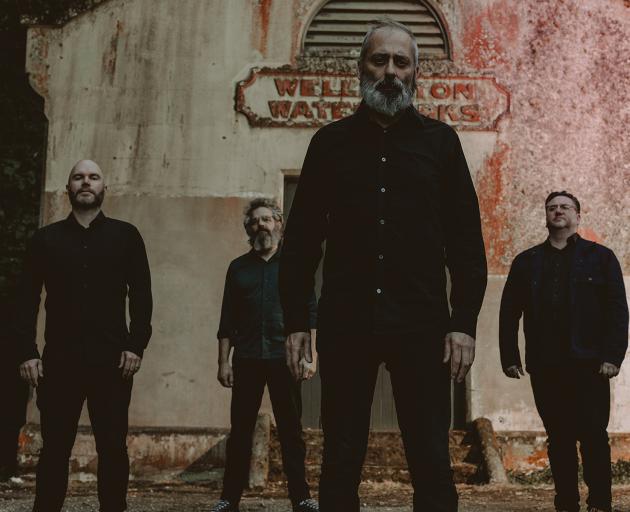 Beastwars plays The Cook on July 6. Photo: David James
Beastwars 2016 release The Death of All Things was also meant to signal the death of Beastwars as a band, Fraser Thompson writes.

"I didn't have anything else to give," says vocalist Matt Hyde. "I thought I'd said everything I needed to say and leave it at that.

"And also the band was breaking up while we did that [album]."

But then, in 2016, Matt was diagnosed with non-Hodgkin's lymphoma and everything changed. He underwent six months of treatment, and that's when he decided there was more Beastwars had to say.

"It was James [bass] and Clayton [guitar] who used to come and see me on Saturdays, that was the beginning of it really early on, and they'd bring their instruments and jam and stuff like that."

Beastwars exists in the crowded stoner/doom rock/metal space, but has always managed to maintain its unique sound. Its first three albums were nominated for best rock album at the NZ Music Awards, and as well as achieving chart success locally, the group has a small international following. A big part of this is down to Matt's skill as a vocalist and lyricist, and on IV he's never been better. All of his experiences of trauma and triumph are channelled into IV.

"When you first get your diagnosis and then they tell you your treatment plan and you have to wait two or three weeks. And those nights are where a lot of the really heavy stuff from the album comes from, because I used to awake in the darkness and think to myself `So this is death; I'm conscious, but there's nothing here' and that would just terrify me that that would be forever.

"Sunset was the saddest thing, but sunrise was the most incredibly strong, beautiful thing. All the cycles of a normal day suddenly become really big.

"But then you start your chemo and then you get to the other stage of it, which is just being horribly sick as it tries to kill the cell growth.

"There were so many different stages, and when I started to do the record I had a lot to draw on."

Hearing Matt bellow "You can never get away from your mortal decay" on This Mortal Decay has a lot of weight to it coming from someone who has faced his decay and spent six months having it forced out of him through the slow poisoning and reconstruction of his cells. The emotional peak of the album for me is Storms of Mars, where Matt attempts to bargain with the universe: "Give me 10 more years ... Let me see you grow."

"I was thinking of my daughter," Matt explains. "She was only 10 at that stage and it just felt really unfair. Not only do I go but I was leaving my kid upset. That was the thing, it was almost like I was screaming at the universe, like `Give me more time until she's older'. And then I can go, then you can take me. You know what I mean?

"And she's 12 now, nearly 13, which is great. I'm so thankful to have this time. There's so much laughter you know? It's just really cool."

In contrast to their previous album, which essentially resulted in the band's destruction, this one was about coming together. The title IV could mean intravenous, or indicate their fourth album, but that wasn't the intent.

"It was supposed to be about us getting back as friends, that's really the most important theme that created that album. Treating each other with mutual respect."

I asked if releasing IV was like the bookend to a chapter of his life.

"I suppose in a way it is and in a way it's not. I mean, my disease you can't cure, so I'm waiting for it to come back. It's always in the back of my head, like how long until the next time. It could be 10 years, it could be one year, it could be 20 years, there's no certainty to it.

"I'm very lucky that I'm young, the average age of this disease is 66 and I got it at 46 so I've got a lot on my side. I'm swimming every day, I have to really look after what I eat, it's changed the equation so much.

"But yeah, I hope it's the end of that era. And I'll be more prepared for it next time because I wasn't this time.

"I'm glad we made it [IV], and that's the thing. I'm really proud that we made a record as good as this, because it's taking a dark time and making the best of it."

The give away
The Weekend Mix has two tickets to Beastwars’ gig at The Cook to give away. To enter the draw, email playtime@odt.co.nz with your name and contact phone number in the body of the email and ‘‘Beastwars’’ in the subject line by Tuesday, June 25.