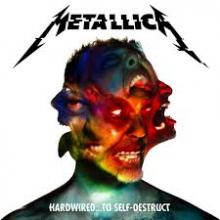 Well, after eight years between albums, the good news is that Metallica has rediscovered how to properly master a rock album.

And the good news doesn't stop there: James Hetfield has lost most of the annoying afflicted "yelp'' he added in the early '90s; Lars Ulrich, who cops a lot of flack for his drumming, really nails it; and Kirk Hammett is still reliably awesome with his tastefully-executed solos.

Hardwired ... To Self-Destruct, against most expectations, is a real return to form.

Love 'em or loathe 'em, when Metallica get on to a good riff, which it frequently does here, the band wrings it for all it's worth.

Now, if only they knew when to end their songs.

Metallica. Hardwired ... To Self-Destruct
Blackened
Four-and-a-half stars (out of five)

For those who like: The first half of Metallica's career