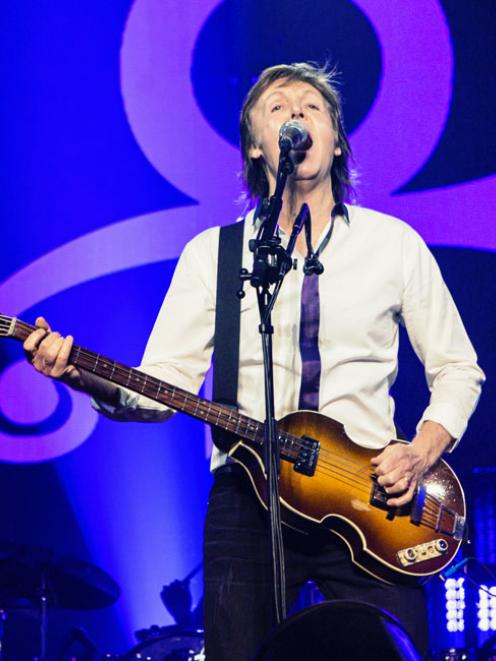 The 73-year-old singer-songwriter gained worldwide fame as part of the four-piece group - which also featured Ringo Starr, John Lennon and George Harrison - but admitted to feeling annoyed when all people want to hear is the band's classic tunes, such as 'Love Me Do', and 'Yellow Submarine'.

Sir Paul said: "We give them what they want as long as they're songs we like. Occasionally we throw in songs and I'll say 'you are not going to like this, but we're going to do it anyway'.

"You can tell in a big arena. When you do 'I Give Her All My Love' the cameras click, click, click and all the lights come on from the iPhones. Then you say 'here's one off our new album' and it's a black hole! But we do it anyway but it is a bit frustrating. You kinda hope they're going to catch on by the end of the tour."

However, Sir Paul admitted there needs to be a bit of give and take between himself and his fans.

He told the Daily Mirror newspaper: "You always like to just do the songs you want to do whether they are hits or not.

"But I'm a realist. If I go to a concert I want to hear the songs I love from that artist, so y'know, if it is the Stones then I am probably going to want to hear 'Honky Tonk Woman', 'Satisfaction', 'Ruby Tuesday'. And if they didn't do then I would feel a bit cheated."

Sir Paul said he can empathise with Beatles fans, revealing that during his younger years, he spent a lot of money to hear his idol Bill Haley perform his favourite song.

He explained: "People pay a lot of money to see me and I remember seeing Bill Haley when I was a little kid, at the Odeon in Liverpool and I paid a fortune, it was months of pocket money to see him. And it was such a thrill because he opened with '1,2,3 o'clock 4 o'clock rock'.

"I didn't want to hear him play anything else. Not really. So I remember that and how much it cost me."