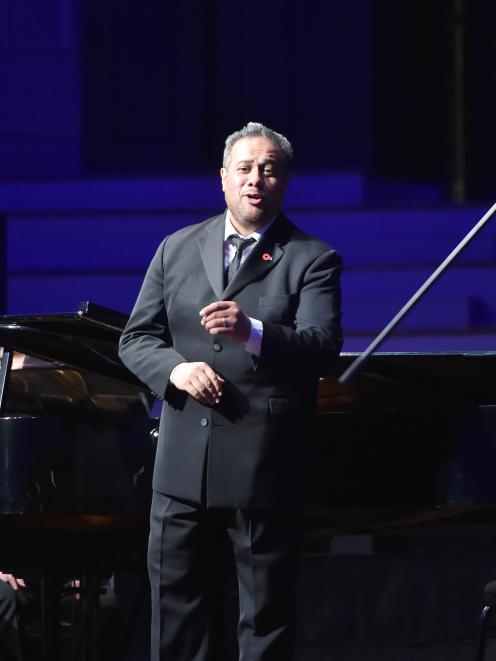 Jonathan Lemalu performs some of his favourite songs in the Dunedin Town Hall. Photo: Gregor Richardson

Jonathan Lemalu, a favourite Dunedin son and a renowned bass, gave a concert of his favourite songs to a near-capacity audience at the Dunedin Town Hall last night.

Lemalu's generous concert, a tribute to his several local sponsors, his formative teacher, Honor McKellar, and numerous friends and mentors, was warmly received with a standing ovation and enormous bouquets.

Their applause won the audience an encore, also designed to highlight the depth of local talent. I am a Bass, arranged by John Drummond with lyrics by Honor McKellar, brought out Lemalu's charm, wit and dramatic flair.

It was the light-hearted culmination of an evening of slightly more demanding repertoire. Accompanist Terence Dennis is deservedly renowned for his generosity to Dunedin and as the accompanist most favoured by Dame Kiri te Kanawa.

The diverse programme gathered together 20th century works from across the western world by Gershwin, Bolcom, Kern, Finzi, Bennett, Rodgers and Hammerstein and Copland.

There were many highlights but several standout items are worthy of special mention. These include Copland's I Bought Me A Cat, Gershwin's Just Another Rhumba and Bolcom's Black Max which were charmingly witty and entertaining.

The Richard Rodney Bennett song cycle Songs Before Sleep was commissioned and composed for Lemalu and most effectively matched his sense of theatricality and his rich voice.

Bennett is also very good at creating an intelligent accompaniment with his signature quixotic rhythms and tight almost jazzy harmonies.

Finzi's Come Away Death and Fear No More the Heat O' the Sun were spellbinding both for Lemalu's interpretative and voice control.

A convivial evening was rounded off with Rodgers and Hammerstein's Some Enchanted Evening and Kern's Old Man River.