Marching to own bleat 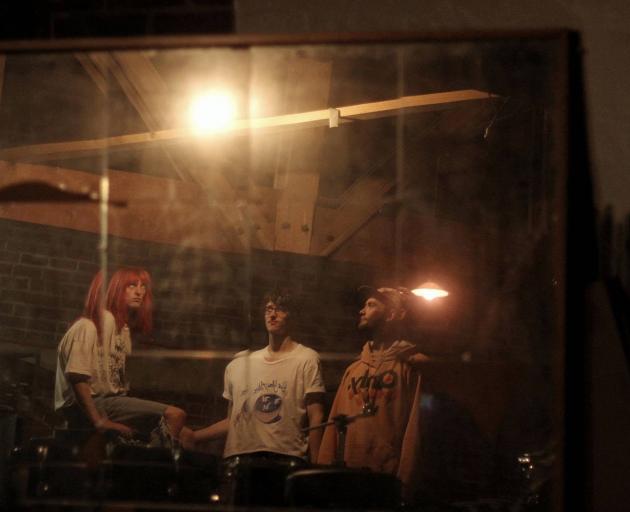 Sheep's the kind of band that likes to go with the flow, follow its buzz, rather than someone else's, Fraser Thompson discovers.

"These are dated so they might taste a bit funny," he warns.

They taste fine to me, and apparently also to drummer Tobias Heeringa and keyboardist Josh Bottz, who eagerly munch them.

I first saw Sheep in July last year at the Crown Hotel. I recall an enthusiastic crowd bouncing to noisy pop songs with infectious bass-line grooves. Video evidence on dunedinsound.com confirms this. The elephant in the room was the fact that it was very obviously inspired by Nirvana, but I didn't mind because it still sounded fresh and exciting.

The next time I saw them was at their single release gig in The Attic last Friday. Graham Matrix wore ripped jeans and a Daniel Johnston "Hi, how are you" shirt, while a Nirvana live VHS played on a small CRT television behind the stage.

I ask them the question all musicians dread: describe your sound.

"Kind of like Nirvana," jokes Graham, then he elaborates.

"The new songs are kind of branching out a little bit more. We still kind of stay true to our roots though. Loud, pretty basic pop songs with heaps of distortion and a whack-as synthesizer as our main bass. Kind of like some krautrock beats ..."

Toby agrees: "I've always tried to take a mechanical and krautrocky approach to my drumming."

Before Graham concludes with: "We're kind of just like millennial Nirvana I suppose."

But I don't think that's fair. Sheep writes great songs, catchy enough for the radio, but with an edge. And its sound, while being unashamedly inspired by Nirvana, is definitely unique. Nirvana didn't even have a synth player.

Also, Sheep's stage presence is probably even greater than Nirvana's. For a three-piece the energy is incredible. Josh somehow manages to ground his fingers to the keys, while the rest of his body flies all over the place and Graham's guitar playing perfectly balances precision and raw noisy output.

"I like to put as much energy as possible into each song and that's just a way for me to kind of chill out in my day-to-day life," explains Graham, "so like all the tension that builds up in my life I just release it in 30 minutes of angry noise."

Josh agrees: "Yeah that's definitely the same for me when we're playing live. What I'm playing is real simple and easy, but it gives me all the more chance to put all the energy into it, into each note and each moment. And then it just goes hard ..."

Sheep's Attic gig was the final one in its tour to promote the upcoming album on the excellent cassette label Trace/Untrace. The first single from it, The Government Can't Take My Benny, articulates a fear of losing something. I asked Graham to go into details.

"Basically, I'm on the benny," he begins, "and there was the election, and Winston Peters had the country by its balls ..."

"But, yeah, I wrote that song in that little existential window and, yeah ... it's just a song that pumps."

It pumps and pretty much epitomises what Sheep is about. It is the sort of band that likes to go with the flow, follow its buzz, rather than someone else's.

The still unnamed album will be out soon-ish featuring more noisy pop songs.

There will probably also be an album release gig.

• Hear it - Listen to Sheep's single, The Government Can't Take My Benny, at sheepsheeit.bandcamp.com