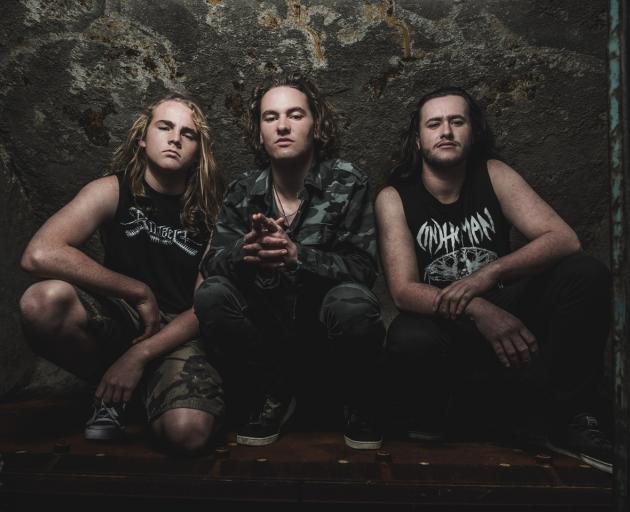 Last year saw them playing the world's biggest metal festivals in Europe in front of thousands of metalheads roaring along with the Te Reo lyrics, an impressive feat but more impressive when you consider that the band's members could still be in high school, if they didn't have better things to do.

Now, they're bringing the noise back to New Zealand for a six-date tour.

I caught up with drummer Henry de Jong to hear about their experiences and plans for the future.

Q Seeing the hordes of European fans supporting you in the RadioNZ doco was pretty amazing. How did it feel standing in front of the audience seeing all those people singing along in Te Reo?

Yeah man, honestly that was one of the best experiences of my life. I'm really pleased with how that tour went and everything that happened, as well as how the documentary came out.

There's probably not many bands this young who've played those festivals. It's quite crazy to think that for a lot of those festivals, we're the youngest band that's played, and probably the first New Zealand band.

Q After playing to thousands at Wacken, will it be weird to go back to playing for hundreds of people in Dunedin?

I feel like club shows are always a different vibe, and I mean getting a whole lot of people jam-packed into one room is just as good as playing in front of thousands of people, I feel. It's just a different vibe and you're much more connected to your audience. I feel like it's not going to be a huge amount of difference in how we're playing.

Q I'm a bit confused. The music press calls you thrash metal, but some refer to you as hardcore or groove metal. What genre do you think you are?

Yeah, that's a difficult thing because we do have a lot of thrash inspiration and songs like Raupatu have a really thrashy vibe. But then we're also inspired by a lot of groove metal bands, like Lamb of God and Pantera, so I think we're a bit of a hybrid. And then adding the Te Reo Maori just adds another layer, so I guess I'm just waiting for someone to classify us as something different. We've had a few people say that we're Te Reo metal, which is kind of a new thing.

Q Are you writing for a new album at the moment?

That's what we've spent the last month doing, songwriting for the next album and just getting ideas. We're going to be doing pre-production on stuff pretty soon and we're hoping we can get something out around April.

Yeah man, I mean we definitely want to keep the ball rolling and keep fresh material coming for people because we don't want to be touring this album for two years - that gets a bit boring.

Q So what are your long-term plans after the Australia/New Zealand tour?

We've got a lot of touring this year, like five and a-half months, and that should be good fun. And after that we're looking at doing more stuff on the album.

Yeah, it definitely is, but I'm looking forward to it.