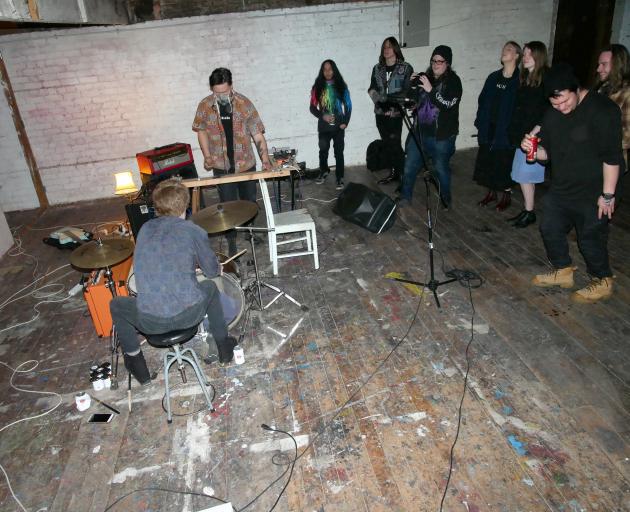 Known for their intense and enigmatic live performances, Night Lunch has been kicking around the local underground for about a year and has just released its first EP, Double Trouble!

I spoke to the two Liams who make up the duo, Liam Dorf Clune and Liam Hoffman, to get the skinny on what they are exactly.

Q How would you describe your music?

Well, we use a lot of distortion. And it's all drop tuned, with hasty drumming, a generally loud and saturated tone. Our songs range from doomy riffs and breakdowns to dance-y pop beats all within a crusty noisy ouvre we have developed. The vocals are yell-y, venting about work, rubbish, industrialism and the mythos around it. The content usually comes out of things we live, observe or joke about, all rolled into one big cathartic and electrified sound! We try to be as big as possible with just the two of us.

Q Your main instrument apart from the drums looks homemade. What exactly is it?

It's akin to a Diddley Bo, a one stringed affordable blues instrument typically for learners, it was developed by poor African American communities in the States. We, on the other hand, in privileged old NZ, have the resources to add another string and a pickup, I [Liam C] built it from found materials. It's more restrictive for writing music than a guitar, but with that breeds creativity!

Q Your single Maximum Wage has been doing pretty great, sitting at No 1 on the Radio 1 Top 11 for a good few weeks now. How does that feel?

Pretty validating, also surprising! It's nice to be on a list with heaps of established bands. We did a minimal amount of advertising and plugging of it, so it must've resonated with the R1 listeners. Also the team there are awesome. We love them.

Q Two Liams in one band: What are the odds?

A four-foot tower of croquembouche with a side of Domino's dumpster pizza and a Dark and Stormy to drink.

Q What should people expect from tonight's album release gig?

You can expect us to play all the songs on our EP Double Trouble and then some. Also we get to play with Dunedin gems Mary Berry (three-piece extraordinaire) and Wet Specimen, which is playing as a two-piece! It kicks off at 9.30-ish, doors are at 8.30pm. It's going to be a big one! You can also expect us to be competing with Fleetwood Mac down the road.