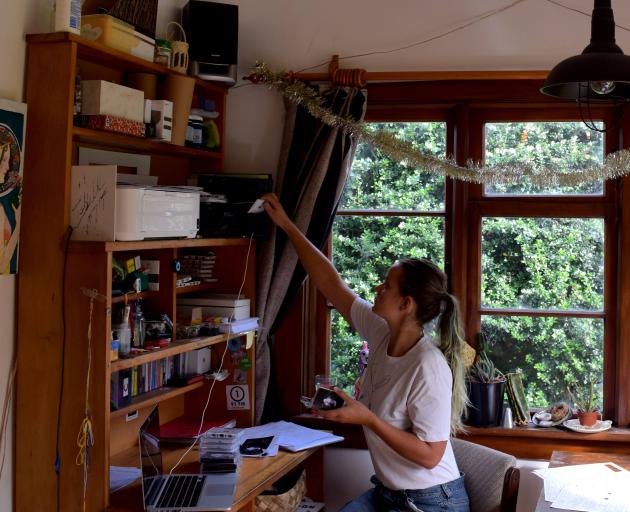 A year ago Julie Dunn and Richard Ley-Hamilton decided to start a record label.

Their main kaupapa was to support DIY and grassroots efforts within Dunedin. Rather than aspiring towards the hulking money-grabbing monstrosities of yesteryear, they wanted to be a "micro-independent" label. They also decided to make cassettes, and they called this project trace/untrace.

"I guess what it actually is, is my arts and crafts project," Julie says with a laugh.

I caught up with Julie in The Attic to see how things are going for trace/untrace one year on, and to try to figure out what sort of space a record label can occupy in the age of Bandcamp.

"I see my role in kind of facilitating people to make their music and get it out into the world a bit easier," she explains.

"I'm definitely not making any money whatsoever and I don't want to, but I do want my bands to be successful, so I guess that's the business model."

So far this process has resulted in five cassette releases. The first was The Rothmans debut EP, followed by Richard Ley Hamilton's solo project Asta Rangu and two Koizilla EPs. Late last year she released the fantastic Yield EP by bedroom-producer Bediquette. Julie also promises a number of exciting releases in the near future.

"I'm happy to release anything if I like it."

Releasing music on cassettes isn't abnormal for the DIY scene, but the resurgence of cassettes is confusing for members of older generations who remember them as those annoying hissy things that broke all the time before CDs came along.

Ironically, those are exactly the reasons why people like cassettes today. When digital perfection is so easily attainable, people crave things that are flawed, and cassettes are cheap enough for independent musicians.

Julie buys blank cassettes online and dubs them in her kitchen. She also prints out the labels and J-cards. The final product feels high-quality and worth the $5 or so she charges for them.

"I think when people are buying music like a physical object these days it's more of an artefact. Like, people can listen to Koizilla at home on Spotify, so it is kind of about the aesthetic for tapes as well as supporting the band.

"I also really like the lo-fi aspect of cassettes. Like, it's pretty hard to get something to sound amazing on cassette but I think the sound that it lends is actually pretty cool. I personally like it."

Cheap recording equipment and free distribution platforms have well and truly demolished the old industry, and music is better off for it. The value of independent labels such as trace/untrace lies not just in being a helping hand for musicians but in being a pillar to form a community around.

Apart from continuing to release tapes, Julie wants to eventually move trace/untrace into other creative realms such as book publishing and 7-inch vinyl releases. But her ambitions for the label are wider than that. She wants to effect change in the community as a whole.

"I think the music that's being made here is definitely top notch. Like, I can't imagine a small music community that would have a higher level or higher quality of music than we have.

"There's not a lot of women around, which is kind of a big source of angst for me because I really want to actively release music and music I love, but I'm incredibly conscious that there's no women on my label at the moment.

"I think that's incredibly sad and that's why I want to do a lot of work in that space."

I'm excited to see what the future holds for trace/untrace.