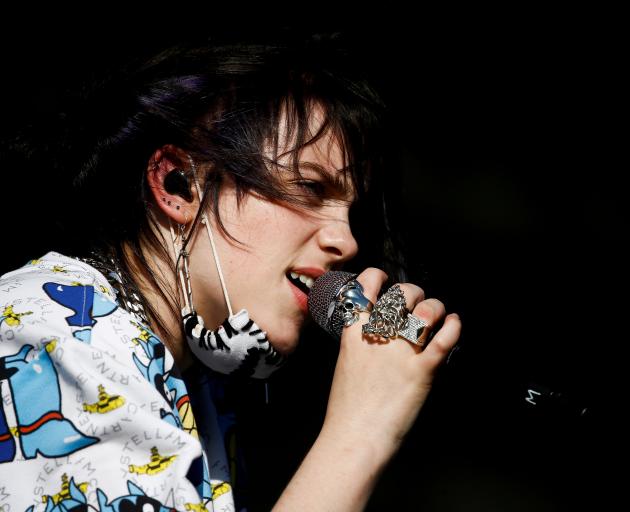 Billie Eilish is nominated in the top-four Grammy categories. Photo: Reuters
A neon green wave has officially washed over the Recording Academy.

Breakout star Billie Eilish, who has adopted the electric shade in many aspects of her look, made Grammy Awards history this week as the youngest artist to earn nominations in all four of the academy's top four categories.

At 17, the LA-raised Bad Guy singer was nominated for six Grammy Awards, notably in the best new artist, record, album and song of the year fields. The singer will also go head-to-head with R&B and rap star Lizzo in those four major categories.

Lizzo leads the pack this year, with eight nominations. Meanwhile, Eilish's brother and collaborator, Finneas O'Connell, was among this year's top nominees with five nods of his own.

Eilish, the fast-rising, anti-pop poster child, was also recognised in two pop music categories, including pop solo performance (Bad Guy) and pop vocal album (When We All Fall Asleep, Where Do We Go?).

But the impressive feat for Eilish wasn't just the achievement at her age, but her ability to infiltrate the four major categories in the same year. Some artists have come close, and have earned Grammys at younger ages, but not been so prominently recognised in the general fields simultaneously.

To compare, Latin star Luis Miguel won his first Grammy Award at the age of 14 for his duet Me Gustas Tal Como Eres. That was in the Mexican American performance category. Years later, in 1997, country-music darling LeAnn Rimes was the same age when she won the best new artist Grammy in 1997.

In 2010, Taylor Swift, at 20, became the youngest person to win the album of the year Grammy for 2008's Fearless, besting works from Beyonce and Lady Gaga. Swift was nominated in eight categories that year, but fell short of the win in both the record and song of the year fields. She was not nominated in the new artist category then.

In 2014, New Zealand-bred singer Lorde made history at 17 when Royals earned the song of the year Grammy. She became the youngest winner in that category's history.

With Eilish's birthday coming up in mid December, she'll be 18 when the Grammys are doled out in January. But, come showtime, she'll still make history if she's regaled in the new artist, record, album and song of the year categories.