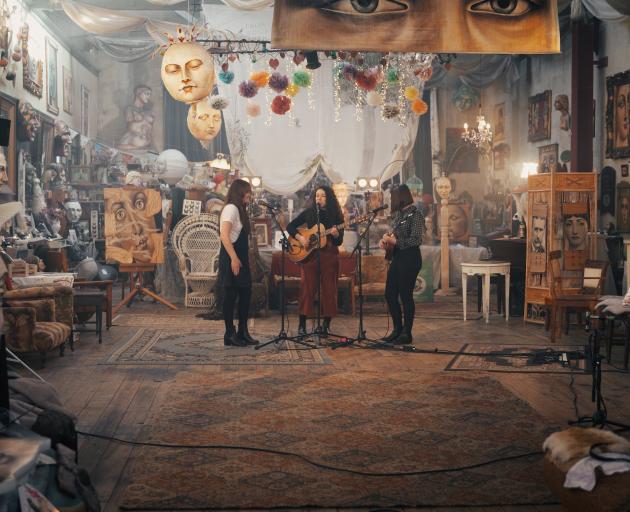 Jenny Mitchell (centre) with sisters Maegan (left) and Nicola at Oamaru’s Grainstore Gallery during the recording session. Photo: Supplied
A mystery of faces float in the background as Jenny Mitchell sings the first lines of the rootsy Travelling Bones.

Then the camera pulls back to reveal two more, these ones though somehow familiar. And more than a little similar.

The pair are Jenny’s twin sisters Nicola and Maegan (16) who add their voices, like only family can, to that first song from The Grainstore Sessions, a new "visual EP" from the southern songstress.

Travelling Bones, the video, was released yesterday, the remaining four tracks on the EP scheduled to drop fortnightly during September and October.

The CD itself can now be pre-ordered on Jenny Mitchell’s website.

Those mysterious floating faces are courtesy of Grainstore Gallery owner Donna Demente. The EP was recorded in the Oamaru space in one take in July, in an effort to capture a live feel, Mitchell says.

The EP features live acoustic versions of songs from her album Wildfires, and a cover — under wraps for now.

The EP’s one-take approach takes its cue from Mitchell’s love of live recordings, something she grew up listening to.

"I remember the Chicks — once known as the Dixie Chicks but now the Chicks — their live tour album was just my favourite thing to watch when I was little. And I listen to a lot of live albums as well. It really is the imperfect nature of it that I have always really loved."

The Grainstore seemed the perfect place to do that, she says.

"I have been very lucky to play there a couple of times and it is very much a beloved venue on the circuit."

The family involvement in the recordings won’t surprise anyone back home in Gore, Mitchell says, but having the sisters out front is breaking new ground.

Dad Ron Mitchell also features, as they all do on a tour planned to start next month.