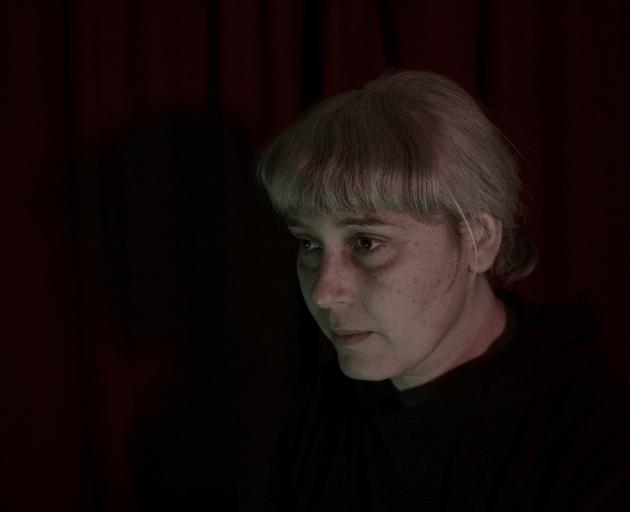 Musician and game developer Stef Animal. Photo: Supplied
The season for spooks is upon us! And since it's apparently also the season for rain and snow, you may as well stay inside and play video games ... spooky ones!! Like The Spooky House, an upcoming video game created by local musician Stef Animal.

"`I used to try and make computer games when I was 12," she explained. "I used to try and copy games I'd seen or whatever on my family's BBC Micro computer. It was really fun, I was never really that good at it but ... recently I thought I'd give it a second shot.

"I guess I wanted to please my 12-year-old self by finishing a video game. Kind of small and as silly as it is, I thought it'd be fun to release for Halloween."

The Spooky House might seem familiar to anyone who has played vintage PC adventure games. Visually it's extremely minimal - just two colours and simple blocky shapes to depict objects in the environment. It's not scary (you can't die), but it's definitely a little bit spooky ... imagine trying to escape a spooky house when all of a sudden a stubborn cat blocks your path! 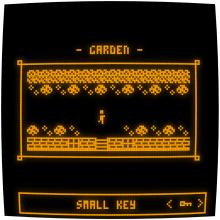 Screengrabs from The Spooky House.
"You kind of run around and you can look at things by just walking into them, and eventually flip screens, and you can pick things up and solve puzzles ... and that's the whole game. It's very much like games I played in the mid '80s, or whatever, with friends."

To create it she used software called PICO-8, which is essentially a "fantasy game console" that runs on modern computers but imposes its own entirely artificial limits, such as only allowing a certain number of colours and even limiting how much code you can write.

"It just reminded me so much of what it was like back in the day trying to make games and how exciting it was, and the possibility of the black screen and what you could imagine ..."

"Constraints end up kind of providing the aesthetic framework, which has a lot of meaning beyond just the constraints, you know, and I think even the warped perspective - it's kind of 2-D, it's kind of 3-D - has a meaning, and the fact that there's only room to shove in a couple of words every now and again to kind of tell you what's going on, but it evokes a lot of meaning."

It's interesting to observe how limitations can stimulate creativity across artforms. Russian composer Stravinsky once said "the more art is controlled, limited, worked over, the more it is free" and it's hard to disagree with that. Given an unlimited range of possibilities it's easy to tend towards the familiar, as opposed to forcing yourself into considering the possibilities within a limited frame. 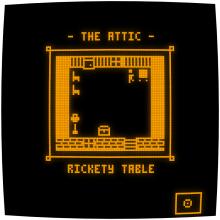 On her critically acclaimed 2018 album Top Gear, Animal followed a similar philosophy: each song focused on the palette of possible sounds from a single obscure sound-making device, such as a Roland MT-32 MIDI synthesizer module or a Cass Creek Electronic NZ Waterfowl Call duck caller.

And, of course, making a game was a great excuse to make a followup to Top Gear in the form of a soundtrack, which will be available on cassette. In keeping with the theme, she used the tracker-like tool included in PICO-8 to create aesthetically consistent chiptune music. Listen to the soundtrack separately from the game and your mind will likely wander to a similarly spooky place.

"It's kind of how I imagined it, I suppose. It's kind of creepy ... there's a tiny bit of singing on it just for variety, I snuck in a tiny bit of a Korg M1 choir sound, but it's 99% PICO-8, so it's all spooky, dramatic, or romantic, or, you know, unsettling. And also just a fun excuse to go on tour."

The tour starts Thursday in Dunedin as more of a Halloween party than a gig so don't expect live music ... but you will be able to see, hear, and interact with the game, in its full cathode-ray glory.