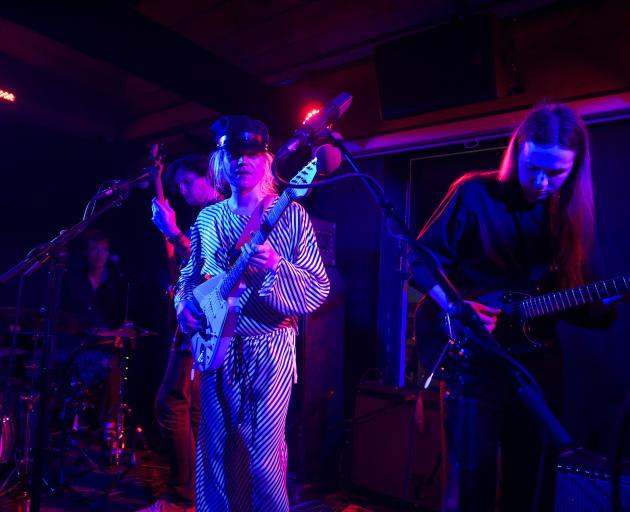 Connan Mockasin performing at the newly-refurbished Captain Cook Hotel in February. Photo: Supplied
As per tradition, we find ourselves nearing the end of one of the many arbitrary divisions of time we've invented to help make the endless expanses of tomorrows more bearable. Also, as per tradition, we inevitably find ourselves in the mood for reflection. What did the last rotation around the sun give us? What did it take? Was it worth it?

At the end of the day at least we've got music, and more of it than we've had before.

On a local level, there's a wonderful mass of music-makers who cart their equipment around and perform to audiences of variable sizes simply because they love doing so. Possibly even more miraculous is the fact that artists who could play anywhere travel long distances to play in a scrappy little city at the bottom of the world.

This year, we had a number of these touring artists. Internationally-renowned New Zealand musician Connan Mockasin baptised the newly-refurbished Captain Cook Hotel in February with his cool slippery hand and turned the entire sold out audience into snats.

In September, Unknown Mortal Orchestra played to a massive, frothy crowd at the Glenroy. I would have preferred them at The Crown Hotel to be honest, but it might have been a bit of a squeeze.

Both were great experiences, but surprisingly some of my favourite gigs were ones with much smaller audiences.

Ben Woods came down from Christchurch in September and played to about 20 people. I felt bad for the band, but it was a highly memorable night for me. There's something about the somber, eerie atmosphere of an near-empty venue, and they played well. Also Wet Specimen, the new project of Opposite Sex's Lucy Hunte, played to about five people at midnight and it was perfect.

Basically, any gig where Coyote played was better than the previous gig where Coyote played, until they hit critical mass and were vaporised. Stef Animal played a historic set next to the ever-expanding pile of speakers at ReStore. AMPED Project demonstrated how great and diverse the high school scene is and made me feel old.

We also had a few big international artists, the sorts which cost us $221,000 in murals and traffic management. Don't be a sucker, $10 will get you a night of incredible live music and you won't have to wait in line all day to get a good spot.

You might recall the minor drama which erupted early in the year when a local band was filmed vandalising a mural of The Chills. It sparked a cross-generational debate regarding the pedestal on which ageing gatekeepers place artists from their heyday because they remind them of what it was like to be young again. The debate rages on.

There's been a lot of shifting of venues, too. Fifty Gorillas rose out of the remnants of Brimstone into a reasonably popular venue for the type of music which suits being on a big stage. The Cook arrived with a bang, before losing a bit of momentum part way through the year and then surged back after an audiovisual upgrade. Between all our venues, we've got a pretty good variety of spaces for live music.

On a sadder note, The Attic, a place of many happy memories, had to close for earthquake strengthening. I feel like an entire music sub-scene developed out of that place, so it's a big loss.

Anyway, thank you to everyone who made music great this year and here's to many more.