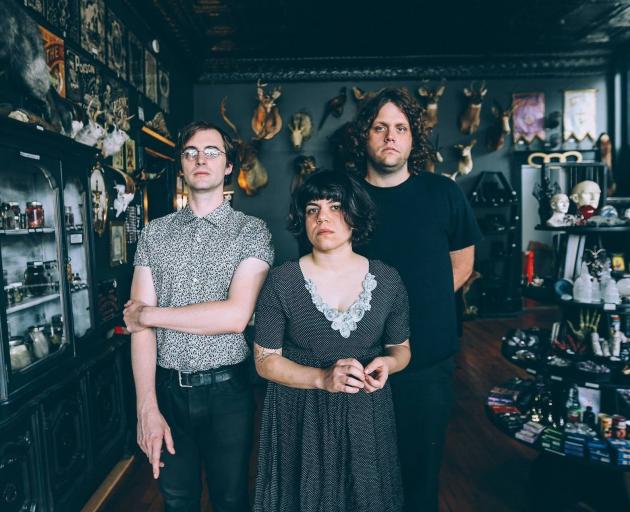 Screaming Females play The Cook next Saturday. Photo: Farrah Skeiky
New Jersey-based rock band Screaming Females have been wowing the crowds of the underground since 2005, and now they're heading to our shores for a five-date tour. I caught up with the band just before their first gig in the Australian leg of the tour.

The DIY scene which you started out in sounds like Dunedin's scene until quite recently. We've lost a lot of DIY venues and now most live music happens at bars. What are your thoughts on the importance of all ages DIY spaces?

Mike: All ages spaces are extremely important. Art and music should be accessible to anybody regardless of their age, gender, race, ability, etc. It's a shame that so many shows have age restrictions. As a teenager, punk music opened a door to a much needed community of like minded people and made me feel less alone in my suburban life. Without all-ages spaces, I don't know what I would have done with myself.

Your latest album's a pretty substantial release and kind of an outlier in your catalogue of mostly shorter albums. How'd you go about making it and what was the motivation to release it like that rather than cutting it down? How do you go about deciding what makes an album?

Jarrett: When we started writing new songs after we finished Rose Mountain we kept running into songs that loosely fell into two categories. One set of songs were big rock songs with a bunch of parts, raging guitars, etc. The other set were songs that felt smaller and were clocking in under two minutes. We started to try to expand the smaller songs to match the length and vibe of the bigger pieces but it felt really forced. The smaller songs just seemed finished in their original forms. Marissa began to compare the group of songs, that would become our album All At Once, to salon-style gallery displays of paintings. In salon-style hanging each wall has one or two large, elaborate paintings which are surrounded by a number of smaller paintings. The smaller pieces are meant to coexist and give context to the main pieces. We really started to dig into this concept for the record. Once we began to arrange the record we realised that the only way to bring this concept to life was going to be to have a double LP. We had one more meeting to decide that that was what we wanted, affirmed our feelings, and went with it!

We have a pretty big gender inequality issue here, women are relatively rare in local bands and while there are some awesome women doing awesome things, the huge majority of gigs have all male line-ups. Is it like that where you're from too? Do you have any ideas on how to tackle the issue?

Marissa: Screaming Females have been lucky enough to play bills including many other women and queer people for the bulk of our career. I never thought about it much until people began to bring it up. There is no easy solution to gender disparity in any discipline. I think the key is to fearlessly pursue what you want regardless of your race, gender, age, etc - and not to let naysayers malign your desires simply because you are the way you are.

What do you want people to take away from your gigs here?

Marissa: We strive to play well and put on a damn good rock show.