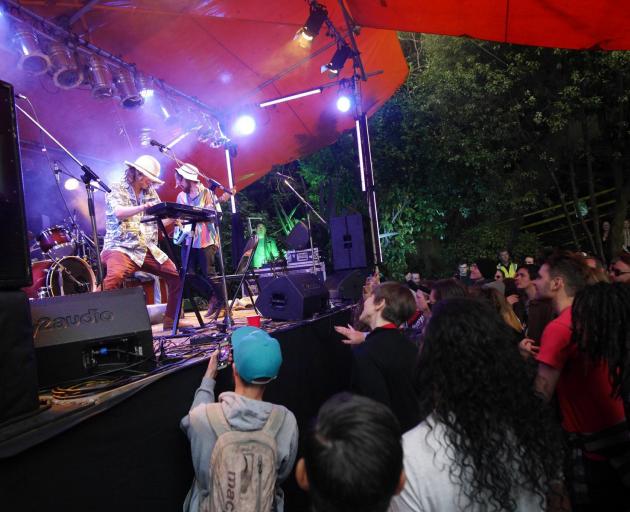 The 2019 edition of Feastock gets under way at noon today. PHOTO: SUPPLIED
Finally, the wonderful time of the year when the public holidays align and we get two gloriously long weekends to eat chocolate and acknowledge the horrors of war respectively, writes Fraser Thompson.

In between those activities you might find yourself listless and looking for something to do. Well, look no further. This week happens to be one of the most packed weeks in the history of local music.

First off there's long-running backyard music festival Feastock, and if you're reading this on Saturday it could be happening right now, so you'd better get on a Lime and head north. The line-up this year is one of the best, wonderfully diverse in every sense of the word, from country bluegrass to metal and stoner rock. Good vibes are guaranteed even if good weather isn't.

Somehow Internecion Productions managed to get US-based noisy doom metal band Primitive Man to make a New Zealand tour which includes a stop in Dunedin. It's mindbogglingly awesome, and even better is the fact that they're playing at Dunedin's best venue, The Crown Hotel, with Methchrist and Swamp Dweller. At $30 it could be the most you'll ever spend on a gig at the Crown Hotel, but it'll also be the most crushing cesspool of misery and rot you'll ever experience!

The Crown Hotel. Tickets $30 from undertheradar.co.nz

This is an early gig, starting at 6pm, so it'll be a nice way to start your evening. Billed as "the noise show where nothing is louder than the coffee grinder'', and featuring legends of the experimental scene such as Michael Morley and Eye.

The Auckland based four-piece's first album Might As Well Be Cabbage dropped a few weeks ago. It's minorly grungy and majorly real - angry and sad about all the right things. Also it gets heaps of props for the lyrics "Avocadooo ... I love youuu ... Your soft green flesh makes my mouth wet. I can't afford you, but I adore you''.

It should be pretty mint.

This is massive. Twenty (!) heavy and/or extreme bands from around Aotearoa playing day and night at The Crown Hotel and it's just $25 for the whole weekend. Crazy. Highlights include Dunedin staples such as The Rothmans and Bazooka as well as out-of-towners Unsanitary Napkin and Long Distance Runner. It's kind of amazing actually, huge respect to Dance Happy Doom Crew for making it happen.

If you're a billionaire and could afford tickets when they went on sale months ago you'll have a great time seeing the pop-jazz legend, if not, you're out of luck because it's sold out. Might have to just stick with playing Feels Like Home through the phone speaker on the way to Dankfest.