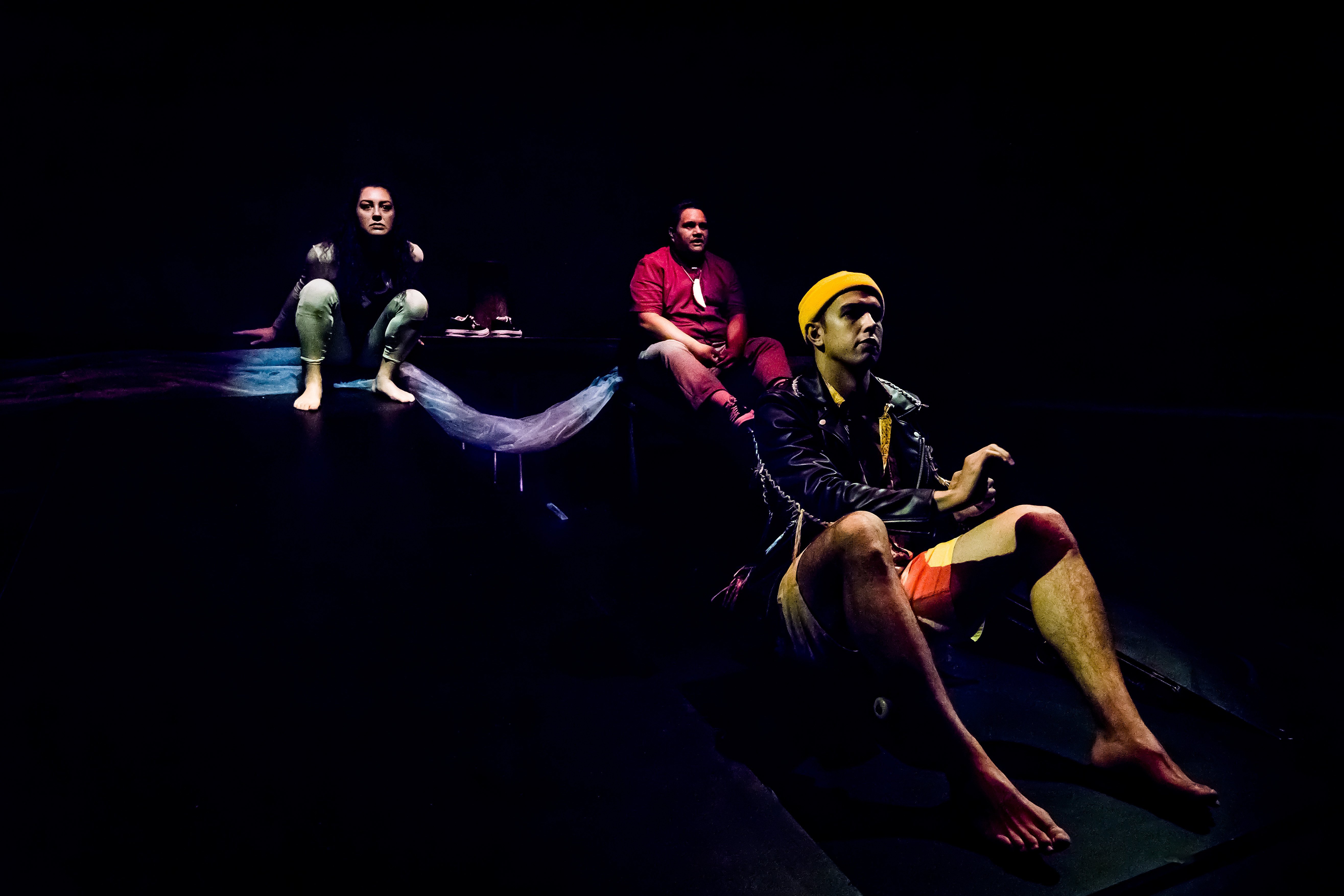 Sing To Me cast members (from left) Emma Katene, Rutene Spooner and Te Aihe Butler in scene from play. Photo: supplied
There have been a few babies born during the gestation of new play Sing to Me.

It was after the birth of playwright Alex Lodge’s first child that she began thinking of the themes that were to come together in Sing to Me.

"Life has imitated art and the other way around as well. It started because I was thinking and talking to friends about becoming a mum."

It initially came out of the story of Pania and the Reef and a trip to see Mana Mahuta.

"We realised because we weren’t making the story with the iwi it couldn’t be just the Pania story, so it became this amalgam of lots of different stories and what is happening with climate change.

When her son was 2 and they were starting to teach him te reo, what it is to be Maori and Pakeha, they were thinking hard about the values they wanted him to have.

"Navigating those values, they really become so much more concrete when you are raising a kid. It’s not just theoretical anymore ... you have to stand behind those values you said you have."

Some of that thinking has come out in Sing to Me’s relationship between its main characters, mild-mannered optometrist Ata and fierce sea maiden Whetu, who fall in love, have a child and have to navigate cross-cultural relationships.

"A lot of the playful stuff about trying to be culturally aware but like over correcting stuff — what Ata does to Whetu, a lot of that is about those cultural lines you walk with someone from another culture."

It was further inspired by friends’ experiences in relationships with people from other cultures and who spoke different languages.

"All of these things are bigger parts of who we are and impact on your relationships."

Lodge has gone on to have her second child, who is just 3 months old, while the play’s director Miriama McDowell has also had her second baby.

"It’s been a very family kind of fertile development period. Having young families has really been part of the process as well being what the play is about."

A lot of Lodge’s life appears in the play in subtle ways — not just being a new parent.

Music is an important part of the play, and musician and performer Te Aihe Butler (Modern Maori Quartet) brings that to life.

"When I was a teenager I really wanted to be a singer-songwriter pop star, so there is a definite part of me fulfilling that dream bringing music into things."

On a more serious note, she says music is very much part of New Zealand and there is rarely a social occasion where music does not feature.

"We’re a very musical country. It’s part of our fabric, our identity. Sing to Me is about falling in love and music is a big part of how people fall in love and how they connect." 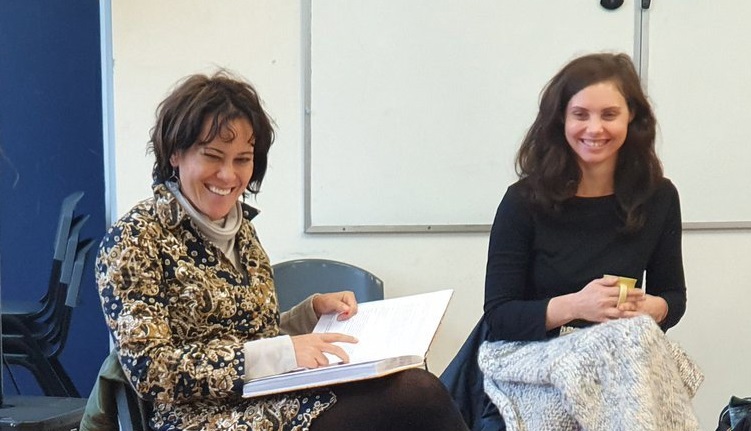 As the play has been developed over so many years, Lodge has seen four casts work on it.

"It’s really amazing to see how each time the actors each bring something completely different to the characters."

"Rutene is such a powerhouse. He’s a virtuoso performer. He’s an amazing singer and actor and so charming.

"It’s amazing to watch Te Aihe and Emma rise to the challenge or he could easily upstage everyone."

Lodge says watching them perform she often forgets they are using her words, as they take "beautiful ownership" of them.

She admits it is a bit "crazy" watching it with friends and family whose experiences strongly fed into the storyline.

"My partner’s read every draft so wasn’t in for too many shocks, but we were still clenching each other’s hands weeping as we watched them go through new babies, sleepless nights and all that stuff.

"It’s surreal how the stories [are] once theirs, then become mine to tell and now they are out there."

Playwriting is a huge part of Lodge’s life. She completed her PhD in playwriting at the University of Waikato with a research project on the theory and practice of accessible theatre in Aotearoa New Zealand. This involved developing a trilingual script in te reo, New Zealand Sign Language and New Zealand English.

Her interest came out of working on a bilingual show At the End of My Hands, about deaf life in New Zealand, in English and sign language with four deaf actors.

It was her first introduction to deaf theatre and deaf culture and she learned sign language by immersion during the rehearsals and performance of it.

"I was blown away by how many amazing actors there were, how there were pockets of talent we just didn’t see on stage."

So she decided she wanted to find ways to advocate and provide practical artistic support for artists.

That has in turn led her to an unexpected job - as access co-ordinator for the Auckland Festival of the Arts.

"It’s a day job that I love. I never thought it would be a job for me but the more I learn about it ... There are just so many amazing artists that just need that extra support and access."

Having an artist who knows about other artists needs providing that support makes it so much easier.

In between parenting and her "day job" she has continued to write and her most recent project is a play co-written with Cherie Jacobson, Modern Girls in Bed, which showed at Circa in 2019.

"It was where I met Miriama."

She also acted in the play which features a lot of female figures from New Zealand history who appear to two millennials who have decided to go to bed for the rest of their lives. Lodge played Katherine Mansfield.

In the second half, the women reappear to the girls as their Aunties and support them through the loss of their mother.

"There are themes I’m interested in. What it means to modern women and connected to history, how vulnerability is portrayed as a strength, not a weakness. It’s something I’m really interested in as a storyteller."

She admits being able to do these projects is due to having a supportive partner and living in Hamilton where her parents live.

"They are my biggest fans so are very supportive, making sure I get a couple of hours a week to just sit down and write."

That is not to say she does not grab any opportunity.

"I’ve been known to have the baby in a front pack asleep and work standing at the bench on my laptop. However I can make it work."

Sing to Me, Taki Rua Productions
Mayfair Theatre, May 31-June 1