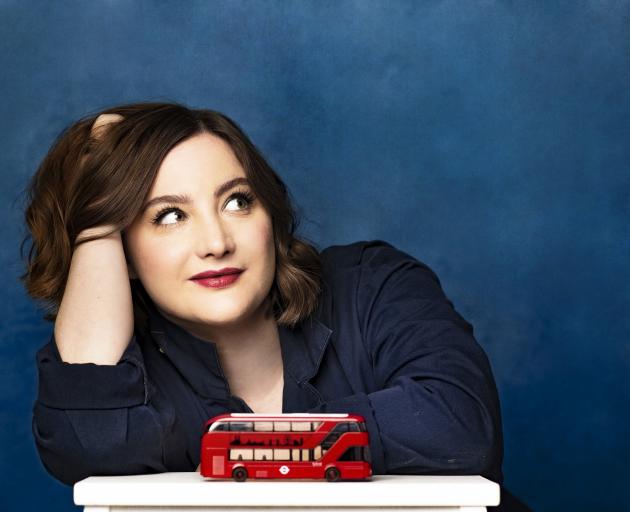 Australian comedienne Laura Davis is getting to experience life in New Zealand due to Covid-19 instead of working in the United Kingdom. PHOTO: MAT CROC
Australian Laura Davis is an award-winning stand-up comedienne and writer in her home country and critically acclaimed in the United Kingdom. Being caught up in Covid-19 travel restrictions has given her an opportunity to make a name for herself in New Zealand as well, she tells Rebecca Fox.

Laura Davis is homesick for Australia.

That’s not something you want to admit when you have been trapped in New Zealand for more than a year.

That is not to say Davis is not grateful for being in New Zealand where thanks to the "team of 5million" she is safe and able to work, but the London-based comedienne and writer had been so looking forward to returning home early last year via the Cape Town Comedy Festival and a tour of South Africa.

Her husband, Kiwi comedian James Nokise, had headed home to visit family and record a podcast with Radio New Zealand.

Davis was then heading to Australia to see family and perform at the Melbourne Comedy Festival. Then Covid-19 hit, Melbourne cancelled its festival and New Zealand announced it was closing its borders.

Davis decided the best plan was to head for New Zealand to be with her husband.

"I made it with 30 minutes to spare. It was a close call, very stressful, dramatic and expensive. It was a real rush to get here on time."

At that stage they were thinking they would be here for "a few months at the most" before heading back to London.

"Looking back now, we had no idea."

It soon became obvious New Zealand was going to be home for a long time. A few months later, they watched via Zoom as their landlord packed up their London flat.

Despite the dramas, Davis says they are both happy and excited to be in New Zealand.

"We are working more than most comedians in the world."

It is Davis’ first proper visit to the country. She has been able to get to know her in-laws and travel to the South Island for the first time.

The time has enabled her to start to build a name for herself here by performing comedy gigs and at festivals.

"There’s been a huge upside. We are definitely not complaining. It’s just been wild."

However, she is pining for family she has not seen in a couple of years.

In the meantime, she is making the most of the opportunities such as the Dunedin Fringe Festival, where she is appearing in a comedy line-up including Nokise, Chris Parker, Tom Sainsbury, Nick Rado, Jeremy Elwood and Michele A’Court.

The situation with Covid has meant different things need to be taken into consideration when developing material, she says.

"This last year has been very interesting. I like to work backwards from the way I want an audience to feel during the show. You want it to be relevant and it has to be relatable. You have to be saying things that they need to think about and want to engage with."

So it had been tricky working on her new show?

"People are craving live experiences. People want to have a very fun time. Stand-up was on pause or off-limits during the pandemic, but one of the things people want post-lockdown is a live group experience.

"I’m just the excuse for people to get together. I’m throwing my own little party every night."

Her Dunedin show is the one she had expected to debut at the Edinburgh Fringe.

"Now it’s going to debut in Dunedin. It’s great to finally get to bring it out."

She started writing the piece when Australia was grappling with bush fires in the summer of 2019-2020.

"I had no idea we were about to move into a global Covid disaster, but it has just enough apocalyptic sensibility to feel relevant. You are always working on a show, incessantly updating it."

She wanted the show to feel strong and uplifting — a proper catharsis for the past year.

"I think it has made us realise how valuable even the smallest relationships are in life."

COMEDY is a passion Davis has been honing since her late teens.

She was watching an interview where a comedian was telling the story about how they got into comedy when she realised it was what she wanted to do.

"I knew nothing about the live-comedy scene, but I knew I really wanted to do it."

"I love being there with an audience and I love the writing process. I love making things. Most of all, I like how it’s one of the few art forms where there is no buffer between you and the crowd."

She admits it can be "brutal", but that is part of the "thrill and rush" of being open and vulnerable on stage.

"It really keeps you in check. It’s probably the same rush as a bungy jump, but you sort of get used to it. Weirdly, I feel most comfortable on stage, the clearest. A lot of comedians experience that. It’s a weird way to be but it sort of makes sense."

She worked in Perth for five years before moving to Melbourne — "it’s still home for me" — where she continued to work on her writing and comedy.

Davis made a name for herself in 2008 as a national finalist in the Melbourne International Comedy Festival (MICF) RAW competition. Since then she has performed at the festival 10 times with eight different shows.

Her sixth offering, Ghost Machine, won her the Golden Gibbo and the Melbourne Fringe Best Comedy Award in 2015. Marco Polo, her 2016 show for MICF and the Adelaide Fringe Festival, won her the prestigious Comedy Channel Moosehead Award.

She also used her skills as a writer on the seventh and eighth seasons of Australian television’s satirical news and current affairs programme, Mad As Hell.

She has also performed stand-up on various Australian television comedy shows and specials.

When some of her scripts were picked up by the Edinburgh Fringe Festival and then the BBC for development, Davis decided to move to the UK.

She made her debut at the Edinburgh Fringe debut in 2017 with Cake in the Rain and returned in 2018 with a reprise of Ghost Machine. Both shows went on for a run at London’s Soho Theatre. In 2019, she returned to Edinburgh with Better Dead than a Coward, which also received critical acclaim.

It was at the Edinburgh festival that she met Nokise.

Being married to a fellow comedian was a good thing as he understood the work commitments and hours of the industry, she says. It has a very complicated income stream and touring schedule.

"It’s hard to find someone who doesn’t mind you coming home at 2am in the morning. Comedians are not necessarily a barrel of laughs in their own lives."

They often bounce ideas off each other and are often brutal when telling each other if a joke is funny or not.