Former dancer and choreographer Emmett Hardie is no stranger to treading the boards at the Globe Theatre, but Larnach - Castle of Lies marks the first time he has taken the leading role backstage. 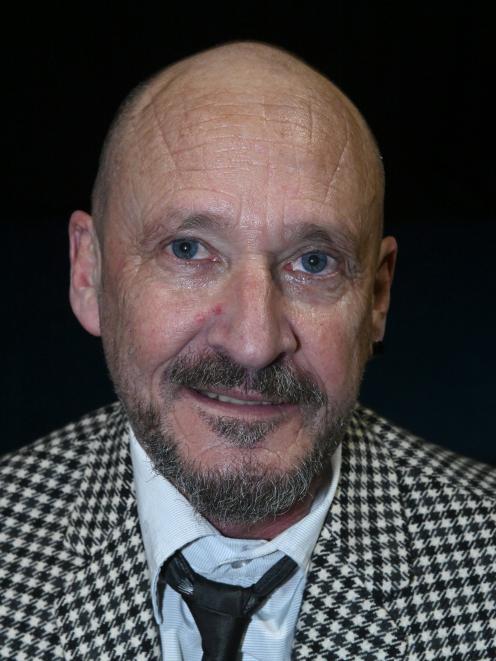 Emmett Hardie
''I've been on stage since I was 6, so it's my happy place,'' Emmett says.

But for the past two and a-half years he has been ''percolating'' on getting the play by former Burns Fellow Michelanne Forster on stage.

''I've got pretty clear ideas of how the play should be done, so I've driven the actors to follow that.''

He had originally looked at another play about Samuel Marsden but realised it would be difficult to cast in Dunedin. When he read Larnach he discovered it ''reeks as great theatre''.

''All of her plays are interesting and this is one of her earlier ones.''

The play was first staged by Christchurch's Court Theatre in the early 1990s and then by the Fortune Theatre in Larnach Castle's ballroom.

Larnach tells the story of William Mudie Larnach, one of New Zealand's wealthiest and most powerful colonial politicians and the man behind one of Dunedin's most prominent tourist attractions, Larnach Castle, and focuses on the final 10 years of his life.

The play opens with the wedding reception for Larnach and his third wife, Constance de Bathe Brandon, and follows the family dramas through to Larnach's death by his own hand in Parliament House.

''She inherited this grown-up family and that is where the trouble starts.''

The machinations and family politics of Larnach (played by Craig Storey) and his six children - Donald, Douglas, Kate, Colleen, Alice and Gladys - by first wife Eliza Guise form the backdrop for the play but it is the rumoured relationship between Constance and Douglas, who were thought to have fallen in love.

''It's a case of a house divided ... Larnach feels he cannot be loved anymore and that no-one loves him.''

Soon after his daughter Kate dies from typhoid fever, the politician and businessman starts a downwards spiral and believes his children, with the exception of Douglas, the ''dutiful'' one, are all degenerates and harpies out for his money.

His second-youngest daughter, Alice, is very scheming and plots to confirm the affair between Douglas and Constance. She finds a letter between the pair which she gives to her father.

''Larnach is in deep financial straits at this time with the Colonial Bank, so it's not known in the end whether he kills himself due to the financial pressure of bankruptcy or ... ignobility of the affair.''

The Globe's Keith Scott says the story is far from a historical re-telling.

''It's the playwright's prerogative to take a juicy story. It is part of the Larnach family story that it [the affair] did happen.''

The playwright is asking ''Is Larnach's behaviour, which ends in the ultimate tragedy, a family tragedy rather than a financial one?''.

While the siblings fought among themselves, they all liked Kate and despised Constance.

''They think she is there to pick Larnach's pocket and disinherit them.''

Alice, the provocateur, is young and spiteful, while Colleen wants to make sure the family does not turn on itself.

At the end of the play, Larnach's will is read and what is left of the family fortune is divided among three of the children: Donald, Colleen and Alice.

''Douglas gets nothing. Constance gets only her wedding jewellery. And the others get 71. They're just aghast.''

TO SEE
Larnach — Castle of Lies, The Globe Theatre, November 14-23.

On Friday evening my wife and I had the pleasure of attending. For those of you who would not normally find yourselves in a seat at an intimately seated theatre watching a play, I would encourage you whole heartedly. The whole production was very well staged, the acting, although amateur, was excellent. On many occassions I found myself totally enthralled and drawn into the stage play. My thank you for all those involved, your talent and energy will stick in my mind for a very long time. Craig Storey playing William Larnach and Jen Foremen playing Olive Bates were especially excellent in their roles. Warren Chambers playing Basil Sievwright was not only humourous but took on his role well. All of the cast, their determination and energy, just excellent! This sort of thing is what makes Dunedin a great place to live. The following evening, we had a Xmas function at Larnach Castle, so a very fitting weekend. Great show, thanks again everyone involved.