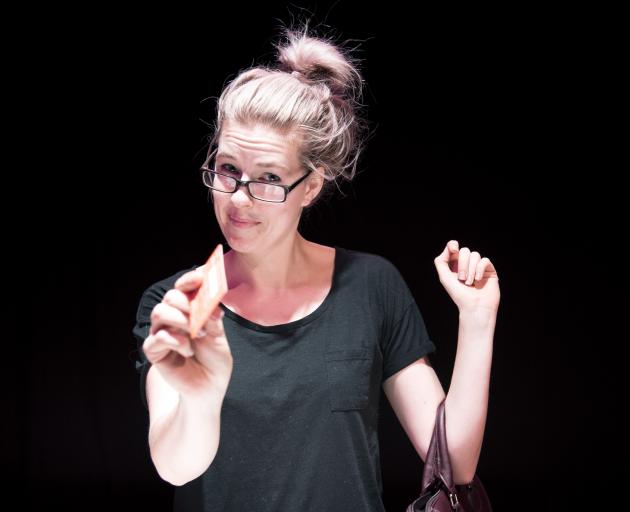 Actress and playwright Robyn Paterson plays a ‘‘65-year-old heterosexual couple’’ in her one-woman show, The South Afreakins. PHOTOS: SUPPLIED
It will be Robyn Paterson’s first visit to Invercargill when she brings her one-woman show to the Southland Arts Festival. She tells Rebecca Fox about how her show, The South Afreakins, resonates with many people.

Getting your parents along to see a show you have written and perform yourself is nerve-racking enough, but when the play is about them the nerves ramp up further.

"I didn't tell them their names had stayed the same and everything in this. I can't even tell you how nervous I was,'' actress and playwright Robyn Paterson says.

If that was not gutsy enough, she debuted the full-length version of the play - The South Afreakins - for the first time at the Edinburgh Festival Fringe, one of the biggest arts festivals in the world.

"I didn't think it was a massive undertaking. I felt it was a safe place to do it. I thought I couldn't be the worst among 3500 shows.''

In both instances, the risks paid off.

Her parents were "chuffed'' at the work which, with "a lot of creative licence'', is their story about immigrating from South Africa to New Zealand.

And The South Afreakins was a success in Edinburgh 2016. Its 28-night run "98%'' sold out, garnered great reviews and was awarded "The Best Monologue at the Fringe''.

It was all a calculated risk for Paterson who has appeared on Shortland Street, Go Girls, The Blue Rose, Anzac Girls and Power Rangers.

The story is about Helene and Gordon who are stuck in South Africa and in a rut - one longs to get out and experience everything retirement has to offer, and the other won't leave his milk tart. When they finally immigrate to New Zealand, they discover it's hard work to find "home''.

"I play a 65-year-old heterosexual couple - there is this element of risk. It's quite cathartic playing your parents on stage.''

It started out as a 10-minute theatre piece for the Short + Sweet Festival in 2012 and won accolades in Wellington and Sydney.

"I kind of figured I had something pretty good on my hands.''

That was enough to encourage Paterson to set up her own theatre company and set about creating a 60-minute version of the show.

It is a story based on her family's life. They immigrated to New Zealand in 1994 from South Africa and settled in Hamilton when Paterson was 6 years old.

"It doesn't affect you hugely when you are that young, but there is a lingering feel. I know intimately that idea of not fitting in.''

While she speaks with a Kiwi accent, Paterson feels more at home with South Africans when she meets them.

"It's oddly comforting, hearing their accents, their mannerisms. I feel like I'm back in a place where I belong.''

She sees in herself the blunt mannerisms and the tendency to say what they think that South Africans are known for.

"Our humour is different. We're going 'Go the Springboks' while everyone is cheering for the All Blacks, so I think I've felt a touch of that all my life.''

Paterson called on those feelings for the piece, which is a monologue between Helene and Gordon.

"I flick between the two. I wear black, so it's done with voice and posture. There have been a few times where there has been a split second where I've wondered where the other character is supposed to be standing.''

The expatriate community in Edinburgh - South Africans, Germans, Norwegians and even those who did not speak English - all appreciated the themes of displacement and starting over.

"The themes are universal. The idea of trying to fit into a new environment or new country; people can relate to those themes.

On the back of her success at Edinburgh, Paterson was invited to perform The South Afreakins at the London Vault Festival and subsequently sold out there.

She has brought the show to New Zealand, performing at the Creative Waikato Space, The Meteor Theatre, The Basement Theatre and The Hawke's Bay Arts Festival.

"It's nice to fall into the characters. It's so choreographed and rehearsed now it feels like a dance.

It meant she could throw in an extra line or two if she felt herself getting bored.

"It's nice to be able to improvise.''

The sequel is the result of needing a bit more of a challenge and also because of the response to The South Afreakins continues to be so positive.

So to up the ante there are four characters for her to play in the sequel, although she admits it makes it hard sometimes to remember who she is.

Being the writer it means she can adjust and ''devise a way though'' when things don't work for her.

"It's just me in an empty space going over and over it, so if it doesn't sit right, I can change it.''

There will be a nod to the first show in the sequel, and her "parents'' return as it is Gordon's 70th birthday, but the themes move towards growing old and growing apart.

"The sacrifices in relationships you make as your idea of happiness changes.''

The success of that first run of shows in Edinburgh meant she had high expectations for herself and her theatre company.

She describes her life as "adventurous'' and is "super grateful'' to be doing what she loves.

Drama has always been her first love. She headed straight from school to study at the New Zealand Unitec School of Performing and Screen Arts in Auckland.

"I was a very attention-seeking child, so Mum put me on stage and the game was over. I never wanted to do anything else.''

She then went on to study at The Neighborhood Playhouse School of Theatre in New York, otherwise known as The Meisner School.

The South Afreakins, Southland Arts Festival, Repertory House, May 8 and 9, at 8.15pm.