Taking Globe on the road 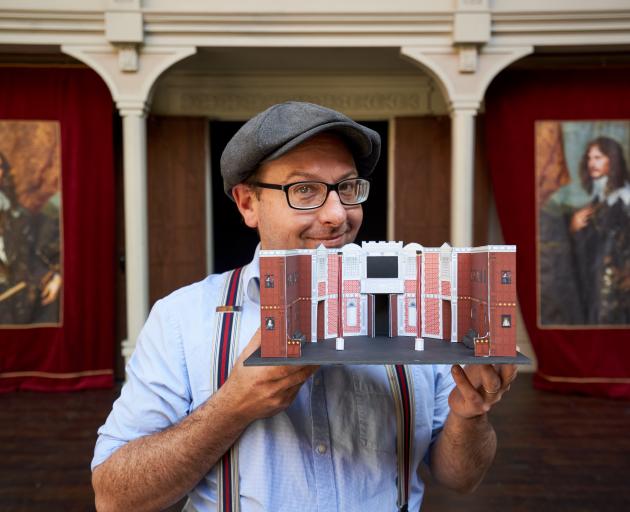 Pop-up Globe founder Dr Miles Gregory with a model of the set he is bringing to Dunedin. PHOTO: SUPPLIED
Transforming wild ideas into reality is what Dr Miles Gregory has come to expect of his Pop-up Globe team since he first came up his "long shot" idea of recreating Shakespeare’s Globe in New Zealand,  Rebecca Fox finds.

Hearing  his father quote Shakespeare to him instilled a love of the bard in Dr Miles Gregory from a young age.

"The words are important, the great stories. You could spend a lifetime with Shakespeare and never get to the bottom of his genius.''

That love ultimately left Gregory taking a risk he describes as what could have been the "biggest failure in New Zealand theatre history''.

"We did say we'll fail big and fast. Life is too short to not ever give things a go.''

Instead, the world's first full-scale temporary working replica of Shakespeare's theatre, the second Globe, opened in Auckland in 2016 to a record-breaking 12-week run of productions - it attracted a total audience of 103,000 over 127 performances - and has gone on to rave reviews and extended seasons in Melbourne and Sydney.

"I never thought it would be as popular as it has been. I hope we have our own place in New Zealanders' hearts as the national Shakespeare Company,'' the Pop-up Globe's founder and artistic director says.

The team has just completed its fourth season from its home since 2017 at Auckland's Ellerslie Racecourse.

This year, they decided to take it a step further and tour New Zealand, meeting the "huge number'' of requests the company has received from throughout the country.

The trick was to do it in a way that did not require the "vast expense'' of dismantling and recreating the Globe at each stop.

"Now, for the first time, we've created a touring set and shows that bring all the magic of Pop-up Globe performances - the blood, the incredible audience connection, the dances and song, and above all the remarkable art of Shakespeare done well - to existing theatres.''

But not content to just bring any old set touring, Gregory had to base it on Shakespeare's own company.

"When they were not performing on the South Bank due to plague or winter, they'd tour the medieval manors, theatres and universities, moving to indoor theatres.''

Rare documentation from the 1620s indicates he converted a cockfighting arena into a semicircular stage.

"We've reproduced this for the set, combining the ideas of Shakespeare's touring company with this amazing indoor set.

"I'm very lucky I have a team of experts that can translate the wildest ideas into reality.''

They looked closely at the historic document and then, from that, created scale models of the theatre.

"We've built the set here in Auckland and will do the technical rehearsals here. It's a very beautiful set and will provide this incredible atmosphere of indoor court theatre.''

So, while audiences will not get the same open-air experience as in Auckland, where audience members stand close to the stage, they will not miss out on the "magic'' of that theatre experience as there will still be the usual "hijinks'', he says.

"There are many important elements to the Pop-up Globe experience - and the theatre surroundings are just one of them.

"What's most important is the performance on stage and our actors' relationship to the audience.

"We have designed an extraordinary set that recreates the atmosphere of our Auckland home theatre, including seating for some lucky audience members on stage, in the heart of the action.''

While not as expensive to move as the Pop-up Globe, it is still a huge undertaking to take the new set on tour.

"We've got to pack it all up. The sheer scale of taking it on the road is major.''

As they are performing two plays, Hamlet and Measure for Measure, props - right down to the chandeliers - for both are needed, as are the Jacobean costumes for both. There are 14 actors touring as well as musical performers.

"We need our own washing machine, two dressers, three stage managers and then there's the logistics of actors and directors coming in. It's a big operation, one that is very rare in New Zealand, I think, for a classic production to tour the country.''

The two plays have been chosen for their different strengths - Hamlet is a "big hitter'' well-known tragedy - while Measure to Measure is a fast-paced topical piece about the abuse of power and sexual assault.

There will be challenges ahead as the cast and crew adjust to the different sizes and facilities of each stop's theatres. They have been looking closely at plans, videos and photographs of each venue.

"They are all quite different spaces, so, during rehearsals we'll be working out how to use each auditorium.''

English actor Jonathan Tynan-Moss, who did the Pop-up Globe's first season of Romeo and Juliet and As You Like It in Melbourne, has returned to the company to tour to play Laertes in Hamlet and the Duke in Measure for Measure.

"It's a joy to have him back. The cast is very international but 75% are New Zealanders.''

Tynan-Moss, who heard about the Pop-up Globe while in drama school, has been constantly drawn to Shakespeare's works - the blood and guts, sex and violence, the hilarious comedy and the tragedy - it runs the full spectrum, he says.

"It's how relevant it still is. The ideas in the plays feel like they were written about yesterday.

"It is interesting how little we've come in the last 400 years or so. We're not good at learning lessons.''

Coming back to New Zealand was a "no-brainer''.

"I love the company and the work. It's to an excellent standard and you have a relationship with the audience that is unlike any other theatre I've worked in before.

"The live feedback from the shows, I love that connection you have with the audience. It's a buzz I have not experienced anywhere else.''

Performing Shakespeare required different skills as it was like working in a different language.

"I see our first job as actors is to tell the story the best way you can - the audience can't care about the story if they can't understand.''

That meant a lot of hours learning the script and rehearsing.

"There are no short cuts, you've just got to sit down and learn them like the times table. It's hard work and it takes hours but once it's in there you can live it and breathe it rather than searching your mind for that line.

"I did wake up yesterday morning with a line in my head, thinking about a new perspective in performing the line.''

He was enjoying the high drama of Measure for Measure with its complicated and difficult ideas.

"It's complicated, difficult and troubling. It's really interesting. I enjoy that.''

Tynan-Moss is joined on stage by Summer Millet, who, until she auditioned for the Pop-up Globe, had had no real Shakespeare experience except in the Sheilah Winn Shakespeare Festival at high school.

The Welsh-born but Whangarei-raised actress is a singer by trade who ended up studying at Toi Whakaari New Zealand Drama School.

She has found using the language of Shakespeare to be similar to that of her work as a lyricist.

"The words, the passion of Shakespeare is brilliant. It's like learning songs, you just don't sing some of them.''

Millett, who plays Ophelia in Hamlet and Mariana in Measure for Measure, admits her audition on Auckland's Pop-up Globe stage was quite intimidating.

"It was terrifying. This big black space seemed impenetrable, but the director was so wonderful, he helps you get to grips with it.

"You're having a conversation with more than one person.''

Millett has played Ophelia for the summer season at Auckland's Globe.

She is really excited about the tour and the challenges of taking it to so many different venues.

"With long seasons, it's quite easy to get complacent but there will not be the space for that. We'll have to be on our toes.''

Gregory still feels the company has a long way to go before it hits the heights of Shakespeare - he did write 37 plays.

"We have big plans for the future. This is the start of the project, not the end of it.''

I saw their MacBeth in Sydney last year, it was fantastic. Great to see it's still touring, hope they come back again!