TiVo and Telecom pair up 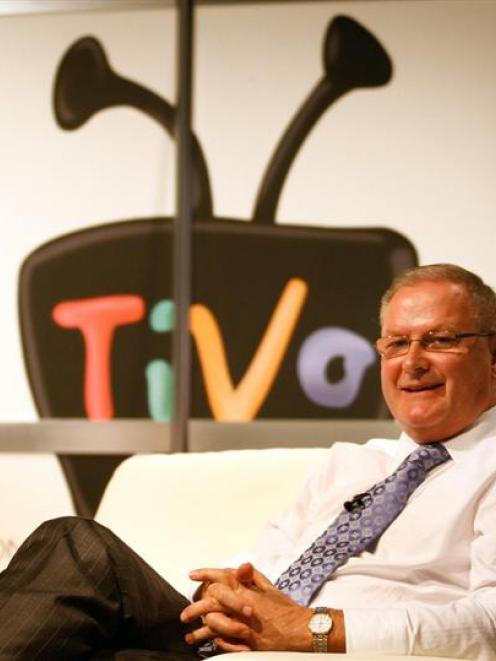 TVNZ chief executive Rick Ellis at the press conference announcing the TiVo launch. Photo by The New Zealand Herald.
The launch of the digital video recorder TiVo has been announced for November but its future is wired in with Telecom broadband.

Corporate backers say the arrival of the digital video recorder (DVR) with broadband capabilities will usher in a new era of television that will allow recording, rewinds of live broadcasts and video on demand.

But customers will pay $899 and will need a Telecom broadband account to get the full package.

But it will also offer extra programming and pay-per-view films and events to those with broadband.

TiVo is similar to the MySky digital recorder and My Freeview, which allows users to pre-record content with pauses on live content and rewinds.

SkyTV announced recently that it was closing down its broadband download website because customers complained it was using up their bandwidth.

TiVo chief executive Robbee Minicola said TV would not take off until telcos offered unlimited broadband capacity for movies, which typically weighed in at a gigabyte each.

But the head of Telecom Retail, Alan Gourdie, said the data downloaded from TiVo would not be included in the monthly cap rates of broadband customers.

Content downloaded to TiVo sets can be shared between network-connected devices, such as PCs, mobile phones, iPods and PlayStation Portables.

Ms Minicola says data delivered at a modest speed of 1.5Mbps (megabits per second) would take only three to five minutes to download the first 10 minutes of programming.

TiVo's exclusive deal with Telecom has removed some doubts about the digital video recorder technology competing in a similar market to MySky.

With free broadband, pay-per-view movies can be charged at a competitive price.

The close relationship between the telco and the TV company was announced earlier this month by TiVo Australasian distributors Hybrid Television Services, at TVNZ's Auckland studios.

Hybrid is one-third owned by TVNZ and two-thirds by the Australian Seven Network.  - John Drinnan and Matt Greenlop.