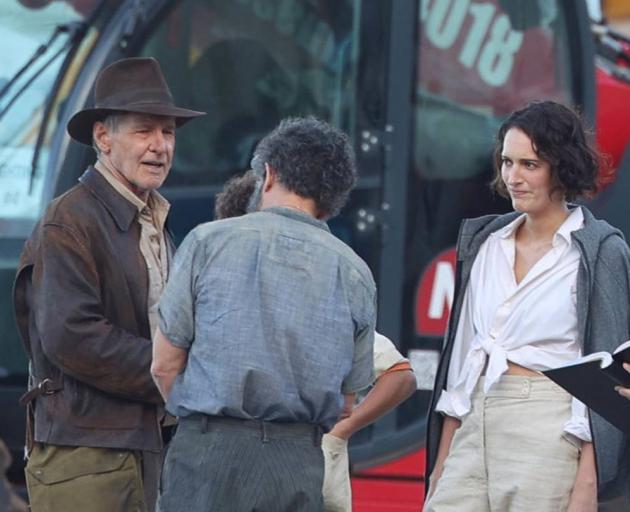 Harrison Ford, Antonio Banderas, and Phoebe Waller-Bridge on set in Sicily. Photo: Getty Images
A crew member has reportedly died on location of the long-awaited Indiana Jones sequel in Morocco.

Camera department pro Nic Cupac was found dead in his hotel room in the city of Fes, Walt Disney Studios confirmed to The New York Post on Thursday.

A rep for the production told the outlet, "Our hearts go out to the family and friends of Nic Cupac, an incredibly talented colleague and member of the film community who will be greatly missed.

"His sudden passing was not production-related. Nic was a grip on 2nd unit."

Cupac's cause of death was not publicly disclosed, but he is thought to have died of natural causes.

The 54-year-old was an industry veteran who also worked on the Star Wars, Harry Potter and Jurassic Park films, recently flying to Morocco to help film Indiana Jones 5.

Over 100 crew members had reportedly gathered in the city to film a major stunt scene. Cupac's grip work involved helping build and maintain the rigging equipment that supports cameras.

The film project appears to have been plagued by problems from the start of filming over the summer.

East London residents revealed in June that the filming on location in their neighbourhood was making life "a living hell" for them. The entire street was blocked off for days and caused major headaches.

Last week, filming was put into jeopardy when Morocco banned flights to and from the UK due to a rise in Covid cases. Harrison Ford, 79, was set to fly into the country just before the travel ban was announced, but it's unclear where he currently is.

Production was also halted for three months after Ford suffered a shoulder injury in June, only returning to set in Italy two weeks ago.

The film has suffered other lengthy delays in production largely due to the Covid-19 pandemic.

It's not clear if Cupac's death will prompt further delays in filming.