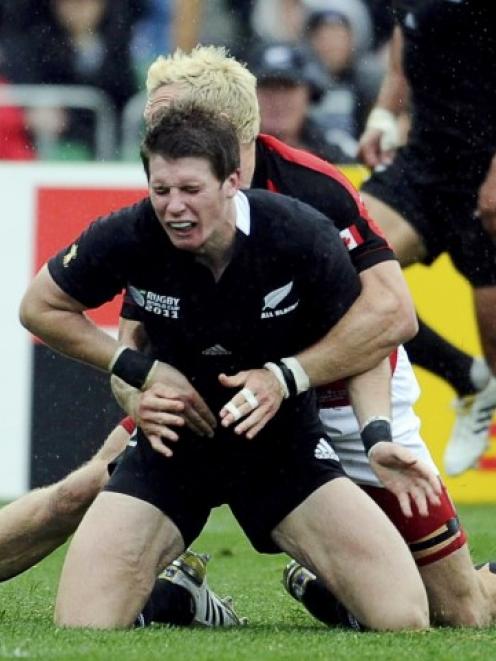 New Zealand's Colin Slade (C) drops the ball as he is tackled by Canada's Phil Mackenzie during their Rugby World Cup Pool A match in Wellington. Photo: REUTERS/Anthony Phelps
New Zealand coach Graham Henry has backed Colin Slade to fill the void left by flyhalf Dan Carter following a solid performance in the All Blacks' 79-15 victory over Canada in their final pool match on Sunday.

A groin injury ruled Carter out of the World Cup earlier in the day and soon after the match, Henry was talking up 23-year-old Slade's prospects of making the role his own for the remainder of the tournament.

"He just needs more football. The more time we can get him out there, the better he's going to be."

The loss of Carter is a worst-case scenario for the hosts, so the pressure was on Slade to see how he could lead the All Blacks from the crucial flyhalf position.

It was an assured, if unspectacular performance from Slade, who ran the ball well and was defensively strong, though he had a shaky start when an attempted clearing kick was charged down in the first minute.

He soon settled down, however, and helped set up a try for winger Zac Guildford with a nice line break five minutes later.

Slade was less successful with his kicking, landing just four of his eight attempts, although swirling wind conditions would not have helped.

A nice cut pass to set Guildford free for another try and a further break early in the second half rounded out a useful day for the Otago Highlanders flyhalf.

"He's obviously got big shoes to fill and I think he ran the game pretty well," stand-in All Blacks captain Andrew Hore said.

"He grew out there and did some pretty special things, so if the other 14 lads out on the field do their jobs then he can do his when we move on to Argentina (the All Blacks' quarter-final opponents)."

Slade is the latest in a long line of flyhalves to be given the opportunity to back-up Carter during Henry's tenure, which reached 100 tests on Sunday, and his performances in the black jersey this year have been underwhelming.

In two starts, against South Africa in the Tri-Nations and Japan during pool play at the World Cup, he committed unforced errors, suffered from inconsistent kicking and appeared to let his head drop when things were not going well.

Pundits have questioned his temperament in the big games and it was telling that during the Japan match, an indifferent Slade was replaced by scrumhalf Piri Weepu.

Weepu has proved himself more than capable at Super Rugby level and in brief appearances off the bench for the All Blacks.

Slade was again replaced by Weepu at flyhalf in the 50th minute against Canada, moved to the wing and was then taken off.

Henry said the number 10 was starting to tighten up and his substitution was simply precautionary.

Slade said he was "pretty happy" with his performance, despite the late notice and lack of training all week.

"As we move forward in the tournament I'm going to be constantly learning," he added.