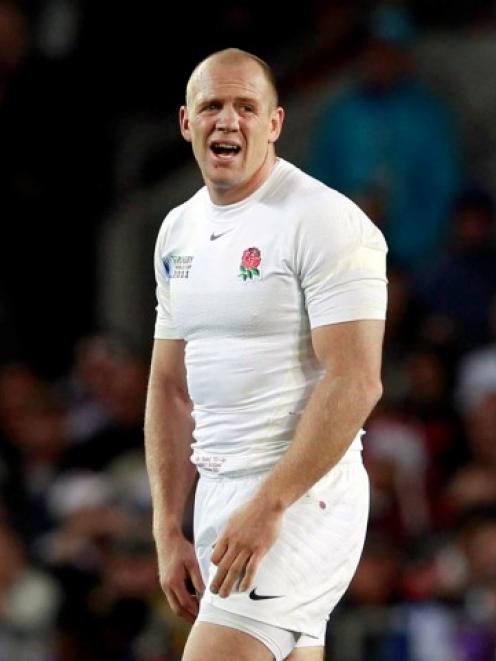 England's Mike Tindall reacts during his team's match against Scotland in Auckland at the weekend. England are one of the quarterfinalists in the 2011 World Cup. Photo: REUTERS/Stefan Wermuth
The intensity level at the Rugby World Cup has been ratcheted up a notch, as the surviving eight teams begin their preparations for the knockout phase, while England and New Zealand have asked the public to 'move on'.

The quarterfinalists had settled their Auckland or Wellington bases, the venues for next weekend's encounters, to take stock of the state of their squads and assess injuries from the final pool matches.

"The games are played at high intensity. Even the ones against the lower ranked teams (in the pools) have been played at huge intensity so injuries will always be a part of it."

The Wallabies' quarterfinal opponents, South Africa, will be sweating over the fitness of first-choice wingers JP Pietersen and Bryan Habana, while England have similar concerns over flyhalf Jonny Wilkinson and centre Mike Tindall.

Martin Johnson's side, however, will definitely be without the attacking thrust of Delon Armitage for their match against France at Eden Park.

The utility back was banned for one game after he was found guilty of a dangerous high tackle on Scotland's Chris Paterson on Saturday, though Johnson said he still had plenty of options in Mark Cueto and Matt Banahan.

Cueto, however, momentarily switched his focus to the public and English press, telling the media to "move on" after they continued to report details of the England team's off-field antics in the deep south of New Zealand.

"There are two things that have happened but they are in the papers ever day... that's down to you guys," Cueto told reporters in Auckland. "Move on and start writing about other things; it was three weeks ago."

New Zealand flyhalf Daniel Carter faced the media on Monday for the first time since he suffered a groin tear on Saturday that ruled him out of the World Cup.

The 29-year-old had been considered one of the pivotal members in an All Black side hoping to end a 24-year World Cup drought and newspapers, television and talk radio stations have spent the last 48 hours poring over the injury and its ramifications.

Wellington's Dominion Post newspaper's front page lead story on Monday was headlined "Can we do it without Dan?", but Carter himself asked the country to stop worrying about whether the All Blacks could win the World Cup and just support them.

"It is pretty gut-wrenching and really disappointing but I have to get over it and think positively and help the guys in any way I can," he told reporters at a packed media conference in Auckland.

"It's important that the country get over it and move on and continues to support the All Black side. Now we're in the playoffs, the support is even more important."

Tournament organisers began their final push for ticket sales with the news they were less than NZ$6.5 million away from achieving their target of NZ$268.5 million.

Should they achieve that figure, organisers will make a $39 million loss, which is being underwritten by the government and New Zealand Rugby Union.

Almost 1.1 million fans had attended the 40 pool matches, organisers said, with four of the final eight matches over the weekend sold out.

"This is an excellent place to be with eight major matches of the tournament yet to be completed," organisers chief executive Martin Snedden said.

"I have no doubt we will reach our goal despite the major challenges we have faced, both with the tragic Christchurch earthquake and the difficult economic climate."