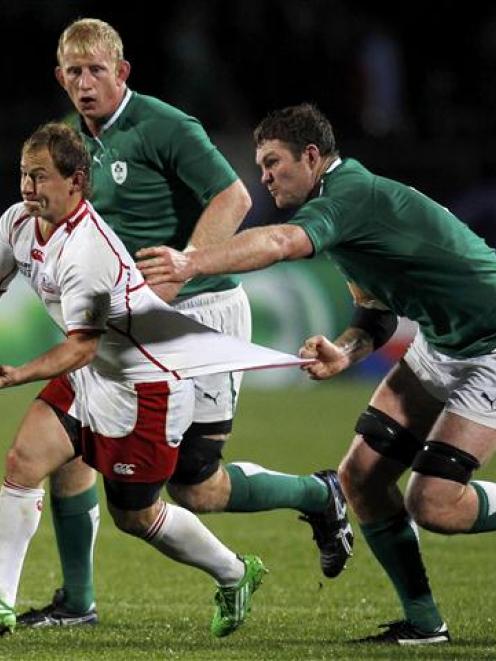 Maintaining the momentum from their upset victory over Australia last week, the Irish secured a bonus point with three tries in three minutes at the end of the second half against a Russian team playing its third game in 11 days.

Centre Earls crossed for his second try eight minutes into the second half to help ensure Ireland would go into their final Pool C game against Italy next weekend with three wins from three games.

Experienced flyhalf O'Gara was outstanding for Ireland, kicking seven from eight with the boot and marshaling a backline which had been overhauled from last week's Eden Park triumph.

"A few guys got an opportunity this week to back up the performances of the weekend," said Ireland captain Leo Cullen. "It was important to continue the momentum. We will take the win and move on."

Russia, who have now lost all three matches on their World Cup debut, battled manfully to stem the green tide and got reward for their efforts with second half tries from fullback Vasily Artemyev and winger Denis Simplikevich.

"I want to thank all my team mates and management for their efforts they have put in," said Russia fullback Artemyev, who represented Ireland at schoolboy level.

"It is good to get the games of this level as the intensity we get here is nothing like we have faced before."

O'Gara had already converted a penalty when his opposite number Konstantin Rachkov was sin-binned in the eighth minute for a deliberate knock on.

Ireland took full advantage of their numerical superiority and winger McFadden slid across the wet turf to gather O'Gara's cross-kick in the 10th minute before flanker Sean O'Brien crashed through the defence for a second try three minutes later.

The Irish attack then stalled and the spirited Russians carved out a few chances of their own but the three-try blitz at the end of the half ended the match as a contest.

New Zealand-born scrumhalf Isaac Boss inched over from close range for the first, livewire winger Andrew Trimble's break put Earls in for the second and Trimble added the third himself on the stroke of halftime.

Earls carved his way through the defence to cross for his second eight minutes into the second half and when O'Gara kicked his fifth conversion, the Irish were leading 43-0.

The Russians finally got some reward for their brave performance two minutes later when fullback Vasily Artemyev scythed through the Irish defence to touch down.

The noisy Russian element in the largely green-clad crowd of 25,000 were back on their feet nine minutes later when winger Denis Simplikevich bulldozed his way across the try line in the corner.

The fightback was short-lived, however, and Ireland hammered home their superiority with tries in the last 15 minutes from Rob Kearney, replacement flanker Shane Jennings and prop Tony Buckley.