Ireland laugh it up before serious job against Wales 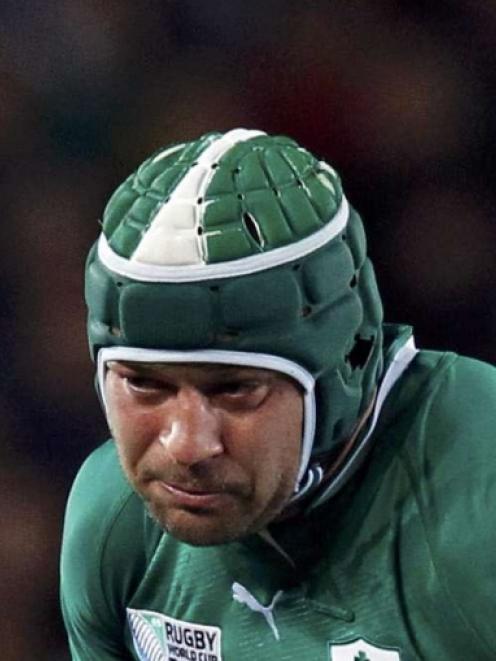 Rory Best
Ireland's players and management insisted their minds were fully focused on their rugby World Cup quarter-final clash against Wales, but did their best to dash that impression as they joked with reporters and spoke of intra-team man-crushes.

Rory Best's recovery from a shoulder injury contributed to the air of jovial calm, the hooker's availability for tomorrow's match at Wellington Regional Stadium a welcome boost for the rampaging Irish pack.

"Rory has come up great. We obviously had some precautions in place ready to support (his possible absence), but he's in tip-top shape," defence coach Les Kiss told reporters. "He's fine to start."

Best had been in danger of missing the knockout clash after he suffered the injury in Ireland's 36-6 victory over Italy in Dunedin last Sunday.

Number eight Jamie Heaslip suggested none were more pleased to have the 29-year-old fit and firing than prop Mike Ross.

"I think Rossy's (Mike Ross) got a man-crush on him up in the front row," quipped Heaslip, with the tighthead prop sitting next to him at the team's media conference.

Heaslip went on from there. After the prop was asked about the support the team had received in New Zealand, the number eight retorted: "You're saying Ross has an individual fan base?"

The 27-year old also laughed when another journalist asked as to how much the prize pool was now worth for the amount of times the team said "ding-dong battle" in their media conferences.

"It's 'ding dong battle'. (Coach) 'Declan (Kidney) for president' and 'miaow'. So I hope you get all those in there," added Heaslip, detailing the set phrases the team had agreed to try to work into their answers at media events.

Heaslip may have been in a jocular mood, but he, Ross and Kiss all said they were well aware of the challenge they faced from a Wales side that had impressed with their high-tempo style of game and attack-minded backline.

"We are really taking this in a serious manner," said Kiss, a former Australian rugby league international. "We may have been a little bit jovial up here, but this is serious and Wales have a lot at stake as well.

"We have played each other so much in recent times so it is reasonable to say it is 50-50 (on who would win).

"There will be some critical pressure moments in the match and ... we need to be there or there abouts in the last 20 minutes and (I think) that will sort it out.

"But as I have said before, it will be a ding-dong battle."