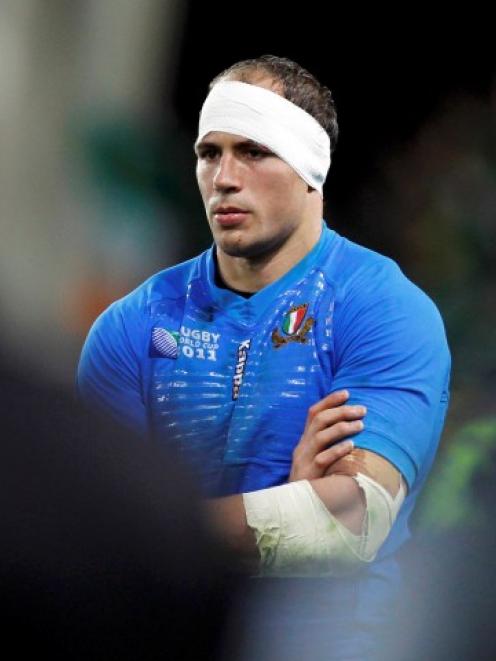 Italy captain Sergio Parisse stands on the field after his team lost their Rugby World Cup Pool C match against Ireland at Otago Stadium in Dunedin. Photo: REUTERS/Brandon Malone
Italy coach Nick Mallett had no excuses after his team were beaten by Ireland in their final pool match on Sunday, and backed the Irish to go all the way to final.

"They've got a team who can knock over anyone in that side of the draw in the quarters and the semis. I don't think any team can be confident against them," Mallett said after the 36-6 defeat by Ireland. "Where is their weakness?"

After a tense first half which they edged 9-6, Ireland ran away with the game as two tries for Keith Earls and one for Brian O'Driscoll set up the win that sent them through top of Group C.

Next up is a quarterfinal against Wales and should they win that to reach the semifinals for the first time, only familiar foes England or France will stand in their way.

"They were outstanding. We had to play really well to stay in touch but then their backs began to control the game incredibly well," said Mallett after his final game in charge of the Azzurri ended in another failure to reach the quarterfinals.

Mallett, who is reluctantly standing down after four years in charge, said the injury loss of key prop Martin Castrogiovanni late in the first half had a major impact on the match, though he accepted that his side would have struggled to win even had he stayed on.

"He's someone we desperately missed," he said. "After he went off we lost four scrum penalties.

"Our first-choice front row and scrum was as good as the Irish and had that stayed together it would have helped our cause - though I should say it probably wouldn't have helped us win.

"I was very proud of the team for that first 40 minutes but after that we were outplayed and I'm disappointed that it ended as such a heavy defeat."

Ireland coach Declan Kidney, as ever, refused to get carried away after his charges became the first Irish team to finish top of a World Cup pool.

"We've got ourselves into a place where we're playing Wales for a semifinal place and that's all you could hope for at this stage," he said.

"After playing three games in the wet being indoors allowed us to play a bit more like we do in training.

"It took a while to break them down but we made them work hard and then took our chances."

Captain O'Driscoll, who scored the opening try eight minutes into the second half, said: "We knew it was going to take more than a half to grind them down, we had to be patient.

"We kept the scoreboard ticking over then we carved out some good chances and were clinical in how we took them.

"We didn't bring in the results we hoped for before the tournament but we didn't panic at any stage. We have a big belief in ourselves and so far we've delivered."