Key: Snowden "may well be right" 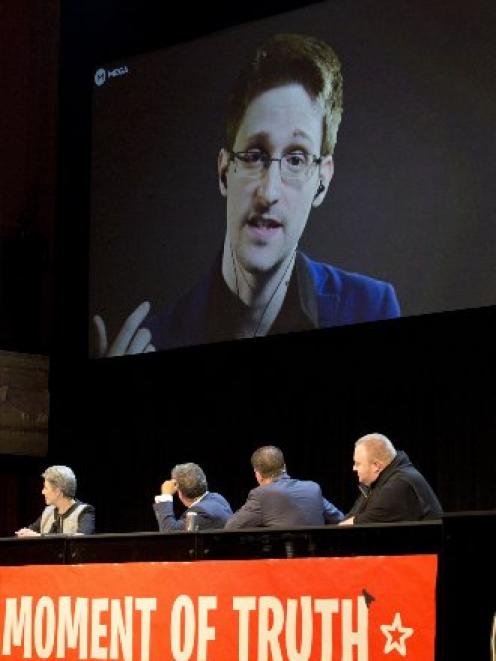 However, Mr Key maintains that information will not have been gathered under any Government Communications Security Bureau (GCSB) mass surveillance programme as the agency doesn't have that capability.

During Monday night's Kim Dotcom-sponsored ''Moment of Truth" Snowden claimed that as an NSA (National Security Agency) analyst stationed in Hawaii some years ago, he regularly came across New Zealanders' data held in the agency's XKeyscore system.

Snowden claimed at least some of that information was gathered via mass surveillance programmes the GCSB was involved with.

Speaking on Radio New Zealand this morning, Mr Key said there were a number of devices and programmes used by the GCSB but he would not go into details.

"However, what I can say in terms of those kinds of Five Eyes databases… yes New Zealand will contribute some information, but not mass wholesale surveillance as people might say." Addressing Snowden's claims, he said: "I think the point he was making was in that shared database he said 'I regularly came across information about New Zealanders' -- that may well be right".

"That's not true, we're not collecting wholesale information… We don't have the capability for mass surveillance", Mr Key said.

Information about New Zealanders supplied by the GCSB to the Five Eyes intelligence-sharing network was limited to that gathered under a warrant.

"You could not gather information about New Zealanders without a warrant," Mr Key said.

"But one thing I can say , we don't control what other agencies and other people collect… so it's true there will be New Zealanders there and Americans may have gathered information across a whole lot of reasons legitimately that they gather for hundreds and hundreds of countries.

"But what is absolutely also true is we can't circumvent our law, so we don't use a foreign agency to go and do something." That meant New Zealand agencies could not access information about New Zealanders gathered by foreign agencies without a warrant.

Mr Key's comments came as Inspector-General of Intelligence and Security Cheryl Gwyn issued a statement regarding her ongoing review of whether the GCSB was acting within its restrictions.

"I can advise that I have not identified any indiscriminate interception of New Zealanders' data in my work to date," she said.

"I will continue to monitor these issues."

But US journalist Glenn Greenwald who has worked extensively with Snowden to expose alleged mass surveillance by the NSA told the Herald today, "I don't know what she's seen or hasn't seen but she should take a look at the evidence we've produced as part of our reporting".

"That made very clear that the project that the NSA and GCSB were working on and proceeded to take steps to implement was a project of mass surveillance -- was she aware of Project Speargun?"

Greenwald said there was "a history around the world when we've done reporting of the people who are responsible for overseeing these agencies being kept in the dark." "I don't disbelieve her that she's never seen it, but that just means she hasn't seen the evidence."

Mr Key has said their information is incomplete and refers to a wide-ranging cyber security project that was scaled back amid concerns it would be perceived as a mass surveillance tool.

Greenwald has said he will soon produce reports detailing GCSB surveillance of friendly countries on behalf of the United States.

The reasons for doing so included ensuring the security of "sporting teams going to a particular location that might be at risk" and keeping tabs on "foreign fighters".

"Over successive governments I think I've got a pretty good sense of where and why that intelligence has been gathered and I'm comfortable that it's been directed in the right place." Asked whether he was preparing for a backlash similar to that when it emerged last year that Australia had spied on Indonesian leaders, Mr Key said he wasn't.

''Most countries would expect that for a variety of reasons, intelligence is gathered."