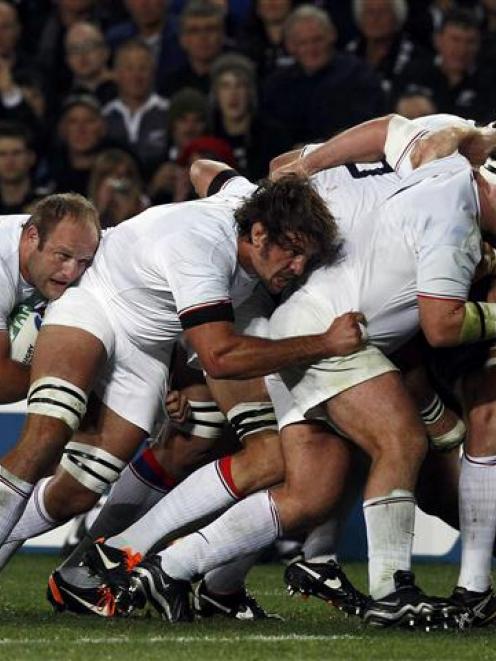 France players contest a scrum during their Rugby World Cup Pool A match against New Zealand. REUTERS/Jacky Naegelen
France coach Marc Lievremont bemoaned his side's basic errors as they were overrun by the All Blacks at Eden Park but the enigmatic coach remained confident his side were improving.

After a strong first nine minutes the French defence went AWOL as the All Blacks ran in three tries in 11 minutes to set the platform for a 37-17 victory that meant they won the rugby World Cup Pool A with a game to spare.

"We made a good first part of the match but they didn't panic and they took the first opportunity to score and that was very tough for us," Lievremont, told reporters.

"We know how talented New Zealanders are and they are very good at sidestepping us and against them we have to be errorless and we did not manage to do this."

France had been accused by local media of fielding a team of reserve players in order to avoid winning the match and also the pool so as to skip the tougher half of the knockout draw.

Lievremont rejected the accusations and said he was pleased with the bright start his team made where they threatened the All Black line and starved the home side of possession.

"I think I have lined up the best possible team. I do believe there has been a development, a progression, I'm quite positive about it."

"We were intense and dynamic, however we suffered from a number of very basic errors in defence."

The All Blacks rebounded from the tough start and, with their first attack, number eight Adam Thomson scored a try in the corner in the 10th minute with winger Cory Jane (17th minute) and fullback Israel Dagg (21st) following to build a 19-0 lead.

"We did a good first part of the match but they didn't panic and they took the first opportunity to score and that was very tough for us," Lievremont said.

Lievremont praised the performance of Morgan Parra, a controversial selection at flyhalf, who had a quiet game and suffered in defence as the All Blacks attacked down the middle with constant success.

"He has played well. He has been very brave. I'm quite satisfied with his match and I don't believe we can blame him for the defeat," said the coach, who is stepping down after the tournament.

The French pack had been expected to cause numerous problems for their opponents but captain and flanker Thierry Dusautoirt admitted they were bullied up front during scrums by their All Black counterparts and suffered in the loose.

"They attacked us between the ruck and number 10 and they found spaces," the despondent-looking captain told reporters.

"On those kind of errors they take their opportunities and are very efficient."

France, who beat Japan and Canada in their opening Pool A matches, can qualify for the quarter-finals with a win over Tonga next Saturday in Wellington but when asked if his team could become world champions Lievremont reacted angrily.

"You are really, really annoying me with that question," he said to one journalist. "I just said we might not qualify, is that enough for you?"