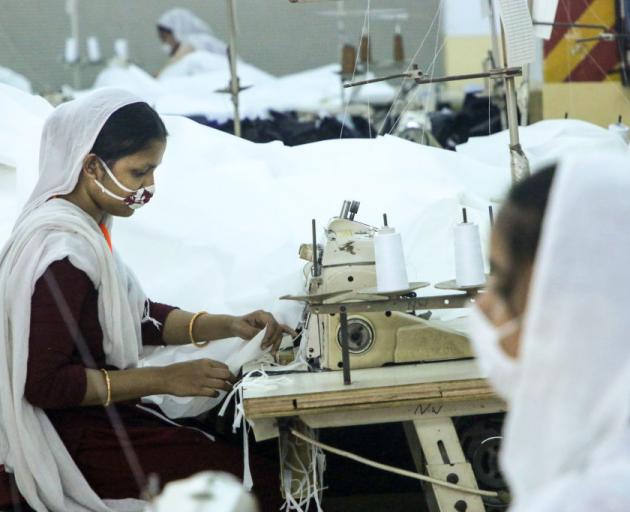 Bangladesh relies on the garment industry for more than 80% of its exports, with some 4000 factories employing about 4 million people, mostly women. Photo: Getty Images
Western clothing brands that agreed not to cancel orders due to the coronavirus epidemic are demanding price cuts of up to 50%, Bangladeshi manufacturers say, heaping economic pain on a country already reeling from the crisis.

Millions of Bangladeshi households depend on the garment sector, which has been hit hard by the epidemic.

Exports fell by 84% in the first half of April as $US3 billion ($NZ4.9 billion) worth of orders were cancelled or suspended, according to factory owners.

"We are still observing their departure from original contract terms... which includes renegotiating prices as low as 50% of the original deal," said Rubana Huq, president of the Bangladesh Garment Manufacturers and Exporters Association.

Bangladesh, which ranks behind only China as a supplier of clothes to Western countries, relies on the garment industry for more than 80% of its exports, with some 4000 factories employing about 4 million people, mostly women.

Huq said many had yet to say when they would pay or take delivery, accusing them of "following a strategy to buy time".

"We are not aware of any other brand except one that has declared its plan in detail regarding delivery and payments centrally in black and white," said Huq, citing Swedish fashion giant H&M, the biggest buyer of garments from Bangladesh.

"(The) rest have all been conditional, mostly based on deferred payments, discounts and deferred deliveries."

Kalpona Akter, a labour activist, warned that workers would bear the brunt of reduced or renegotiated orders.

"We will be able to see the impact by next month, when workers will have to be paid their Eid bonuses and salaries," she said.

With Western economies struggling due to the crisis and retailers in many countries closed, brands have begun cancelling orders, though some have pledged to take delivery of garments already made or in production.

A government official said cancelling or renegotiating orders was unjust and authorities were addressing the issue through diplomatic negotiations.

"Our factory owners have spent a lot of money to be compliant and safe. It's an injustice to still not get good prices," Md Jafaruddin, secretary of the Ministry of Commerce, told the Thomson Reuters Foundation.

The government announced a $US588 million package to help the crucial export sector pay its workers last month.

Labour leaders say that this is not enough and that buyers need to come forward to support workers.

Hundreds of workers took to the streets last week, defying a government lockdown to protest the non-payment of wages, according to police.

Brands that have their clothes made in Bangladesh, Thailand, Fiji, Vietnam etc needn't worry. I'm sure demand for their product will remain strong.
China on the other hand, well find some buyer reluctance for a while to come.