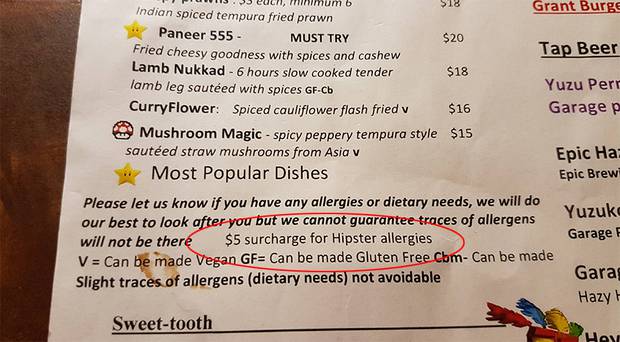 Satya Chai Lounge's menu jokingly shows a $5 surcharge for Hipster allergies. Photo: Reddit
An Auckland restaurant has divided opinion after it jokingly introduced a $5 "hipster allergies" surcharge to its menu.

Images of popular Indian restaurant Satya Chai Lounge's menu were posted online, highlighting what items on the menu are suitable for those with specified dietary needs.

But alongside the vegan and gluten-free options is a $5 surcharge for hipster allergies.

The menu reads: "Please let us know if you have any allergies or dietary needs, we will do our best to look after you, but we cannot guarantee traces of allergens will not be there."

"$5 surcharge for Hipster allergies. V = Can be made Vegan. GF = can be made Gluten Free."

The menu was posted online with the caption: "I approve of the $5 Hipster Allergies surcharge". 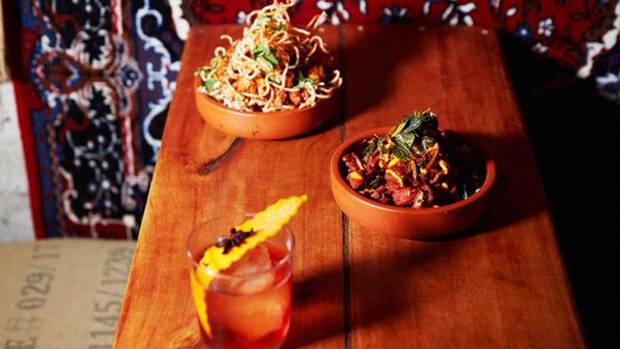 While some found humour in the surcharge, others have labelled the restaurant "ignorant".

"So someone with coeliac disease had to pay more because these ignorant t**ts think it's a 'hipster allergy?'," one person wrote.

Another reader, who is soy intolerant, says it's already hard enough to eat out without having issues, and that the restaurant is just poking fun at a serious matter.

"Yeah, I'm allergic to dairy and last week my soy intolerance had me locked in the bathroom of a bar completely sober - they're gonna call it hipster and make fun of the fact that I physically can't stomach the stuff?!"

However, others have sided with the restaurant, taking aim at those who being fussy because of their lifestyle choices rather than having any genuine medical dietary requirements. 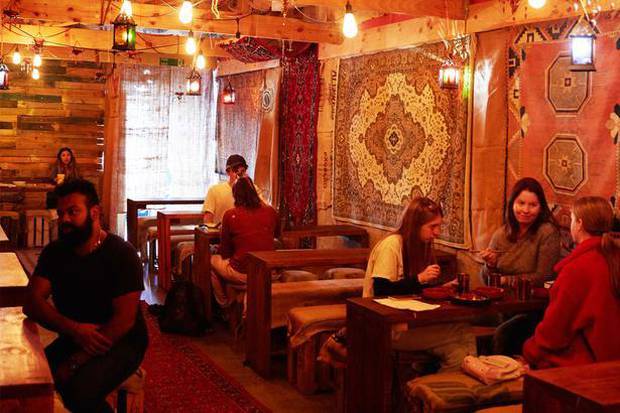 "I will just note, I don't think anyone with legit allergies should be charged or made to feel stink, but after having seen some over the top hipsteresque demands in hospo, I can see why they thought this was a funny way to pre-emptively nip it in the bud," one wrote.

Another said: "Fair enough to charge for alternative ingredients."

Satya Chai Lounge owner Samrudh Akuthota has since responded to the criticism, telling the Herald the restaurant always bends over backwards for its customers' dietary requirements.

He explained the $5 surcharge was a "joke" and that the message is to simply tell staff whether your dietary requirements are serious so they can take all measures needed to keep customers safe. 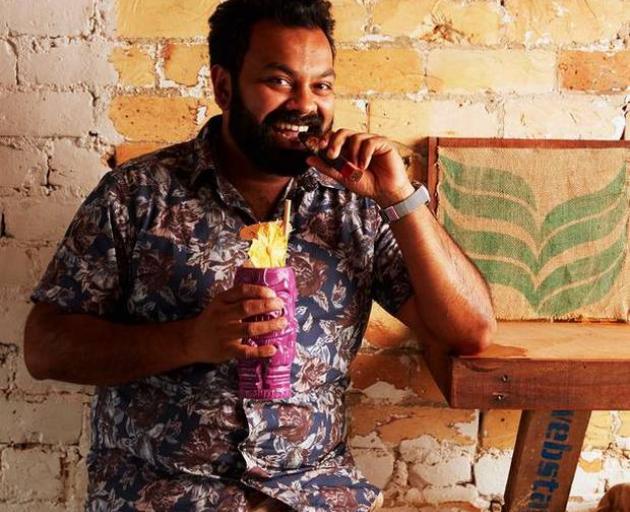 Owner Sammy Akuthota explained that the $5 surcharge was a joke borne out of frustration. Photo: NZ Herald

"The food we do is super traditional. We want to cater to authenticity. We will bend over backwards to look after people who have serious dietary requirements. We've cleaned the whole kitchen up and make sure they get looked after and don't die," Samrudh told the Herald.

"One of our struggles is gluten-free. Over 60 per cent of our menu can be made vegan, which is one of the trendiest things now, we can cater to that. We can't always cater to gluten-free.

"The frustrating thing is we have people say 'we're coeliac, wheat will kill me' but we offer them a gluten-free beer option and they say 'no, beer doesn't count'. They take the piss.

"The hipster allergy was really put on there as a joke. We've never charged that and we never will. It's more a case of saying if you're going to be hipster and trendy by being vegan or gluten-free please tell us how serious it is. If it is going to be life-threatening, we will do our best to look after you.

Samrudh explained when a special dietary request comes through his staff work extra hard to clean down prep stations, and those who don't have legitimate dietary requirements make it challenging.

He says a lot of people are too politically correct nowadays and wants customers to be able to have a laugh by spotting the jokes on the menu as well as enjoy a meal they can safely eat.

"Chefs work so hard to make good food for them. They clean the whole station down so there are no traces of allergens.

"We want people to have a good time. There's been times I've yelled out across the room 'please don't eat that' because they're about to put a crunchy piece of fried chicken in their mouth but they've asked me for gluten-free, then they turn around and say 'no it's ok it's not going to kill me. This is where it stems from.

"People are too PC and uptight. I just want people to come to my place and have a good time and laugh at a few jokes on the menu."

For years, the Satya restaurants have given free meals to families at Christmas time who have had a rough year, as well as stranded tourists, homeless people and regular customers who make donations.

The idea started in 2011, where Swamy Akuthota and his wife Padmaja offered free meals on Christmas Day, which has become an annual event for up to 1800 people.

"People who have a tough year and feel shy, we would love to have them along."

Satya Chai Lounge is renowned as one of the best restaurants in Auckland, with the establishment making it into Cuisine's Top 100 restaurants for 2018.

Too PC or uptight.

You're either running a restaurant or engineering Society. Which is it?