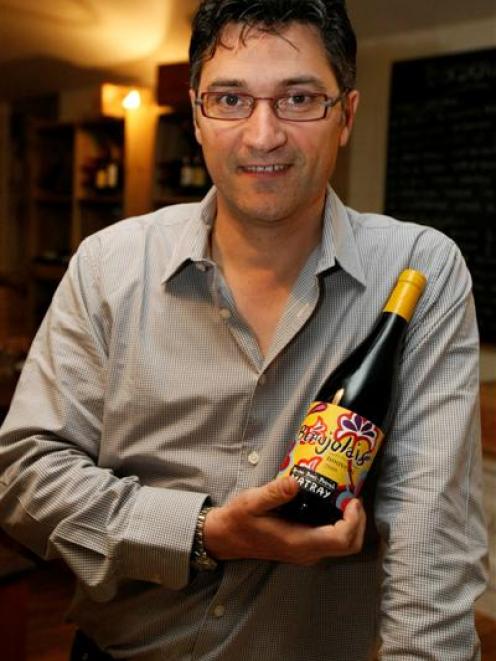 Jean-Christophe Poizat from Mason Vauron with a bottle of wine from the world famous Beaujolais region in France. Photo by NZPA.
New Zealand wine lovers today again beat the rest of the world to taste the 2009 vintage of a much-publicised French red wine.

Beaujolais Nouveau cannot be opened before the third Thursday of November and the time zones meant New Zealanders got the privilege ahead of everyone else.

Jean-Christophe Poizat, co-proprietor of Auckland-based importer and distributor Maison Vauron, uncorked a bottle just after the stroke of midnight and gave it his mark of approval.

"It's typical Beaujolais Nouveau so it's got a wonderful crushed raspberries and strawberries on the nose," he said.

"Then when you put the wine in the mouth, you get a big explosion. It's very round, very juicy, and has wonderful freshness."

Mr Poizat, who comes from a family of wine merchants in the Beaujolais region, near Lyon in south-east France, said his company had distributed cases of the 2009 vintage as far south as Dunedin.

While there had always been people in this country aware of Beaujolais Nouveau Day, New Zealanders began embracing it in significant numbers from about the mid-1990s.

In Beaujolais itself, the day was the start of celebrations that would last through to the weekend, Mr Poizat said.

"They say there are three rivers in Lyon -- the Rhone, the Saone and Beaujolais." Unlike the great wines, Beaujolais Nouveau is not intended to be stored in the cellar for maturing, but is meant to be drunk young.

The wine's profile began to rise with a race started in the early 1970s when a British newspaper challenged its readers to be the first to bring a bottle of Beaujolais Nouveau back to Britain.

The race took off and similar events were held elsewhere.

Because of distance, importers in New Zealand are able to have access to the wine early, but have to sign an undertaking that it won't be opened ahead of schedule.