More 2500 Sydneysiders have flocked to a New Zealand culinary adventure in two weeks but even after its instant success, the restaurant doors will close on Sunday.

Tourism body Positively Wellington took over an empty restaurant site in the heart of Kings Cross and in three days created a fully-functioning licensed eaterie and bar to showcase what the windy capital is really made of.

Named WLG - the airline acronym for Wellington - it's believed to be the first promotion of its kind.

It's called a "pop-up" restaurant because it was created quickly and will be dismantled just as fast. The promotion was for two weeks.

The Wellingtonians hauled 28kg of whitebait, 188kg of venison, 44kg of clams, 200 cases of wine and 112kg of chocolate across the ditch for the initiative.

Even contemporary Kiwiana interior decorations were flown in.

The site was once iconic eaterie Bayswater Brasserie, in the heart of Kings Cross where competition for customers is the fiercest in Sydney. Buzzing WLG has been packed to the rafters every night.

The wooden interior and dim lighting echoes The Matterhorn in Wellington. New Zealand produce, chocolate and wines are displayed throughout.

Diners buy three courses for $29, and drinks are extra.

Punishing nightwork in the food industry was taking its toll towards the end with dark shadows under Monaghan's eyes.

"I have a new respect for restaurateurs, I don't know how they do it night after night," he said.

Sarah Meikle, marketing general manager at Positively Wellington Tourism, said it was a monumental logistical feat to arrange for everything from the chefs to the wines to be brought over to Sydney.

"But it really was the only way that we could accurately paint a picture of what dining and being in Wellington is like -- short of flying everyone over there!"

Apart from 11 baristas and wait staff, four chefs were flown over to cook individual menus for several days each.

Rex Morgan, of Boulcott Street Bistro will be the last chef in residence until WLG takes off back to Wellington. 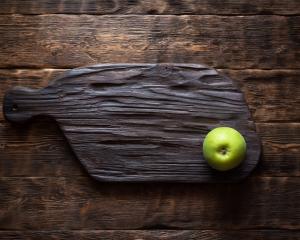