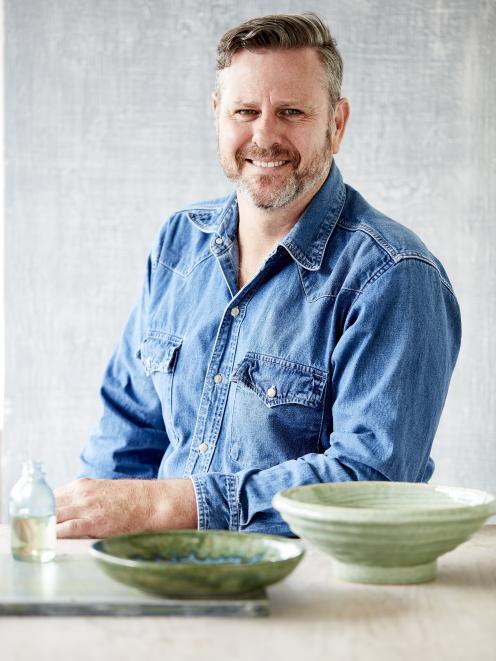 PHOTOS: SUPPLIED
Ross Dobson has been enthralled by Chinese food since he was a young boy growing up in the Sydney suburbs.

He did his first Chinese cooking course aged 14 after being inspired by the food of a childhood friend who had immigrated from Hong Kong. His family shared their food and recipes with Dobson and his family.

Dobson, an author and restaurateur, even wrote his first cookbook on the cuisine — Chinatown explores the flavours of Chinese ingredients.

"Like a tapestry, the cuisine of each region can be linked by a thread or two. Yet, each region will have a distinctive and unique combination of ingredients and cooking techniques. Some differences are subtle. Some not so."

In his latest book, Chinese Food Made Easy, he takes favourite recipes from each of China’s diverse culinary regions and simplifies them for the home cook.

"Regardless of where you are, dishes all over China are often given seemingly incongruous names. Ants climbing tree or lions head meatballs are intriguing names for dishes that are delicious nonetheless." 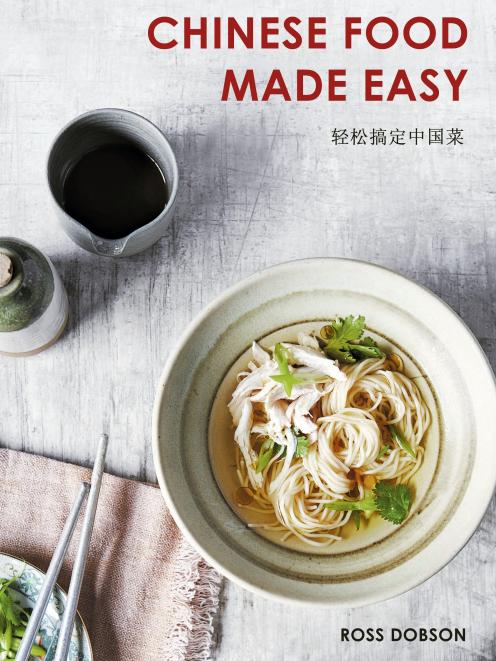 THE BOOK: Chinese Food Made Easy, by Ross Dobson, published by Allen & Unwin, RRP$45
He includes helpful tips on key ingredients to have in the pantry as well as step-by-step guides to blanching greens, cutting a whole chicken Chinese style and peeling prawns.

There is also a "six ways with" for common ingredients such as hoi sin sauce, sesame oil and Chinese broccoli.

Dobson finishes the book with a handy menu planner with suggestions on how to put together a Chinese feast. 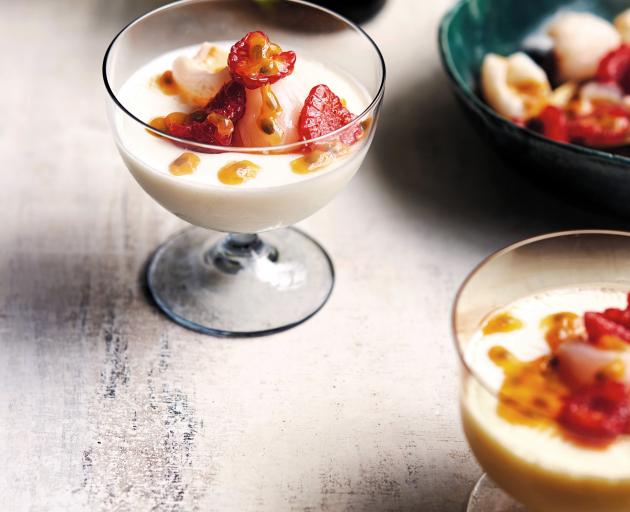 Almond lake pudding is sometimes cut into cubes or triangles to serve. This is a slightly creamier version, using less gelatine and served in individual glasses where it really does resemble an almond lake!

Put the gelatine sheets in a bowl and cover with cold water. Leave for 7-8 minutes until the gelatine is very soft. Drain the sheets well and set aside.

Combine the milk and sugar in a small saucepan over medium heat. Cook for a few minutes until the milk is just warm to the touch. Stir through 1 sheet of gelatine at a time until it has dissolved in the warm milk. Repeat until all the gelatine has been incorporated into the milk. Stir in the almond extract.

Pour into 8 individual serving glasses. Refrigerate for 6 hours or overnight — until firm but still a bit wobbly.

Arrange the fruit in a bowl and serve on the side to spoon over the puddings. 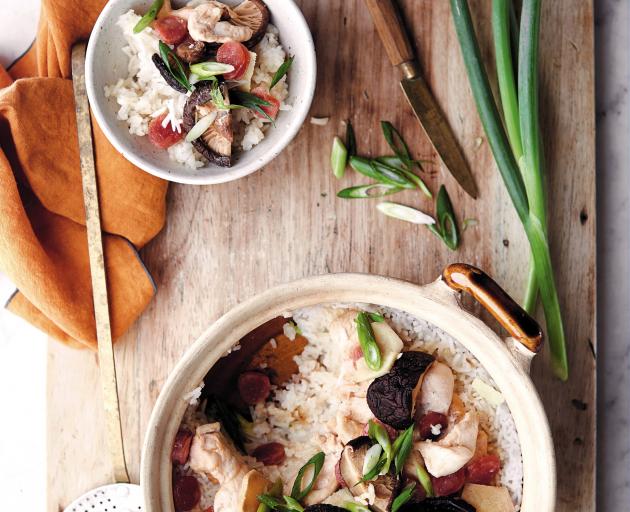 Clay pot cooking is convenient and produces very tasty results. All the flavours are trapped inside the pot, ready to be released when the lid is lifted at the dining table.

Combine the chicken and oyster sauce in a bowl. Cover and set aside for 30 minutes.

Meanwhile, put the mushrooms in a heatproof bowl. Pour over enough boiling water to cover and leave for 30 minutes until the mushrooms are soft. Drain and reserve 120ml of the soaking liquid.

Trim off the stems and discard. Cut each cap into quarters and set aside.

Wash the rice in several changes of cold water until the water runs clear. Drain well and put the rice in a 20cm clay pot or saucepan. Add 600ml cold water and place over high heat. When the water boils and forms bubbling holes in the rice, reduce the heat to low and cover. Cook for 10 minutes, until most of the water has evaporated.

Scatter the chicken and the marinade over the rice. Put the mushrooms and sausage on top of the chicken, then scatter with the spring onions and ginger. Cover and cook for 10 minutes until the chicken is cooked through. 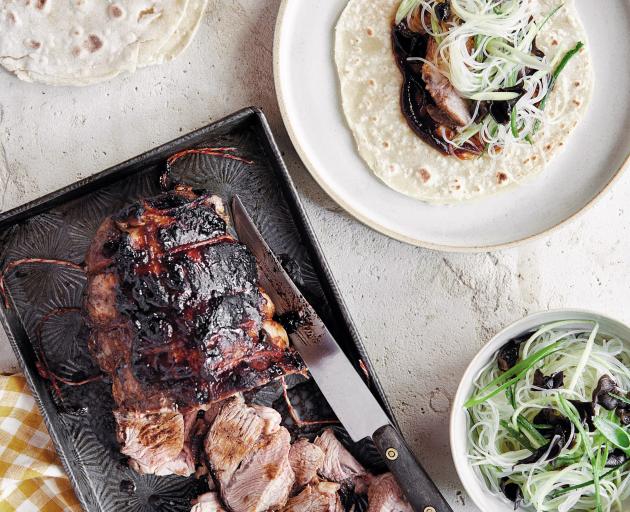 Lamb is commonly used in the north of China in stir-fries and dumplings and often spiked with cumin, a spice we don’t typically associate with Chinese food. Here, the lamb is slow cooked, rendering it fork tender so it can be shredded and wrapped in warm pancakes.

Preheat the oven to 180degC.

Combine 1 teaspoon of sesame oil and 1 tablespoon of hoi sin sauce in a small bowl. Rub all over the lamb.

Transfer the lamb to a snug fitting baking tray and pour 125ml water into the tray. Cook for 1½ hours until the meat is dark golden. Remove to a plate and cover with foil for 30 minutes. Finely slice the lamb and transfer to a serving plate.

Put the fungus in a heatproof bowl. Add boiling water to cover and leave for 15 minutes. Drain well and roughly chop.

Put the noodles in a heatproof bowl.

Add boiling water to cover and leaves for 10 minutes until the noodles are soft. Rinse under cold water and drain well.

Combine the fungus and noodles in a bowl. Add the remaining sesame oil, cucumbers and spring onions and toss to combine. Transfer to a serving bowl or plate.

Spread a small amount of the remaining hoi sin sauce on a pancake. Top with some lamb and the noodle salad and fold.

Ready-made Peking pancakes are sold in some Asian food stores but they are very easy to make at home. Two pancakes sandwich a thin layer of sesame oil. When gently pan-fried, the pancakes are golden on one side and softly steamed on the other. The perfect savoury pancake!

300g plain flour, plus extra for

Put the flour in a food processor. With the motor running, add 180ml boiling water, plus a little extra if needed, until it forms into a ball.

Tip the dough on to a lightly floured work surface and briefly knead to form a smooth ball. Cover with a clean cloth and set aside for 30 minutes.

Cut the dough in half. Lightly flour a work surface and roll one portion of dough until it is 2-3mm thick. Cut out circles using a 7cm round cutter to make at least 12 circles. Repeat with the other portion of the dough to make 24 circles in total.

Lightly brush one side of half the circles with sesame oil and put another one on top, gently pressing them together to seal. Roll these circles on a lightly floured surface until they are about 15cm across and very thin.

Heat a large non-stick frying pan over medium-high heat. Working in batches, cook the pancakes for about 1 minute each side until golden and steam puffs out from the centre. Transfer to a plate and cover to keep warm.

These can be made a day in advance and kept covered in the fridge. To reheat, wrap in foil and cook in a 180degC oven for 10 minutes. 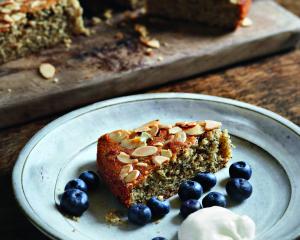 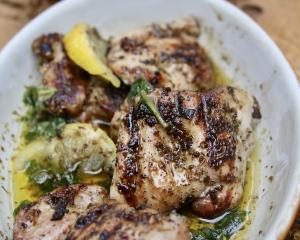 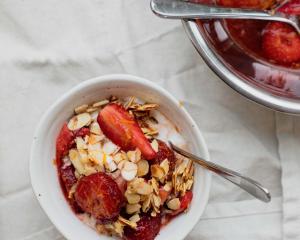 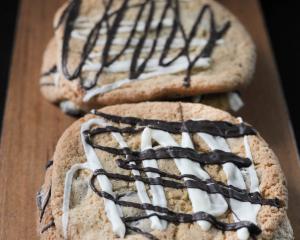 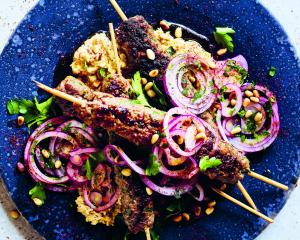 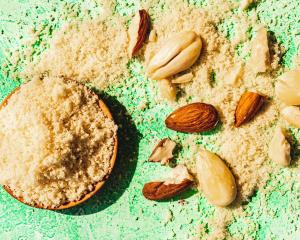 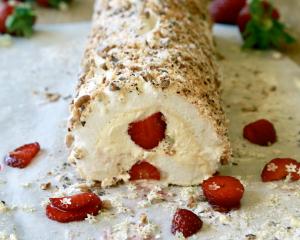 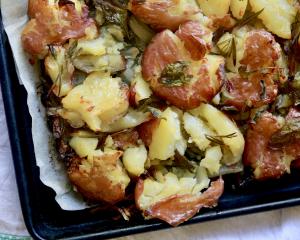 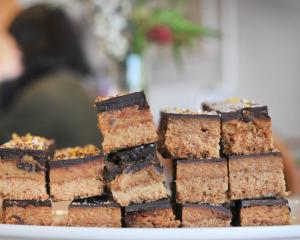 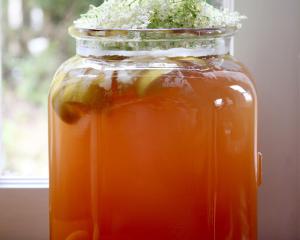