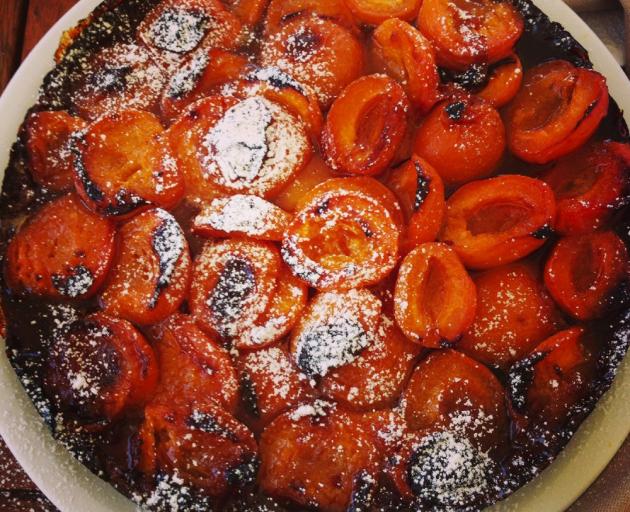 Line with baking paper the base and sides of a 28cm cake tin with a removable base.

To make the base, place butter, sugar and flour into a small bowl and mix together until a soft dough is formed. Press dough evenly into the bottom of the lined cake tin until 4mm thick with a 1cm-high lip of pastry around the edge.

Place into oven and bake for 15-20 minutes or until pastry is a deep golden brown. Remove from oven and allow to cool.

In a large heavy-based frying pan, place caster sugar and a quarter of a cup of water. Bring to the boil over a high heat until the water has evaporated and sugar is boiling in thick bubbles without colour.

Add apricots, reduce heat slightly and cook for 3 minutes or until apricots just start to become tender but still retain their shape.

Mix orange juice, cornflour and vanilla essence together and add to the apricots. Toss together carefully and continue to cook for a further minute until the cornflour thickens the apricots slightly.

Spread apricots over the cooked tart base and return to oven and cook for a further 25 to 30 minutes until apricot topping is thick and golden and jam-like.

Remove from oven and allow tart to cool for 30 minutes before removing cake ring.