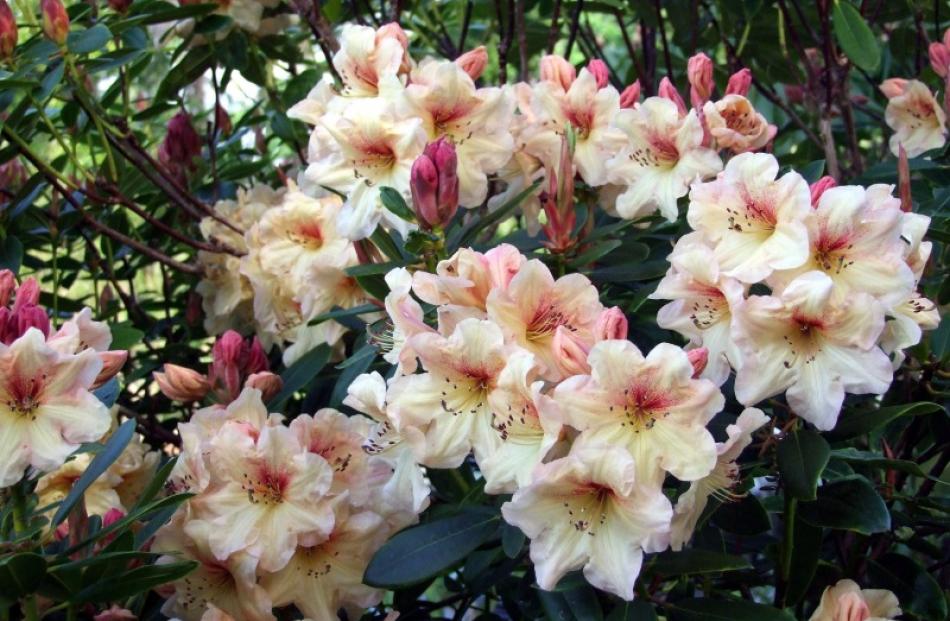 Removing dead heads from rhododendrons and azaleas will result in better displays. Photo by Gillian Vine.

Potatoes can be grown successfully without this step, but hoeing the soil from between rows on to the bases of the plants prevents the tubers being exposed to air and turning green.

Green potatoes have high concentrations of a glycoalkaloid poison, solanine, and should never be eaten.

Runner beans live up to their name and growth should now be rapid.

If not planted against a fence or trellis, or on a bean tepee, they will have to be staked.

Put tall (2m) sticks on either side of the row and tie string along about halfway up and also near the top.

Earthing up on either side of the plants helps them stay in place in windy conditions. Keep the roots moist and cool with plenty of water.

Lawn clippings can be used as a mulch but make each layer thin (1cm), as otherwise too much heat will be generated.

Peas can be staked but growing against netting is more effective for tall varieties.

Staple netting to several tall, strong stakes, leaving the lower 40cm or 50cm below the netting.

This makes a movable fence that can be used for peas year after year.

As the first tiny broad bean pods appear, the tip of each stem can be nipped out to help give a better crop.

The green tips of the plants can be eaten in stir-fries.

Removing dead heads from rhododendrons and azaleas will pay dividends with better displays next spring.

Sweet peas sown now will bloom late in the season. In general, heritage varieties have better perfume but smaller flowers.

Sweet pea seed can be sown in rich soil, then seedlings thinned to 10cm-12cm apart.

Less wasteful is to sow them in seed boxes and plant out when the first pair of true leaves appears.

Keep plants watered or they will produce small, miserable flowers on short stems.

Primulas, polyanthus, primroses and auriculas should be divided as soon as the plants have finished flowering.

Prepare ground for them by adding rotted horse or cow manure or compost.

If the soil is heavy clay, add coarse river sand to help it drain.

The plants like to be firmly fixed in the soil with the lower leaves just above the surface.

Old plants tend to lift out of the soil and will fail to flower freely if left undivided too long.

Wallflowers (Cheiranthus) are old-fashioned flowers with a distinctive sweet fragrance.

They keep going for years if deadheaded during the flowering season and cut back by half after flowering.

Like most spring-blooming shrubs, lilacs can be pruned when flowering has finished.

A mulch of decayed manure, mixed with some garden lime, will improve lilacs. Wisteria can also be pruned now.