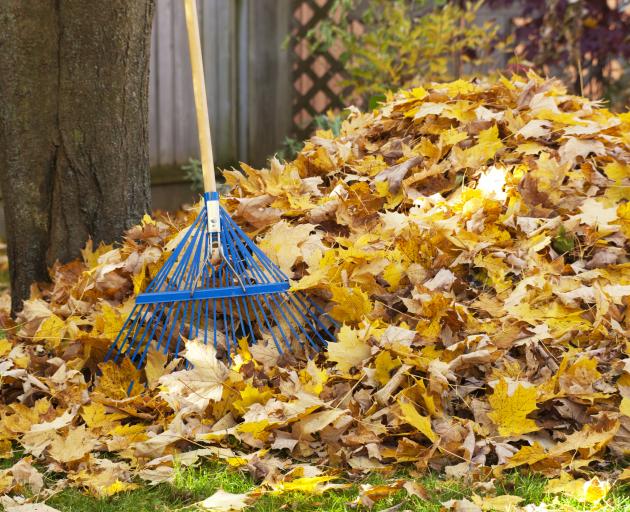 The last of the autumn leaves can be collected and added to the compost heap. PHOTO: GETTY IMAGES

Although the weather may be cold, every opportunity should be taken over the next few weeks to dig and manure the vegetable garden, leaving the ground exposed to the ongoing winter weather, which will help ensure it is in good order for next season’s crops.Sweetening the soil with lime added immediately after turning over the ground helps most crops, except potatoes.

Dig soft-wooded hedge clippings directly into the soil to decompose over the winter, or add them to the compost bin. Gather the last of the autumn leaves and stack separately to form a seed sowing/potting mix or add to the compost heap.

Left alone, most leaves take about a year to decompose into leaf mould. In the compost heap, they should be ready within half that time to use as a mulch or dig into the soil.

Also useful for the compost bin are vegetable scraps from the kitchen, seaweed, sawdust, lawn clippings and the contents of the vacuum-cleaner bag.

Jerusalem artichokes should have the dead tops cut off, but dig the tubers only as required. In storage, they shrivel and toughen.

However, the tubers can be lifted and kept in a corner of the garden covered with loose soil or sawdust, as recommended for carrots. The drawback with this is that any tiny piece of artichoke left in the soil or sawdust will sprout.

Asparagus plants should be cut close to the ground. An old practice was to leave the tops on the bed until they were thoroughly dry. They then were burned there, allowing the ashes to lie on the soil. As well as adding nutrients to the soil, burning destroyed any ripened seed, preventing random, inferior asparagus plants appearing. Unfortunately, fire bylaws in most areas mean this is no longer possible, so the cut stems should be removed and any berries picked off the soil and thrown away.

Late-flowering Clematis, including the Jackmanii group, should be pruned before growth begins in spring. Choose a pair of strong buds 30cm to 1m above the ground and prune 10mm above the buds. There should be at least two pairs of buds below the cut. Save prunings and use to propagate more clematis, using the method for shrubs.

Pruning hard may sound extreme but it removes all the unsightly dead foliage and enables the vines to be trained more readily on a trellis or fence.

Shrubs are expensive to buy but many can be propagated at home from cuttings taken now. The best are firm, well-ripened pieces of the previous season’s growth. Cut them into 25cm lengths, with the base cut squarely beneath a leaf joint and the top cut just above a leaf joint. Dip cuttings in hormone rooting powder then place in a corner of the garden or in pots and cover half their length with soil. Adding river sand to the soil will aid rooting. Tread soil firmly around the cuttings and repeat that action in a few weeks, because frosts and strong winds may have loosened it. Roots should be growing by early spring and some growth will be made in the summer. Transplant into permanent positions after a year.

Currants and gooseberries are ideal for small gardens and, like raspberries, well-tended bushes will last for years. Named varieties generally crop better and have bigger fruit.

There is an important distinction between black and red currants and that affects pruning: black currants fruit on the young, light brown growth, so removing branches that bore fruit last summer provides space for new shoots to bear next season’s crop. If a side growth of new wood 30cm or more in length springs from an older branch, prune the latter just above the new one. Otherwise, trim off all old branches near the base of the bush, just above a bud.

Red and white currants fruit on old wood, so pruning should start when the bushes are young to encourage the growth of five or six main branches. Each winter, reduce leaders (tops of branches) by a third in length and cut side shoots (laterals) back to 3cm long.

Blackcurrant varieties include Ben Mapua, Magnus and Tai Tahi, while redcurrants include Gloria de Versailles and Myra McKee. Since the arrival of the American gooseberry mildew in 1984, the number of gooseberry varieties has shrunk and only two named varieties, Invicta and Pax, have so far shown resistance to the mildew curse.

Grow gooseberries in an open, sunny part of the garden where the soil does not dry out. Two named varieties, Invicta and Pax, have shown resistance to mildew. Gooseberries fruit on old wood and on last season’s growth. Prune to keep the bushes open to let air circulate and to make picking fruit easier. Cut out any suckers below ground level.

Encourage vigorous growth by mulching with an organic manure and a top-dressing of potash at the rate of 50g a bush.