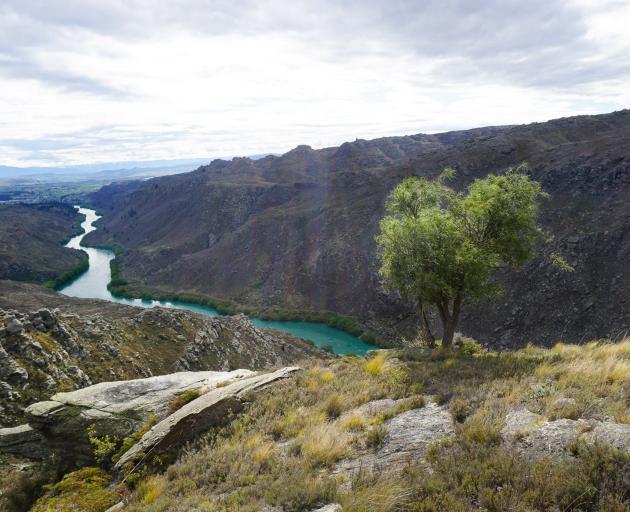 I start up the track on a bright Central Otago morning, as a light breeze sets the grass heads bobbing among the thyme. A small bird trills and chirps nearby, while a harrier hawk turns lazy circles over the hillside. With the golden brown hills stretching out in gentle folds under a wide blue sky, it’s a classic Central Otago scene. Classic, but as I’m coming to learn, far from the true Central Otago.

Over the brow of Flat Top Hill, where the thyme-covered land drops steeply towards the turquoise water of the Clutha Mata-au River, I find what I came here to see. Standing out in the barren brown hills is a shock of luminous green, the glowing foliage of a single kowhai tree. 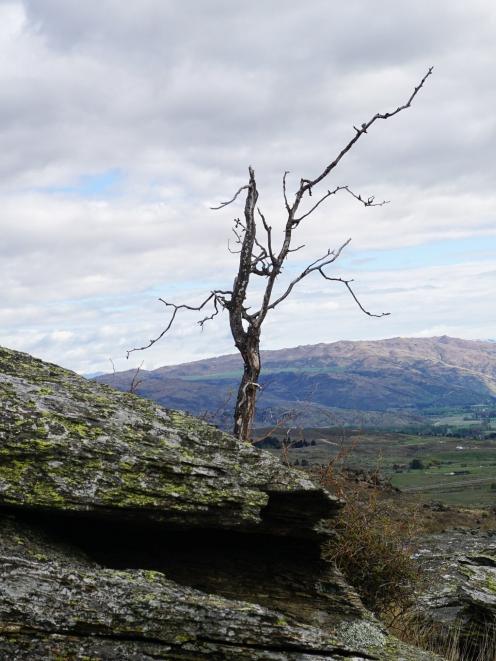 Skeleton kowhai on Flat Top Hill. Photo: Anna Yeoman
Dhana Pillai, eco-nursery manager for the Haehaeata Natural Heritage Trust, is familiar with trees like this one. "You see them in strange places, often on their own, sometimes just a very stunted little thing, struggling on," she says. "And you know those trees were once part of a forest, and we’ve lost all the rest of that forest."

Geoff Rogers, a landscape ecologist who has spent several decades studying the plants and animals of Central Otago, says trees and shrubs were the main component of Central Otago’s ecosystems. "Woody plants dominated from the valley floor to the low alpine zone."

In other words, when the first Maori arrived in Central Otago, they didn’t find golden grassland, but rather rich forest and shrubland. It’s an ecosystem that we struggle to picture, because there are few examples of it left. Our forgotten dryland woodlands.

"We lost virtually all Central’s forests in the first decades after humans arrived," Geoff explains. Campfires escaped and became wildfires. Fire was used to clear the land for ease of navigation and travel, and to aid the discovery of one of the most sought after resources, the quality stone needed for tool making. Later, fire was used to foster the growth of bracken, an important starch source for Maori.

The trees went and a lot of the birds too, from hunting and from habitat loss — the five species of moa that once inhabited Central Otago, the giant goose, the Haast eagle, the adzebill, the laughing owl and many others. These birds are gone forever, but a lot of the plants are hanging on, waiting in the wings.

I look at the kowhai, its grey-brown trunk as thick as my torso, its feathery green leaves alive in the breeze. Lonely it stands, presiding over a barren land. Over a graveyard even, if you’re feeling morbid. 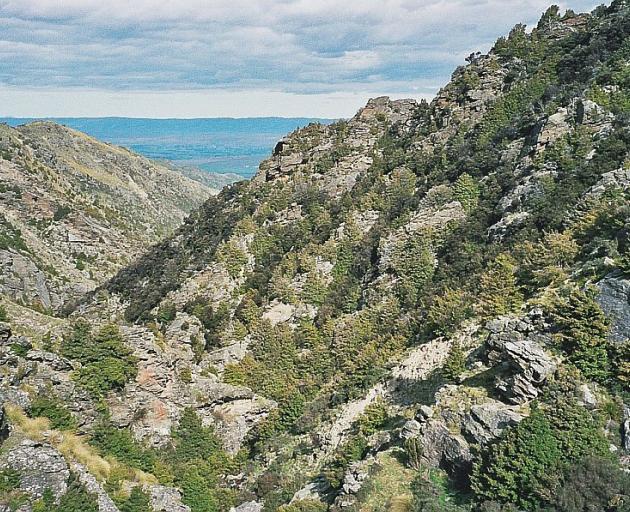 Remnants of Hall’s totara, mountain toatoa and coprosma forest in Laheys Creek, Dunstan Mountains. PHOTO: DEPARTMENT OF CONSERVATION
Polynesian fires struck the first blow to these woodlands, and six centuries later, European pastoralism did the rest. European settlers used fire on an annual basis to maintain the grazing land — to keep the shrubs down and to open the tussock for their sheep. The mammals they introduced — sheep, deer, goats, cows and rabbits — grazed on the new growth of any regenerating plants, further sealing their fate.

Geoff describes the lost woodlands: "On the basin floors [of Central Otago] there were low forest and scrub communities," he explains. Tree daisies, Olearia, with their small pale leaves and often fragrant flowers, grew up to 8m high and formed an open canopy. Corokia and Coprosma, with dense green foliage and bright yellow, blue or white berries, joined in the canopy. Hebe and the wild looking porcupine shrub grew in more open areas, along with button daisies and tiny forget-me-nots. And tangled among it all were creepers like the fragrant clematis vine.

Kowhai trees with their bright yellow blooms grew on rocky ridges and bluffs, as did lancewoods. Along watercourses and in damper gullies were leafy flaxes, ribbonwood and cabbage trees. On the hillsides, above the zone of the harshest frosts, the woodland transitioned to a forest of Hall’s totara, kanuka and matai. A little higher again, on the slopes of the mountain ranges where slightly more rain falls, were rimu, miro and areas of beech forest. And then a zone of sub-alpine shrubs. 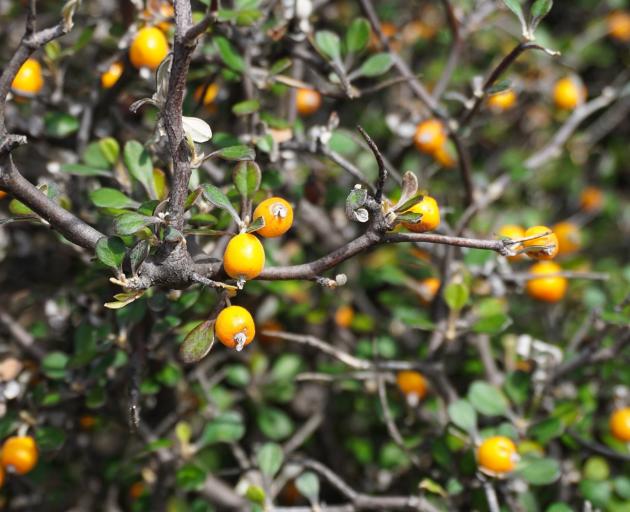 Corokia berries. Photo: Anna Yeoman
I take a seat on the slab of sun-warmed schist beside the lonely kowhai. Out to the west, the Old Man Range reclines in slumbering bulk while along its bare flanks the clouds cast giant purple shadows. I tear open a muesli bar and a McCann’s skink disappears with a rustle into the thyme. Otherwise everything is quiet, deeply quiet.

It wasn’t only plants in the picture. You don’t have plants without animals, and the place was alive with a myriad of birds, insects and lizards, all calling, rustling, foraging, basking, and swooping through the woodlands.

These plants and animals had evolved together to live in the drylands of Central Otago. In particular, our largest herbivore species, the moa, had a big influence of the shape of these dryland woodlands.

"New Zealand was probably globally unique in that we had birds eating the plants, and not mammals," Geoff explains.

To cope with heat and drought, Central Otago’s dryland plants have small tough leaves that minimise moisture loss, and can photosynthesise through their twigs as well as their leaves. This makes their twigs very nutritious. "The moa fed on the twigs of plants," Geoff explains. "Birds have got hard mouth parts, they haven’t got lips and soft palates. And they would have thrashed the plants!" 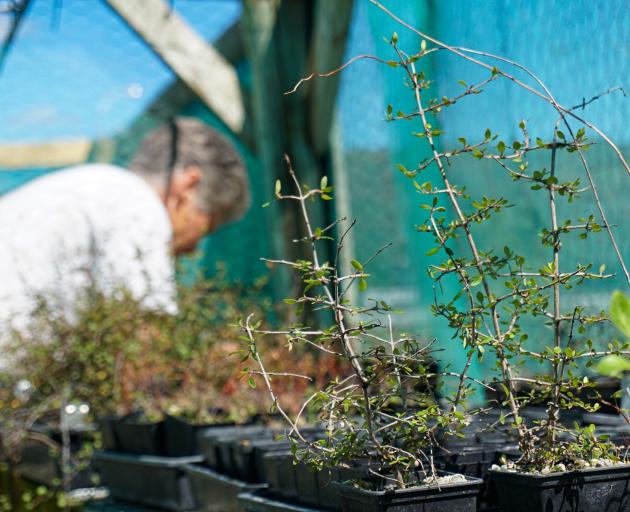 Volunteer Jo Wilson helps raise locally-sourced plants at Haehaeata nursery, Clyde. PHOTO: ANNA YEOMAN
Species such as the stout-legged moa — so solidly built that they’ve been famously described as "44-gallon drums on gumboots" — trampled paths through the trees and shrubs. Their grazing kept the canopy of the woodland quite open, so that plenty of light fell on the forest floor, where spring annuals and other small flowering herbs grew.

It’s a beautiful picture, and it feels worlds apart from the quiet brown land I’m looking out over. We can’t get the moa back. Is there any way we’re going to get any of it back?

Dhana has spent more time than most investigating this issue. The Haehaeata Natural Heritage Trust aims to re-establish areas of indigenous flora and fauna in the Alexandra basin. They gather seed from the remnant populations of trees and shrubs in the area, like this kowhai. They then raise young plants at the nursery, to be used in community planting projects.

Dhana explains that a big challenge is the impoverished nature of the soil here after so many centuries of burning.

"So although we know that all these woody plants once used to live here, it’s not quite as simple as just putting them back, because the conditions are now so different," she says. "They used to live in a forest for a start, and they used to have soil." 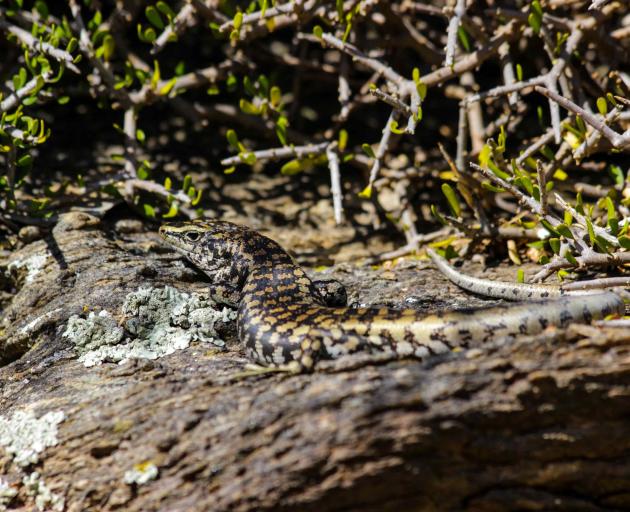 The porcupine shrub provides a safe retreat for lizards like this Otago skink. PHOTO: ANNA YEOMAN
Restoring areas of native woodland will be challenging, but not impossible.

"We really have to start with the pioneer species, and create habitat with the toughest plants," Dhana explains. Pioneer species, such as Olearia and Coprosma, will drop leaves, adding organic matter to the soil again. "Then we can bring in trees, like totara, that need shady conditions and deeper soils."

In the meantime, some change is already beginning to be seen in the landscape. "In the last few decades, as science has made clear the full impact of burning, fire as a high country run management tool has been steadily losing favour," Geoff explains. And with less burning, some of the hardier shrubs and trees are beginning to come back by themselves. Now on the Alexandra hills in springtime you see not only the pale purple flowers of the exotic thyme, but around the schist outcrops where the remnant plants and seeds have found some protection, yellow starred Corokia bushes and white flowered Pimelea are beginning to re-assert themselves.

Dhana sees regaining native biodiversity in Central Otago as vital. "So far we’ve just been destroying it, it’s about time we started protecting it," she says. "Woody vegetation protects and cools the soil, which modifies the local climate and gives us greater resilience for climate extremes," she explains. Well vegetated land also sequesters more carbon, and supports fewer rabbits. It improves the quality of waterways. And it’s vital habitat for our native animals. 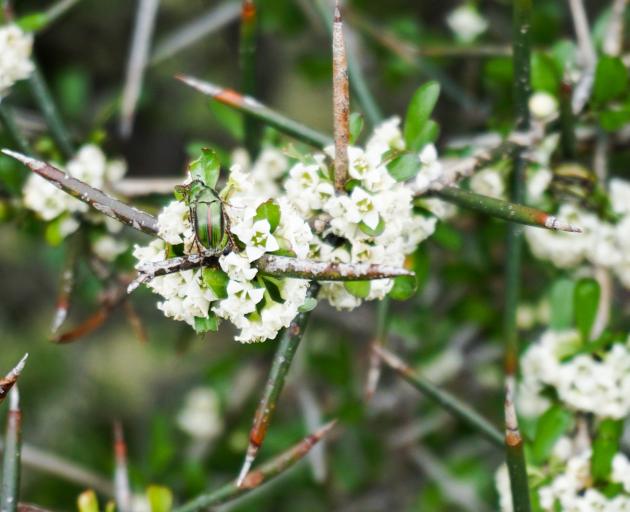 The sweet-scented flowers of matagouri are food for diverse insect life. PHOTO: ANNA YEOMAN
Although the moa won’t be returning to Central Otago, a good number of other birds can and will, if the woodland habitat is there. The woodlands used to support a rich and raucous birdlife including kaka, bellbird, rifleman, kereru, kakapo and kiwi.

Central Otago was a hot spot of lizard diversity too, from the foot-long Otago skinks to the striking jewelled gecko. Lizards need the woodland shrubs such as Coprosma and porcupine shrub — they feed on the berries and flowers, and find protection from heat, cold and predators within their dense foliage. In turn, the foraging geckos and skinks pollinate the flowers and disperse the seeds. Woodlands support our rich native insect life — 15 species of moth have been found to feed only on Olearia. 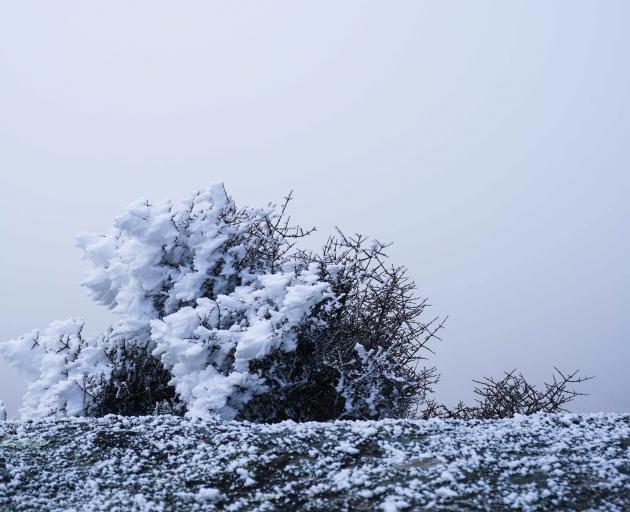 Coprosma have evolved to survive the hoar frosts and sub-zero temperatures of the Central Otago winter. PHOTO: ANNA YEOMAN
Dhana has been encouraged by the involvement of local people in the nursery working bees and planting days, and the nursery has been asked to provide plants for some large-scale planting projects. "It’s really great that the momentum seems to be building," Dhana says. "A lot more people are paying attention to our natural environment, and that’s a good thing."

As I scramble my way back to the track, my eye is caught by a skeleton tree trunk on a rocky knoll, upright as an empty cross. I traverse awkwardly through the thyme and spaniard to reach it, and find not one but three tree remnants among the rocks. Although the bare, twisted trunks don’t give many clues, a short investigation reveals they’re kowhai too, because I can see the soft koru of new leaves on a couple of the gnarled and scarred branches, and, at the base of the most skeletal tree, the distinctive tiny green leaves set on a tangle of wild orange new growth.

Another well researched gem, thanks Anna and ODT. Good days a learning day.

Restoring, rewilding and protecting our natural environments should now become a top priority for all of us. It is the key to preventing further pandemics, slowing down climate change and reversing the mass extinction event that has already begun. It is essential for future life on this planet that we all do what we can to reduce our impact upon it. Consume less, eat less animals, waste less, reuse and recycle what you can. And if you are fortunate enough to own a little piece of land, pull out all the exoctic plants and recreate a little piece of natural New Zealand where bio-diversity can flourish.
Great article, thank you.