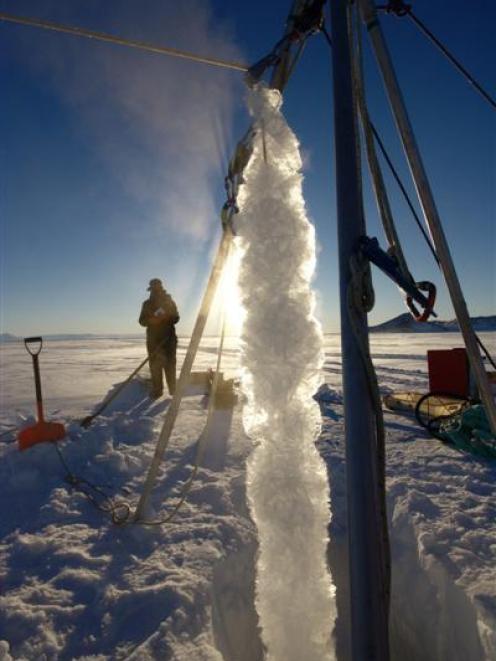 Alex Gough of the University of Otago Department of Physics takes notes as an oceanographic mooring is raised from beneath the sea ice in the Antarctic. The mooring was in place throughout the winter and its rope acquired a growth of platelet ice, which is steaming in the cold air. This kind of ice is rare in the Arctic and may be one of the reasons why Antarctic sea ice is not behaving like sea ice in the Arctic. Photo by Andy Mahoney.
In the race to learn more about how climate change will affect us, scientists are focusing on ice, Geoff Cumming reports.

Most of us know there are different kinds of ice: there's the ice cubes in our gin and tonic and the ice that forms in the back of the freezer.

Few of us think much deeper about ice. But some scientists are so interested they were happy to spend last winter in the dark on the Ross Sea, New Zealand's patch of Antarctica, in temperatures down to minus 50degC, studying ice.

They measured its thickness. They dissected it and studied its crystals, which look spectacular in a certain light. They melted it to see how salty it was. They worked out how quickly it grew. They took its temperature.

Some might wonder why our tax dollars are used to fund such research - putting up three men in heated shipping containers to drill holes in the sea ice which forms a skirt around the Antarctic ice shelf in winter.

Of course, they weren't only interested in the sea ice: they studied the water beneath - its temperature, salinity and the currents.

The scientists say what happens to sea ice has a ripple effect around the globe, influencing even the temperatures in which we enjoy that G and T.

The polar climate has a major effect on world climate. The ice acts like a mirror to reflect heat back into the atmosphere, and moderates atmospheric temperatures by locking up energy as it freezes.

And the sea ice, which doubles the size of Antarctica in winter, is indeed different from the permanent ice shelf - forming from salt water whereas the ice shelf forms from freshwater snow off the continent. Different forces are at play in its formation.

The continued appearance of sea ice in winter is important to the food chain beneath, from the algae that forms on the bottom of the ice to the whales that feed on krill in the deep ocean.

As it forms the salt is rejected, increasing the water's salinity and density. It sinks to the depths, carrying oxygen which supports marine life and contributing to the circulation of the oceans which move heat around the planet. And if the water is warmer, it warms the air above it.

Changes in the sea ice are also an important indicator of climate change - as its dramatic retreat in the Arctic suggests. But in the Antarctic, supercooled waters from the melting ice shelf are thought to be one reason why annual sea ice formation has not declined.

Scientists at the University of Otago, Niwa, Victoria University and Industrial Research Ltd (a Crown research institute) with Antarctica NZ's support are jointly working to better understand the processes influencing sea ice formation in the Ross Sea: the interrelationships between the ice shelf, ocean and atmospheric conditions and sea ice.

Last year's data-gathering exercise - a team of three spent nearly nine months on the ice - was funded by the Foundation for Research Science and Technology as part of the International Polar Year, which focused on climate change. The three-year programme attracted about $1 million in funding.

The sampling has provided evidence for what scientific modelling had suggested: that waters "supercooled" by the melting ice shelf are contributing to sea-ice formation - that the process is not just down to atmospheric cooling.

Studying changes in the crystal structure confirms that at a certain depth the ice forms as platelet ice, indicating that very cold water is in play. This contributes an additional 10% to 20% to the thickness of the sea ice - volume which is important to the sea ice's moderating influence on climate.

Although instruments can record ocean and atmospheric conditions and satellites can measure the surface extent of sea ice, they cannot tell how thick the ice is or how quickly it is growing.

The only way to get the evidence was to spend winter on the ice, says physicist Andy Mahoney, who led the expedition.

"Only a handful of people have stayed out over the whole winter before."

Mahoney, Otago PhD student Alex Gough and Brian Staite from Antarctica NZ added to the risks involved by doing much of their sampling on newly-formed ice, to give a "zero ice" base for their measurements.

"We were the first group to do it on first-year ice for a very long time," says Mahoney.

They were dropped off at Scott Base in February and conducted experiments throughout winter, returning to New Zealand in October. The trio first conducted sampling on thicker multi-year ice while waiting for the new ice to grow.

Once it was a metre thick, they put insulated shipping containers on the ice with holes in the floor to drill through. They used instruments to measure water temperature, salinity and currents and measured ice temperature and thickness and worked out its rate of growth.

They also studied the ice's crystalline structure, linking the establishment of platelet ice to supercooled waters coming from under the ice shelf.

From May until July they worked in virtual darkness, relying on headlamps and vehicle lights.

"We were lucky with the weather - we only had a couple of big storms which kept us on base and the vehicles and equipment just kept ticking on by."

They camped some nights on the sea ice, conducting 26-hour observations, but most days they returned to Scott Base for practical reasons.

"The coldest we saw on the thermometer was minus 50 - while sitting in front of a stove with a cup of tea," says Mahoney, a British physicist with 10 years research experience in the Arctic who has now moved to Alaska University.

"We generally would cut off at about minus 40 because below that we would put the vehicles and ourselves - and anyone coming to rescue us - at risk.

"I think we've established that the logistics to do science in winter are not that difficult. We were just physicists but we saw lots of things we thought would be really interesting to the biologists. It would be really good to have a team of scientists from all disciplines down there."

Pat Langhorne, an associate professor in the University of Otago's sea-ice group, says the sampling has changed scientists' understanding of the processes taking place.

"What our measurements have shown is that in the vicinity of an ice shelf that's really not good enough - that probably 10% to 20% of sea-ice thickness comes from heat loss to the ocean, which has come about because it has interacted with the ice shelf."

She says the research has linked sea-ice formation to "episodic bursts", when supercooled waters come out from under the ice shelf.

But as with most science, the research raises as many issues as it answers, she says. "It raises questions about what events cause the cold water to come out at that time.

"We found our nice simple picture of what happens wasn't true."

There is a huge amount to be learned from sea ice, says Niwa marine physicist Mike Williams. Global warming - while melting the ice shelves that contribute to sea-ice formation - is expected to cause a long-term decline in the amount of sea ice, contributing to ocean and atmospheric warming.

Some models predict average sea-ice volume in the Southern Ocean will retreat by a third in the next century. This will in turn reduce salinity beneath the sea ice, affecting marine life and currents in Antarctic bottom waters. And it will reduce the moderating influence of polar air on climate.

"We know that when we have an El Nino or a La Nina then that changes the sea ice as well.

"There are really quite intimate links between global climate and sea ice."

He says understanding how changes in Antarctica will affect global sea levels is a major scientific focus.

"In the order of 50m or more of sea level is locked up in the ice in Antarctica and we really don't know how long that will take to melt. We'd all like to say it's hundreds to thousands of years and, if all we were doing was waiting for changes in air temperature, that would probably be the case. But what's happening under the ice shelves and how it might influence global climate is something we've only been thinking about for 10 years or so."

Williams says the mission has modified thinking about the processes taking place.

"We no longer think that the ocean is making the ice, so to speak, but believe that because the ocean is cold it is not retarding sea-ice growth.

"Water has to cool down to grow sea ice but if the sea ice is already at the freezing temperature, then the energy in the atmosphere can grow the ice straight away. In that situation the ice grows faster, and that allows more salt to be rejected into the ocean."

The mission has provided a vital baseline for further research. The scientists hope the results will help in modelling future climate change, such as how, if the big ice shelves begin to melt, might it influence sea ice.

Discussions are under way with Antarctica NZ to set up an ongoing ice-monitoring programme using instruments attached to automated ocean moorings - so scientists don't have to sit out every winter on the ice.