Confessions of a commercial artist 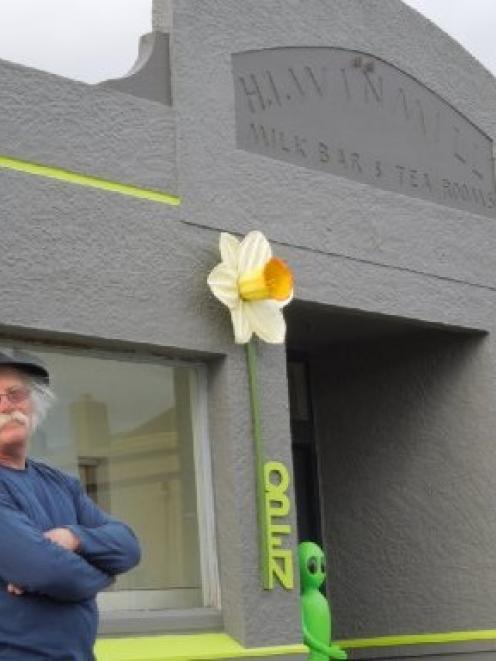 More recently, he has completed three-dimensional work in the Dunedin area, including displays at the Royal Albatross Centre and the University of Otago Marine Science Centre's Portobello aquarium.

These days, he lives in Lawrence where he has a small art gallery, Exit Studio.

Q Why do you do what you do?
A Coming to the later part of my working life, it is a treat to give lots of ideas a go, and really get into ‘‘making stuff'' using a diverse range of media.

The casket aspect is a developing service that has its own special rewards from appreciative families.

Q What is your earliest memory?
A At the Knighton Rd School fair, aged 4 or 5 I think, I had heard some other kids boasting that it was easy to steal coconuts from the coconut shy.

You went around the back, reached through a gap in the tent and there they were. Somehow, I managed to get away from my older sisters and mustered up the courage to give it a go.

I raced around the back of the school buildings with my prize, but then didn't know what to do with it.

Attempts to conceal it down my shorts and then up my singlet didn't feel like they worked very well, and I knew I would get asked where I got it.

I felt so bad I gave it to another kid, and from there, my career of theft fizzled out. I took to making stuff instead.

Q What did you want to be when you were growing up?
A In standard 3, in 1963, a vivid memory, is one day at Hillcrest Normal School in Hamilton: they were called normal schools because they had elevated rooms at the back behind one way glass, where trainee teachers could stand, and learn how it's done.

We would use them as a class sometimes and sit on the floor up there for lessons.

This day, I was staring intently at the teacher, but got carried away with a huge vivid surge of enthusiasm and inspiration in my head, and thought excitedly, ‘I'm really going to try at school. Yeah, I'll work hard, do lots of homework, and get really good at something.

‘‘You didn't hear I thing I said, did you Graeme?'' she said loudly for the class's benefit, and I was made to sit in the corridor until I had some desire to pay attention and learn.

Q What is your most embarrassing moment?
A I was to play guitar and sing at an end-of-year concert with an audience of about 500, at the Wellington Teachers' College where I worked. It was 1980, I think.

I was waiting in the wings for a drama piece to finish, and very nervously looking for my cue to go on. There was a long pause, nobody on stage and so I thought this was it.

I strode on, took centre stage and had just opened my mouth to say something, when act four of the drama piece came on, didn't see me at first and opened their mouth to begin, saw me in prime stage site and froze, wondering who I was, standing there like a fish.

It was a difficult pause and took a second for me to register that I was the one who had to swallow and back out.

Q Property aside, what is the most extravagant thing you have bought?
A Extravagant purchases need spare cash, something that has been short.

If I do save some extra, I use it to buy time off rather than things.

Mind you, I have an array of stuff (which some would say is a bit excessive), from my kind of shop heaven, Rietvelds machinery dismantlers and sales persons of one-day-useful-objects-of-desire.

Q Who would play you in the film of your life?
A I would have said Robin Williams, but Billy Connolly's got the language and the right hair.

Q What is your guiltiest pleasure?
A Emersons Bird Dog beer. No, Pilsener. Hmmmm, maybe Peanut brownies or pavlova that's chewy in the middle (because it didn't work out) with stewed peaches on top.

Fruit cake. Hazelnut chocolate ... I know, French vanilla ice cream with blackberry syrup, loud music on a sunny porch in the morning when you should be working.

Q What would be your dream job?
A Dream job? That's an oxymoron. Making stuff for off-the-wall projects, films etc.

Q Who would you invite to your dream dinner party?
A I would muster up a gathering of all the clerics, popes, ayatollahs, priests, swamis, ministers, rabbis, New Age pastors, evangelists and some world leaders.

Knock up a bonfire down near the whitebaiters at Te Wae Wae Bay ( the sandflies will have the day off out of respect), and put together a great seafood nosh-up.

The Topp Twins would lighten things up, and help arrange Otago's finest fruit and veg, wine etc. Perhaps ‘‘Ken'' could escort the dignitaries to the site in the Hillman Hunter, and Camp Mother could ensure all the long flowing robes didn't get caught in anything.

Then we would discuss that this religion thing wasn't really working for the good of all things because everybody thinks that their one is ‘‘it''. We would discuss that we need a new kind of relationship for all, based on care, and our wonderful bio-diverse reality.

Q What single thing would improve the quality of your life?
A A sign of success from the above

Q What keeps you awake at night?
A Too much of those guiltiest pleasures.

Also I notice that 2 or 3 in the morning is when self-doubt and insecurities surface, thoughts like ‘‘You're doing What Graeme! Idiot! You don't have the skills to do that. What were you thinking!'' etc etc.

When it's light and the feet are on the floor, things are OK again.

Q What song would you like played at your funeral?
A I made a CD called One thing at a time about 2009. It's a bit rough, and has been on Bandcamp for few years now, like a pebble in a quarry, and nobody's looked at it.

At the funeral - it's their pick. Maybe Cup of tea. Other peoples' music?

Oh, there are lots. Somebody's bound to suggest the Florence and the Machine song about her boyfriend.