Confessions of a resourceful surfer 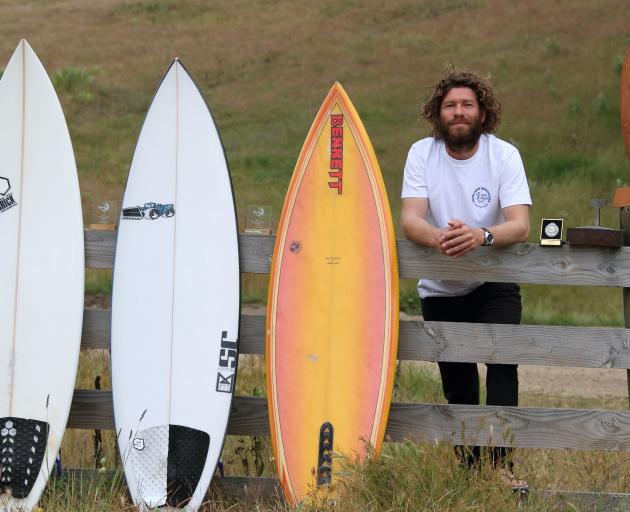 Landlocked surfer John Klevstul, of Bannockburn, is not disheartened by his proximity to the ocean. Photo by Rowan Klevstul.

Surfer John Klevstul lives with his identical twin  Rowan in Bannockburn, close to the most inland point in the country. He has managed to become the Auckland senior men’s surfing champion and a 2016 Central Otago Sports Awards finalist, despite having to drive for hours to reach the nearest beach.

Q Why do you do what you do?

A Surfing is the best thing in the world. It keeps me motivated and fit. Stoked and amped. Nothing gets me out of bed and moving like the anticipation of chasing waves.

Living in the most inland part of New Zealand, this presents certain challenges, but the lure of the search is irresistible. Despite having nowhere locally to surf, the benefit of being central is the opportunity to go either east, west or south depending on conditions. This is a bonus others who live in more coastal locales may appreciate.

Not many things I'm aware of can make fully grown humans giggle and scream like the joy of riding waves. Ultimately it's a rather cosmic endeavour of catching bands of moving energy that have come from the sun, travelled through space to enter our atmosphere and drive weather which results in swell finally reaching a beach to extinguish on to the sand, and if you can harness that force and ride, it's an incomparable feeling.

Q What is your earliest memory?

A Mum would hang sheets on the washing line at our house in Macandrew Bay in big swooping folds. My twin brother and I were so little, we could crawl inside the part hanging low to the ground and lay there without them coming unpegged. We called this ``playing watermelons''.

Q What did you want to be when you were growing up?

A As soon as I discovered surfing at the age of 12, all I wanted to be was a professional surfer. This was fuelled by magazines and videos from the US and Australia.

This era of surfing in the late '80s and early '90s was the pinnacle of what could be referred to as ``old-school'', so my roots in surfing were generated in the Day-glo, fluorescent period where power-surfing ruled. And it just looked so damn cool.

Then Kelly Slater burst on to the scene in the early '90s, redefining what was possible and a revolution that became ``new school'' emerged. Along with my brother and surf-mad friends on the North Shore of Auckland, I was hooked.

Q What is your most embarrassing moment?

A Let's just say there was me, a girl, and the St John Ambulance emergency rescue team.

Q What is the most extravagant thing you've bought?

A My beloved Channel Islands 6234 KS Semi-pro 12. This board arms me with confidence when the waves are grinding, and has been a centrepoint of some of the most memorable and dramatic rides of my life.

By the time you add carbon fins and shipping, it cost a small fortune, but I get so pumped every time I just look at it and put it under my arm, let alone paddling out on it when the surf is firing.

Q Who would play you in the film of your life?

Q What would be your dream job?

A Honestly, if I knew, I'd be doing it. Been trying to work that one out for years. But it would definitely involve travelling the world, going to exotic locales, catching amazing waves with awesome people and getting paid handsomely.

Even recording and documenting the journey to share with others to show the diverse and incredible planet we live on and to help raise awareness about how imperative it is to respect and cherish nature, especially the ocean. If I could do that and have my twin brother Rowan along for the ride and working together, that would be all-time.