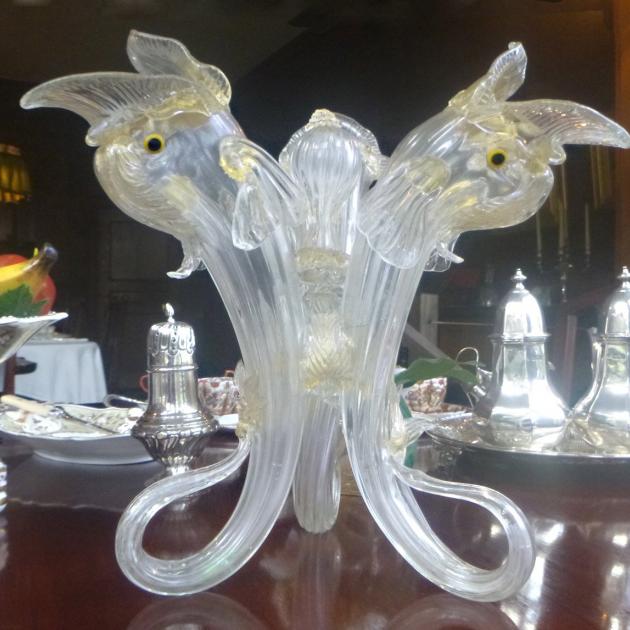 These Italian glass items are eye-catching additions to the decorative pieces in the Theomin’s dining room at Olveston Historic Home. The blown glass dolphins, with gold flecks, were made on the Venetian Island of Murano under the prestigious Salviati name. There are several shapes in use: the form with three dolphins could be used as a vase; a small glass dolphin was used as a place card holder, and other dolphins were used as table decorations.

The dolphin motif itself is synonymous with Venice, dating back to Roman times when it featured in mosaics, afterwards being linked to the printing industry through the Aldine Press which was established in 1494 by Aldus Manutius. He adopted the image of a dolphin wrapped around an anchor as his publisher’s device in 1502.

The dolphin-and-anchor symbol is associated with the phrase "festina lente", meaning "make haste slowly", indicating quickness combined with firmness in the execution of a great scheme. The symbol and phrase were taken from a Roman coin minted during Emperor Vespasian’s reign that was given to Manutius by Pietro Bembo. 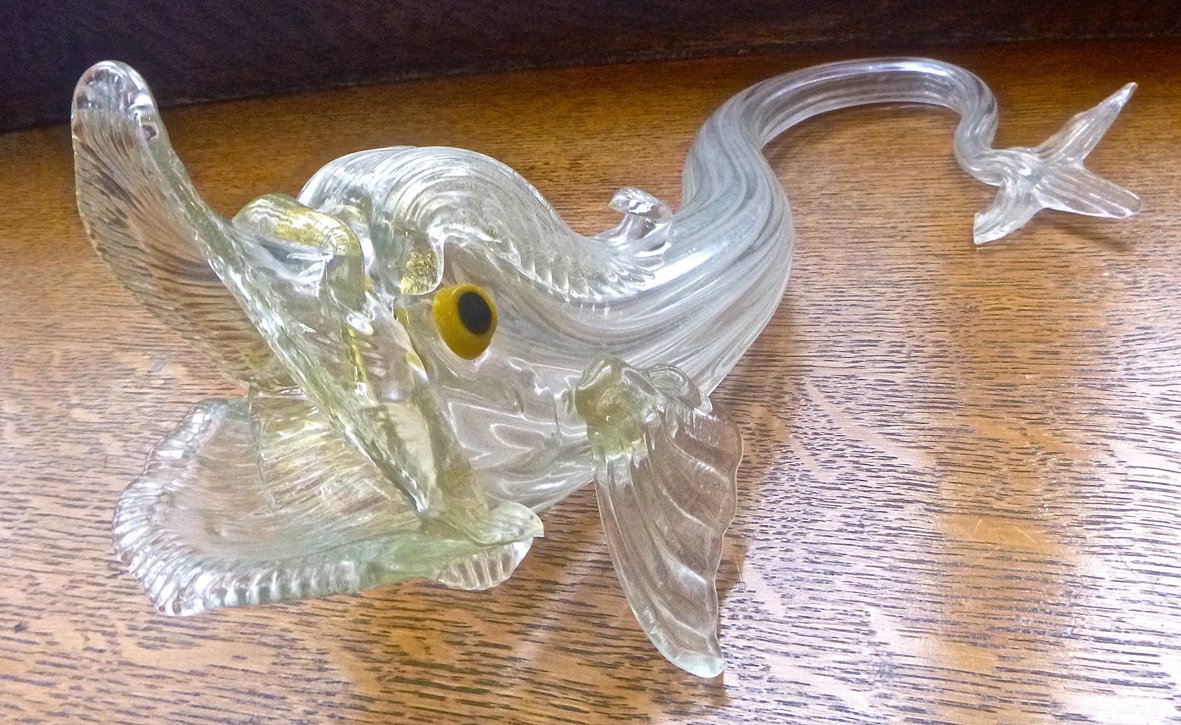 Single glass dolphin by Salviati, showing detail of gold flecking.
Manutius’ publishing philosophy ensured the survival of many ancient texts and greatly facilitated the diffusion of the values, enthusiasms, and scholarship of Italian Renaissance Humanism to the rest of Europe. His "enchiridia"—– small portable books — revolutionised personal reading and are the predecessors of the modern paperback. Manutius’ editions of the classics were so highly respected that the dolphin-and-anchor device was almost immediately pirated by French and Italian publishers. Many modern organisations use the image of a dolphin wrapped around an anchor.

That was an interesting diversion about the dolphin motif; now let’s get back to the Salviati glass dolphins in the Olveston collection.

Antonio Salviati (1816–90), was an Italian glass manufacturer who helped re-establish Murano as a centre of Italian glassworking and was instrumental in stimulating European interest in brightly coloured, ornate pieces of Italian glass.

Murano had been a glassmaking centre since the European Middle Ages, but in the 19th century the industry was revitalised by Salviati and others who adapted traditional skills to modern manufacturing processes. Salviati’s firm helped promote glass as an accessible art form and encouraged the public to collect glass ornaments and tableware.

A lawyer by profession, Salviati became involved in restoration work being done on the mosaics of Venice’s St Mark’s Cathedral. His interest in mosaics led to an interest in glass and, ultimately, in glassmaking. He established his first business in 1859 with a partner, Lorenzo Radi, and within a few years began receiving major commissions from abroad.

Salviati was the first modern Italian factory owner to employ many skilled workers to produce glass in quantity and designed primarily for export. His factory’s designs were seen at exhibitions throughout Europe, and their elaborate ornamentation was popular in the Victorian era. Before Salviati’s time, the production of art glass had been restricted to unique and expensive pieces, available only to the wealthy. By the late 19th century, through the efforts of Salviati and other progressive manufacturers, most Victorian parlours possessed at least one piece of colourful glass.