Deserting for the goldfields 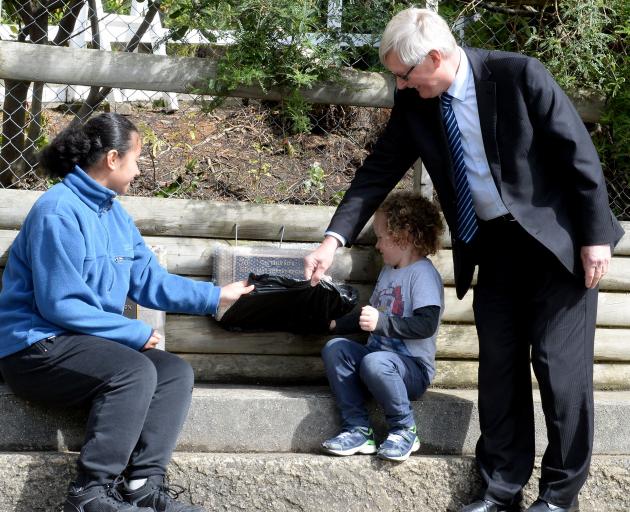 Arthur Street School pupils Vanana Eteuati, left, and Jasper Shoemaker help then Dunedin deputy mayor Chris Staynes unveil a plaque at the school in 2017, dedicated to the Royal East Surrey Regiment 70th Foot, which camped on the site of the school in 1861. PHOTO:LINDA ROBERTSON
The story of the Dunedin detachment is an important part of the 70th Regiment’s history, writes Paul Gorman. 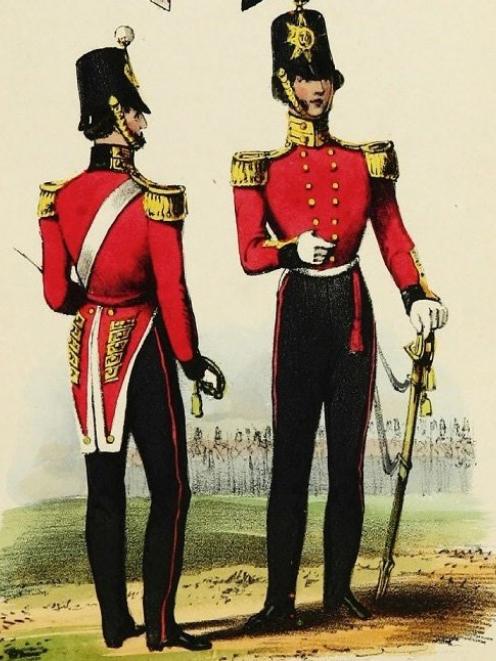 The uniform of the 70th Foot in the mid 19th century.
Drunk, bored and plagued by thoughts of desertion, soldiers of the British Imperial Army languished in Dunedin while the 1860s’ Gold Rush excitement passed them by.

One hundred rank-and-file soldiers from the 70th Regiment were sent to Dunedin in 1861 to help police the booming Central Otago goldfields.

But they never made it much further than the top of Arthur St.

The full regiment had sailed from Calcutta in India in January 1861 to bolster troops fighting in the Taranaki land wars, but by the time they arrived in Auckland in May, an uneasy ceasefire in the region meant they were not needed.

While mooching around the military camp at Otahuhu, the opportunity arose for some to head south to keep the rule of law in Otago.

Unfortunately, by the time they arrived in November, they weren’t needed there either, beaten to it by experienced gold escorts from Australia.

No wonder morale and motivation were pretty low during their two-year tour of duty.

Te Herenga Waka — Victoria University of Wellington historians Prof Charlotte Macdonald and Maggie Blackburn have been researching the behaviour of the detachment sent to Otago, using records of courts-martial for desertion and drunkenness.

Ms Blackburn, an MA student, says the files provided rich nuggets for building up a picture of life for the soldiers.

"Our hypothesis was that the goldfields would have proved sufficient temptation to encourage members of the regiment to desert. Much of the research I did outside of the mapping exercises was trying to find tangible links between deserters and the goldfields.

"One of the sources I used fairly extensively throughout this project was the now digitised Otago Police Gazette, which provided a nice insight into the men themselves.

"Deserters were listed in this periodical, with detailed descriptions, in the hopes that members of the public might assist in their apprehension."

There were 14 courts-martial held between 1861 and 1863 — with 10 men appearing on charges of desertion and the remainder for being either drunk on duty, exhibiting "habitual drunkenness" or leaving their post.

Sentences were harsh. Most were given 84 days’ hard labour, though some served more, and each deserter was branded, like cattle, with a "D" on the left side of their chest — a common punishment.

Desertion rates in Dunedin were much higher than at the barracks in New Plymouth, where only one man was charged with desertion between 1863 and 1865.

Dunedin military researcher Peter Trevathan holds an ink bottle and a piece of stoneware discovered during an archaeological dig for evidence of the 70th above Otago Boys' High School. PHOTO: PETER MCINTOSH
There were also a significant number of desertions from Camp Otahuhu in the north, where the regiment was just as idle as in Dunedin, Ms Blackburn says.

"Where the temptation of gold and chance of accruing riches on the goldfields was present, the potential benefits of desertion outweighed the punishments awaiting the men if they were caught.

"It is also possible that the presence of a second large group of men so close at hand — the gold seekers — made success of desertion a more likely prospect in Dunedin, whether or not the deserter intended to follow the rush to the goldfields.

"With the transient communities of the gold towns and subsequent population explosion in Dunedin, it would have been easier to disappear into the hubbub of activity generated by the goldfields than into the bush in Taranaki."

Prof Macdonald says the stagnation of the detachment in Dunedin forms an important part of a global story.

"Here’s a history investigation about New Zealand in 1861, when almost simultaneously there’s war in the north and gold discovered in the south, and one of the things that connects them are soldiers that came from Calcutta.

"People often think that the New Zealand Wars of the 1860s were really only a North Island story. But we see it is absolutely not the case. Here’s one instance with a connection between imperial soldiers sent to fight in Taranaki, but they end up in Dunedin."

Otago superintendent Major John Richardson, who arrived in Otago in the early 1850s, knew the troops had arrived in Auckland and were at a loose end, Prof Macdonald says.

"He’s a very persuasive and canny politician, a successful public figure, who requested the regiment’s help. So these 100 or so men get sent to Otago in November 1861 and they are there for about two years. But they never actually do a great deal because of the Australian gold escort already brought in by police commissioner St John Branigan.

"They build themselves a barracks, initially in Arthur St where the school is now I believe. They stayed there for six months before relocating to a site above Otago Boys’ High School.

"They helped fight a fire on Princes St in April 1863, with much appreciation of that, they played some cricket and went to the theatre."

The temptations to desert were easy to understand, she says.

"If you were a rank-and-file solder in 1861 in Dunedin, when there’s a gold rush going on up the road, why would you sit it out in the pretty harsh conditions, get paid almost nothing, a shilling a week, be under the cosh of the military and rule of obedience? It’s nothing very glamorous at all.

"Why not just skive off to the goldfields and have your own chance?"

Ms Blackburn says soldiers could buy a discharge to leave, and become soldier-settlers, before ending their term of generally 12 years.

"There were two men I came across, Joseph and Michael Jennings, probably brothers, who did just that and ‘discharged by purchase’ in Dunedin on April 13, 1863.

"However, more men, 25 in total, about a quarter of the whole detachment, deserted instead.

"Nine of those appear to have deserted ‘successfully’ — they did not appear again in any army records, indicating that they didn’t re-join the army at any point and were not court martialled for their offence."

The story of the Dunedin detachment is an important part of the regiment’s history, she says.

"Their short tenure in Dunedin, and the military presence in the South Island altogether, has faded from memory and from popular and scholarly histories.

"It was fitting that in 2017, following archaeological and historical work done in the area by local military historian Peter Trevathan, a plaque commemorating the service of the men of the 70th was unveiled at Arthur Street School — on the site where the men of the 70th camped for six months at the beginning of their term of service in Dunedin."

- For more information on the 70th Regiment and its Dunedin detachment, check the Te Herenga Waka — Victoria University of Wellington’s "Soldiers of Empire" website.