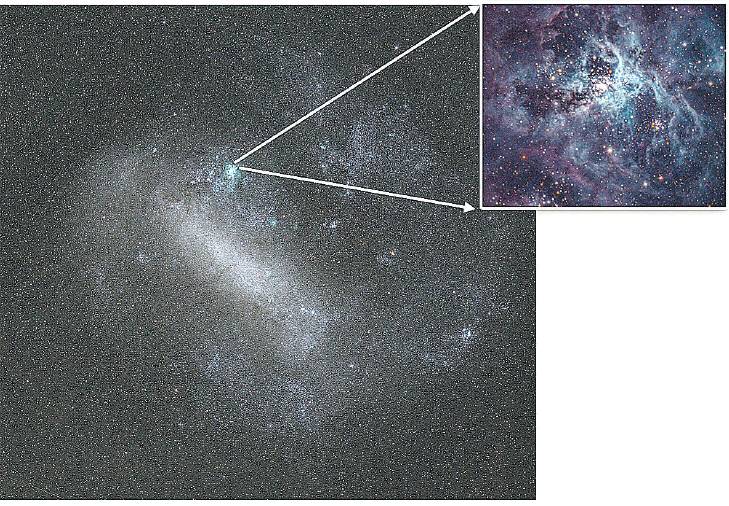 The Tarantula is a bright region of glowing gas on the outskirts of the LMC. Photos: supplied
This week, I would like to encourage you to set yourself an unusual task, writes Ian Griffin.

I want you to find a tarantula.

Arachnophobics should not be concerned because this particular spider is celestial. Rather than lurking in dark corners of your garden, the Tarantula Nebula is part of the Large Magellanic Cloud (LMC), which this time of year is high in the southern sky after sunset.

To find our quarry, you will need a good pair of binoculars and a comfortable deck-chair. As this week’s accompanying photographs show, the Tarantula is a bright region of glowing gas on the outskirts of the LMC.

While the object has been studied for centuries, the name Tarantula is comparatively recent. It relates to how the nebula appears in long-exposure photographs. As you can see from the close-up picture (taken using a telescope at the University of Canterbury’s Mount John Observatory), astronomers have vivid imaginations!

The distance to the Tarantula Nebula is estimated to be 160,000 light-years. At the heart of this radiant cloud of dust and gas is a cluster of bright stars called R136. Incredible amounts of energy are released by these hot blue stars, which are among the most massive and luminous ever observed. 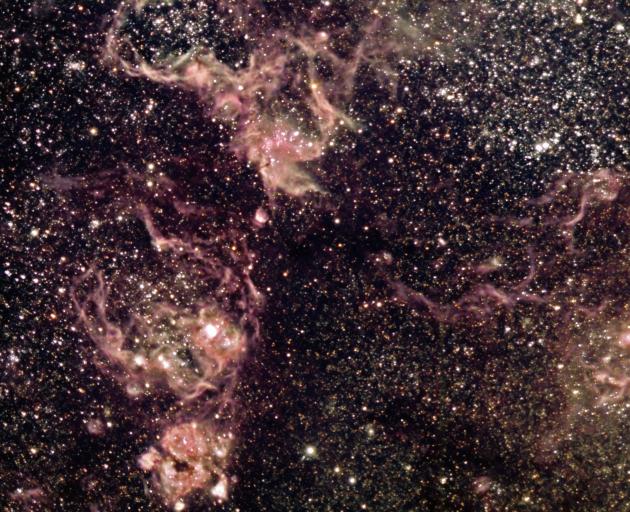 The Tarantula Nebula. Photo: Getty Images
Stars such as this live their lives fast and die young, often in incredible explosions called supernovas. Astronomically speaking, this is a very young cluster which probably formed less than two million years ago. It will, therefore, be quite some time before any of these stars explode.

The Tarantula Nebula was first observed by the French astronomer Nicolas-Louis de Lacaille during an expedition to the Cape of Good Hope. Lacaille went to South Africa to catalogue the positions of thousands of stars and thereby calibrate the scale of the solar system. However, during his survey, he also found many nebulae, one of which is the Tarantula.

The moon reaches first quarter at 2.42pm this Sunday (February 2), which means that moonlight will interfere with stargazing during the early part of the night. Despite the relatively bright moon, the Tarantula should still be easily visible.