Earthshine at the equinox 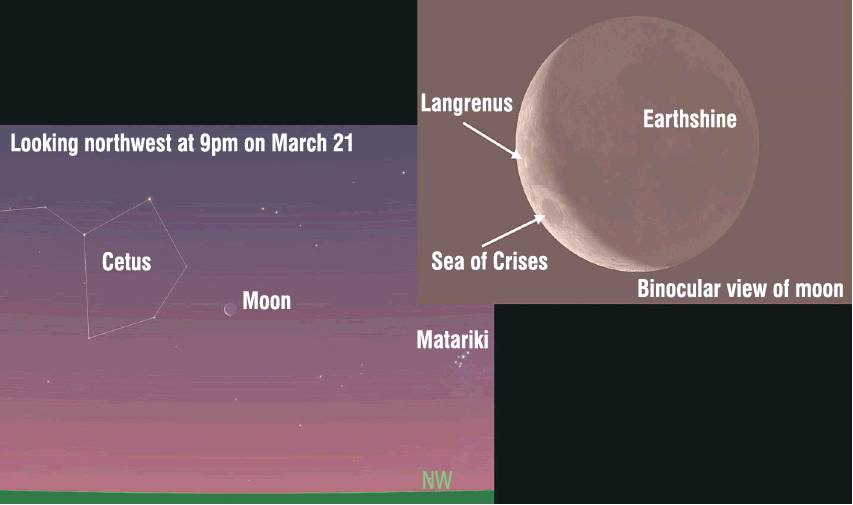 Ian Griffin is preparing for the second ''Flight to the Lights''.

At 7pm on Thursday (March 21) along with around 150 others, I will be enjoying the pre-flight briefing on board an Air New Zealand Dreamliner, with the aim of spending at least five hours watching the aurora at an altitude of 11km, high above the southern ocean, at latitudes as far as 70deg south.

Even though we are approaching solar minimum (a time when auroras are relatively scarce), I hope to have some nice pictures to share with you next week.

For reasons that aren't fully understood, there tend to be more auroras in the period around the equinox. That's why, in order to maximise our chances of seeing a good auroral display, Flight to the Lights is timed to fly near the autumn equinox, which this year occurred at 5.15 this morning.

The equinox occurs when the centre of the sun crosses the celestial equator in its annual apparent path around the sky. Because the sun is moving north in the sky, this morning's equinox marks the start of astronomical autumn here in the southern hemisphere.

Even if you haven't secured a seat on the Flight to the Lights, there are some beautiful sights to behold. The moon was new last Sunday, which means that we get to enjoy some rather splendid views of the crescent moon as the sky darkens over the next few nights.

Tonight, for example, weather permitting, the northwestern sky will be graced by the presence of a 15% illuminated waxing crescent moon. Once the sky is relatively dark, it should be easy to see the ''dark'' part of the moon illuminated by earthshine, which is sunlight reflected towards the moon by the earth.

Although only 15% of the moon is illuminated, if you have a pair of binoculars you should be able to spot Langrenus, a bright crater over 130km across excavated by an ancient lunar impact. The distinctive dark circle of the Sea of Crises is also prominent at this lunar phase.