An engineer of charity, MP to poor 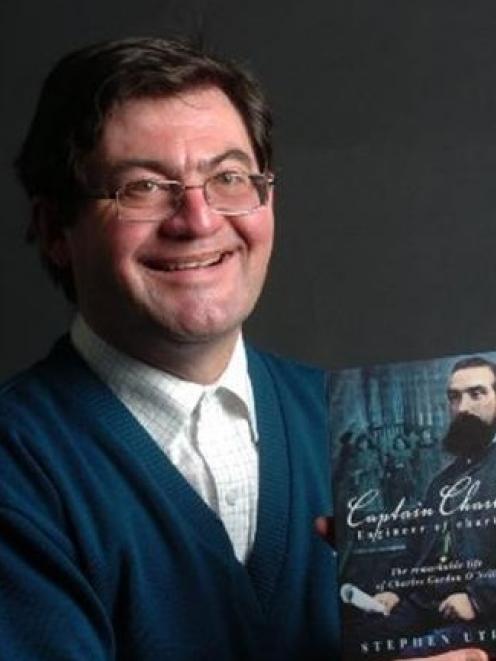 Author Stephen Utick with Captain Charles, Engineer of Charity, a biography Charles O'Neill, a colonial engineer who co-founded St Vincent de Paul in New Zealand and Australia, which has been launched in Dunedin. Photo by Peter McIntosh.
A book detailing "one of the strangest personal sagas in the colonial history of Australia and New Zealand" has been launched in Dunedin.

Author Stephen Utick, of Canberra, says Captain Charles, Engineer of Charity, the remarkable life of Charles Gordon O'Neill, follows decades of research and involves drawing together stories which have been "hidden for over 100 years" in dozens of libraries in three countries.

He was also responsible for Milton's town plan, but not, Mr Utick was quick to point out, responsible for the notorious "Milton kink" which punctuates the town's main street.

Born in Glasgow in the late 1820s, Capt O'Neill studied civil engineering and mechanics and was assistant superintendent of the city's public works.

He also served as Society of St Vincent de Paul secretary and president to the Western District Council.

Mr Utick thinks Capt O'Neill's involvement in charity work, which became a lifelong passion, was partly motivated by seeing "columns of destitute and poor" arriving from Ireland after the potato famines of the mid-19th century.

After being declared bankrupt, he emigrated to New Zealand, arriving in Otago in 1863.

As an elected MP, he argued the "the Middle [South] Island" should be politically independent and his popularity suffered.

After he returned from Parliament in 1866, a group of disgruntled constituents dumped effigies of provincialist politicians in Otago Harbour, the Otago Daily Times reported at the time.

He left Otago in 1868, and was appointed a mining surveyor and engineer in chief of railways, tramways and wharves.

While in Parliament he was concerned with provision of reserve land, the regulation of streets and approval of town plans prior to land sale.

Similarly, during parliamentary debate on a forests Bill in 1874 he also linked deforestation with climate change.

"Finding that was staggering. It could be one of the first accounts of a Western politician warning a parliament about consequences of deforestation," Mr Utick said.

Capt O'Neill moved to Sydney in 1881, and continued to work for the poor.

Mr Utick said his calls for making economic and social provision were vindicated when Australia's gold-based economy failed, resulting in the economic depression of the 1890s.

Ironically, despite a talent for engineering, politics and his entrepreneurial flair, Capt O'Neill was destitute when he died at St Vincent's Hospital, Sydney, in 1900.