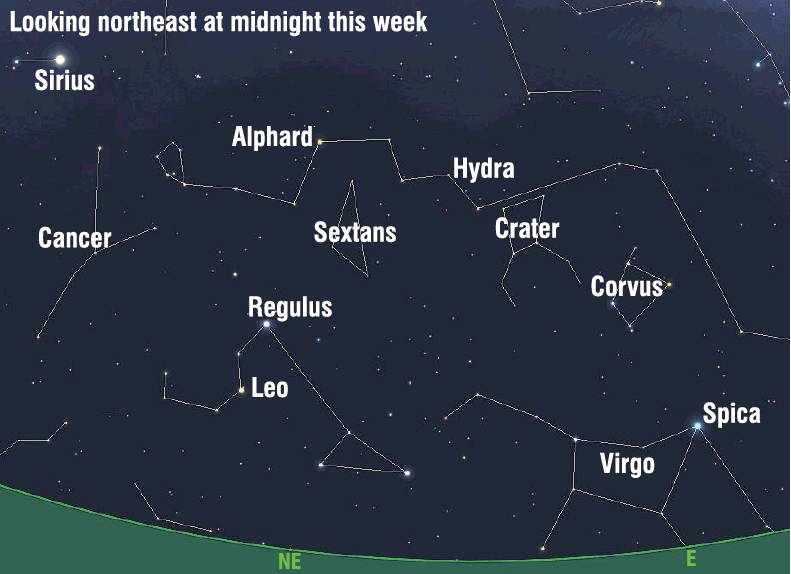 Last week, I introduced you to the beautiful beehive star cluster in Cancer, an astronomical asterism that can be seen even when the moon is bright, writes Ian Griffin.

Our closest celestial neighbour reaches last quarter-phase on Saturday, so for the next week or so, the early part of the night gets darker as the moon rises later and later. This gives Otago skywatchers a chance to check out some of the largest constellations in the heavens.

Our chart shows the northeastern sky at midnight this week. It is dominated by the constellation Hydra, the Water Snake, the largest of the 88 constellations into which astronomers have divided the heavens. Incredibly, this single constellation takes up more than 3% of the entire sky by area.

Hydra is a vast and quite indistinct constellation. According to legend, it was the snake that Hercules had to combat during his second labour. To fully appreciate its enormous arc of stars requires a trip to a site far from city lights.

The constellation’s brightest star is Alphard (derived from an Arabic word meaning “the solitary one”), which well describes its lonely location in a part of the sky devoid of bright stars. This orange-coloured star has a surface temperature much cooler than the sun and is estimated by astronomers to be 180 light years from Earth.

Several other constellations can be found beneath the arc of Hydra. Crater (the Cup) and Corvus (the Crow) are very distinct and easy to spot. That can’t be said for Sextans (the Sextant), which in my opinion qualifies as possibly the hardest constellation to locate in the entire sky. It is also a relatively young constellation, only being created by the Polish astronomer Johannes Hevelius in a 17-century sky chart.

Virgo, the Virgin, is the second-largest constellation, and, as our chart shows, can be found low in the east at midnight this week. Spica is the brightest star in Virgo and is the 16th-most-brilliant star in the entire sky. It is easily visible as a madly twinkling blue-white object some twelve degrees above the horizon.