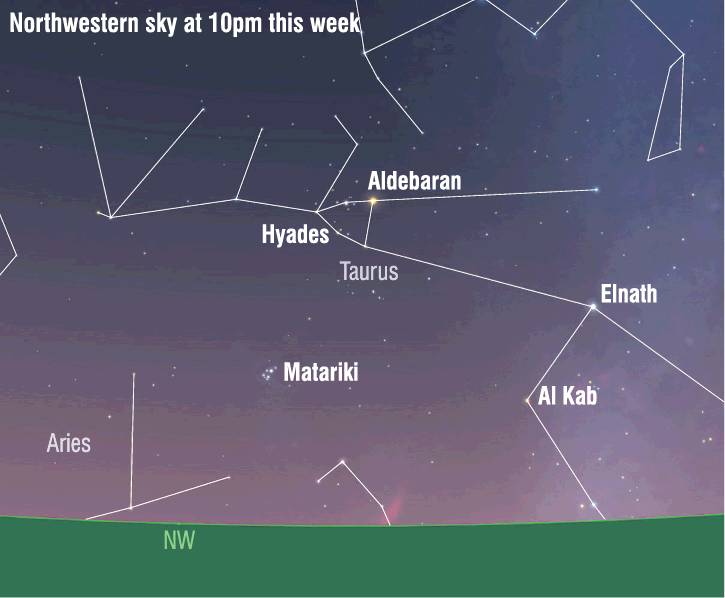 This week I'd like to encourage you to head out to bid farewell to Matariki (also known as the Pleiades), which will be swept up in the bright sunset as the sun moves north in the sky over the next month, Ian Griffin writes.

Once it disappears, we will not be able to see Matariki until it reappears in the morning sky towards the end of June.

This week Matariki sets at around 11pm. You should still be able to see this remarkable star cluster low in the northwest as the sky darkens.

If you are having difficulty finding Matariki, don't worry, as there is a convenient celestial signpost that can help. Look for a bright orange/red star about 20 degrees above the horizon at 10pm. That star is Aldebaran, which is 66 light years away from Earth and is the 13th-brightest star in the sky.

Aldebaran's name comes from from the Arabic phrase Al Dabaran, which means ''The Follower'', supposedly because the star follows the Pleiades across the sky.

Once you have spotted Aldebaran, look below and to the left; Matariki is roughly half way along a line between Aldebaran and the horizon. If you point a pair of binoculars at Matariki you will see dozens of bright blue stars. Astronomers have measured the distance to the Matariki as roughly 400 light years. They have also discovered that, on a cosmic scale Matariki is relatively young, with the stars forming less than a hundred million years ago.

There is actually another star cluster in Taurus, which while not as well known as Matariki, is also really worth investigating if you have a pair of binoculars handy. The Hyades is a ''v''-shaped cluster of stars close to Aldebaran in the sky. The ancients thought the Hyades formed the head of the Bull; astronomers tell us it's a cluster containing hundreds of stars and is roughly 150 light years away.