A fatherly hand in proceedings

The best Father’s Days cost next to nothing financially and only a bit of time, some energy, a little imagination and lots of love, says parenting columnist Ian Munro. 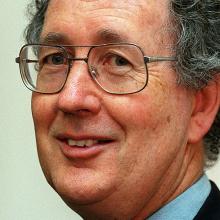 Ian Munro.
It’s Father’s Day on Sunday. Not that your letterbox will have failed to remind you.TMany talk about such days as ones that benefit retailers more than anyone else.
And there’s an element of truth in that if all you do is throw money at the day; if you take to heart the enjoinders to spend up large from the automotive, book, hardware and menswear brochures that have cluttered your letterbox over the last couple of weeks.

Or perhaps dining out is your thing for Father’s Day.

But here’s the rub: children have little active involvement and Dad may well end up paying the bill anyway. So, perhaps save the dining-out for other celebrations.

The best Father’s Days cost next to nothing financially and only a bit of time, some energy, a little imagination and lots of love.

For a start, it’s great if Dad gets actively involved when the children are very little, setting the day aside as a family day, a day when he doesn’t head off fishing, to sport or back to the office for the afternoon.

Instead of sitting back and being waited on, make Father’s Day a day when you actively work at being a father.

In fact, celebrate being a father, and spend the day with your youngsters doing things they love to do with you: maybe an outing to the beach or mini-golf, a fish-and-chips lunch by the river feeding the ducks, a trailbike ride or the water balloon fight of the century at home.

This could sound as if I’m suggesting Dad still foots the bill, but in a different way.

I’m suggesting that you get your children used to the idea that Father’s Day is a day of fun and laughter and that it’s great to have Dad around.

The rest then follows over the years.

As I might have written in the past, one of the best Father’s Days later in life after the children left home was waking to the smell of frying bacon and onions drifting up from the kitchen.

One or other had let themselves in and got to work preparing a slap-up breakfast that we ate leisurely together before they got on with the rest of their day and I mine.

It’s not much in terms of time or money but you know you are appreciated.

And that’s what’s Father’s Day is all about, not a commercially-made card day with another pair of socks or other, more lavish, gift thrown in.

In this way, Father’s Day becomes a lasting family tradition that has meaning.