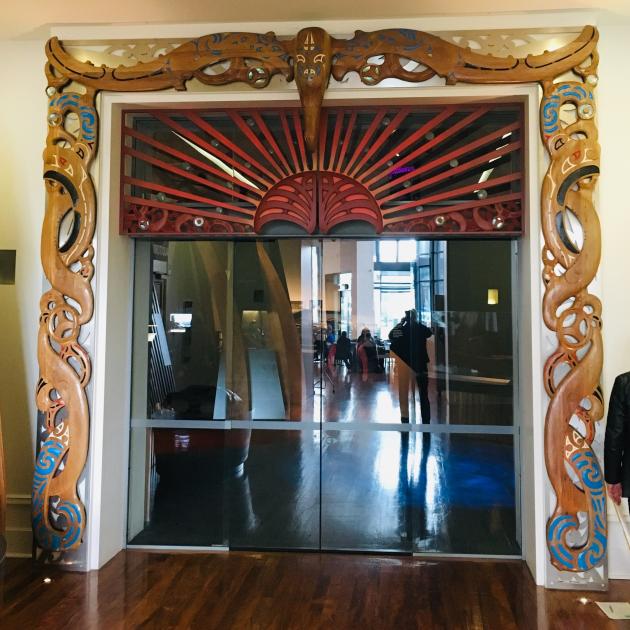 The waharoa in place at the Toitu exhibition galleries' entrance. Photo: Supplied
Visitors to Toitu’s exhibition galleries now pass under the outstretched wings of Toroa, the centrepiece of an impressive carved gateway, or waharoa, recently unveiled at the museum.

Completed by James York (Kai Tahu, Nga Puhi), the waharoa is called Te Kohoka a Toroa (the nest of the albatross). This references a uniquely Dunedin symbol, being the only city in the world to have albatross nesting within its boundaries.

Toroa was also a welcome sign that land was near for our forbears, Maori and Pakeha, approaching Otago from the sea. Its wings can be viewed as stylised whales, a reference to European whalers and their intermarriage with local Kai Tahu. They also incorporate manaia, guardians against evil that represent the mixing of all races in Otago, past, present and future.

Supporting Toroa, the two ama, or uprights, at either side each have two further manaia, representing the four Otago papatipu runaka: Moeraki, Puketeraki, Otakou and Hokonui.

Standing symbolically on their ancestral land, they hold aloft the symbol of welcome. These carved pieces are recycled rimu from a building on Quarantine Island, another symbolic link with local immigration history.

The wooden pieces attach to an aluminium frame, combining traditional and modern technology, just as the museum brings together old and new. Each aluminium section incorporates intricate patterns, those on the ama representing Kai Tahu trails and sites around inland Otago and Southland, while those behind Toroa represent the routes across the ocean that have brought people to Otago.

Set within the gateway is Tamanuitera (the sun), rising over the horizon as the dawn of a new day. Ten rays represent the 10 heavens of Maori mythology, with 18 inset pounamu disks representing on the one hand the solar system and star systems beyond, and on the other the 18 papatipu runaka of Kai Tahu. Pieces of pounamu also form the eyes of Toroa and the whales.

Beneath the sunburst are four more manaia, representing the four local runaka, the four brothers of Maui, and the people of the four winds who settled in Otago from across the sea. Other dashes of colour are provided by paua shell, and painted lines of red, white, black, blue and gold.

These represent, respectively, the intertwined bloodlines of all of Otago’s settlers, and the ocean and gold, key elements in Otago’s historic identity.