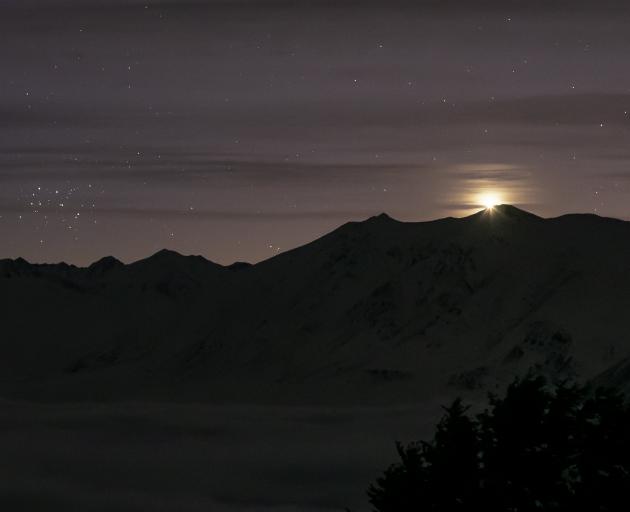 Venus flashes into view from behind Mt Dobson. PHOTO: IAN GRIFFIN
If you do anything this week, get up early and enjoy the sight of Venus and Matariki in the pre-dawn sky, writes Ian Griffin.

I spent last weekend at the University of Canterbury's Mt John Observatory above Lake Tekapo.

The year's longest nights, the dark of the moon, and some astonishingly clear weather made for perfect stargazing conditions. I was there because observatory director Karen Pollard granted me observation time to obtain images of comet Lemmon (about which I wrote last week).

With the comet setting just after 10pm, there were 10 hours before dawn. I had a large telescope at New Zealand's premier observatory at my disposal to take pictures of whatever took my fancy for the remainder of the night. To be honest, it was this astronomer's dream come true!

For two nights, I enjoyed stunning views of galaxies, nebulae and the planets Jupiter, Saturn and Mars. I got an array of lovely pictures, which will undoubtedly be super source material for future shows at the Otago Museum's planetarium.

You might think that my main memory of my weekend at Mt John would be a picture of a comet or the sight of Saturn’s rings. In fact, it wasn’t. The most amazing moment of the whole weekend occurred on Saturday morning.

I closed the observatory door and started walking to the accommodation block. As I turned around after a 15-hour shift inside the telescope dome, the sky was brightening (it was still half an hour before sunrise). I was facing northeast and the stars of Matariki were just clearing the mountains around Mt John.

I grabbed a camera from my bag to capture some pictures and started snapping away as the cluster rose.

And then I noticed a bright glow behind Mt Dobson. What on earth could that be? A few seconds later, Venus literally flashed into view from behind the peak. Wow! I was lucky enough to capture this moment, which provides this week's accompanying picture.

If you do anything this week, get up early, find a spot with a good outlook to the northeast, and enjoy the sight of Venus and Matariki in the pre-dawn sky.

You won't regret it!